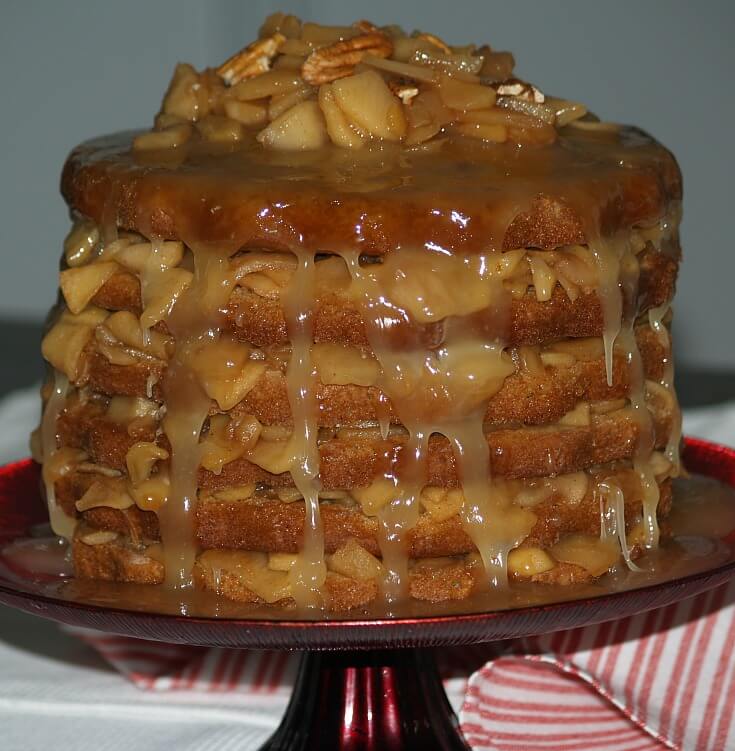 Pancakes, flapjacks and griddlecakes were all a part of my ancestry. Dad, through his German heritage, loved a huge stack of flapjacks for breakfast. He would often spread homemade applesauce, apple butter or cooked dried apples between these layers of thin cakes. On top of this stack, Dad would pour good fresh maple syrup. Add a few fresh cooked sausages with this stack and Dad thought he had a breakfast for a king. My idea is that the apple stack cake goes back for centuries to most places where apples were grown.

As I said, while learning how to make an apple stack cake recipe I found so many different recipes for this cake. The most common which I have found from the Appalachian area usually have eight thin layers and made with dried apples. It makes sense that this might be the oldest of the recipes due to these two facts. Years ago drying was the only way of preserving. The thin layers made it easier to cook over the open fire. I would also think that wherever the original cake was made, it was made with different ground grains.

When I first wanted to learn how to make an apple stack cake, I was young and still in Ohio. Several of my first recipes came from Kentucky. They were given to me by ladies who had moved to Ohio from Kentucky. In all of these, the recipes were very important to their families. These recipes were made for all important occasions and holidays. It was almost always used as a wedding cake instead of what we know today as a typical “wedding cake”. Just as a note, fruit cakes are typically used as wedding cakes in many countries of the world. For this reason, I can understand why this would be used as a wedding cake and why it might have had European “roots”.

As I mentioned before, I have found many versions since I first learned how to make an apple stack cake recipe. Today I have recipes using different batters for the cakes, different numbers of layers (From 4 to 12), different fillings and different toppings (Or no topping). Apples used still might be dried cooked apples or fresh or in the form of apple butter or apple sauce. The “apple” could be infused in the batter or used in the filling between layers. Some cake layers are even made with meringue and then filled with apples. Other ingredients you might find in the newer recipes could be various nuts. Some flavors like caramel and rum go well with apples so I have often found these in newer recipes.

HOW TO MAKE AN APPLE STACK CAKE RECIPE

Cream butter and 2 cups sugar together; add eggs beating well after each.

Blend in vanilla; chill for a few hours.

Divide dough into seven equal balls; roll each dough ball out into about 8 inch equal circles.

Bake circles on cookie sheets for 10 to 15 minutes or until slightly brown.

Spread each layer with dried apple filling; DO NOT PUT FILLING ON TOP LAYER.

Cover or place in covered container for at least 12 hours before cutting.

Learn how to make an apple stack cake recipe flavored with molasses and filled with applesauce.

Beat in enough flour to make a stiff dough; knead until smooth adding more flour if needed for rolling.

Roll dough out thin like pie crust; lay 8 inch plate on dough and cut around. (CUT 12 to 14 layers).

Spread each cake layer except for the top layer with applesauce; stack.

I found many of my recipes so similar since I learned how to make an apple stack cake recipe. The following is MUCH LIKE THE ABOVE RECIPE but I thought you might like the little difference in ingredients. This one has margarine instead of oil, more leavening and more spices.

COMBINE, BLEND AND BAKE AS ABOVE INSTRUCTIONS. 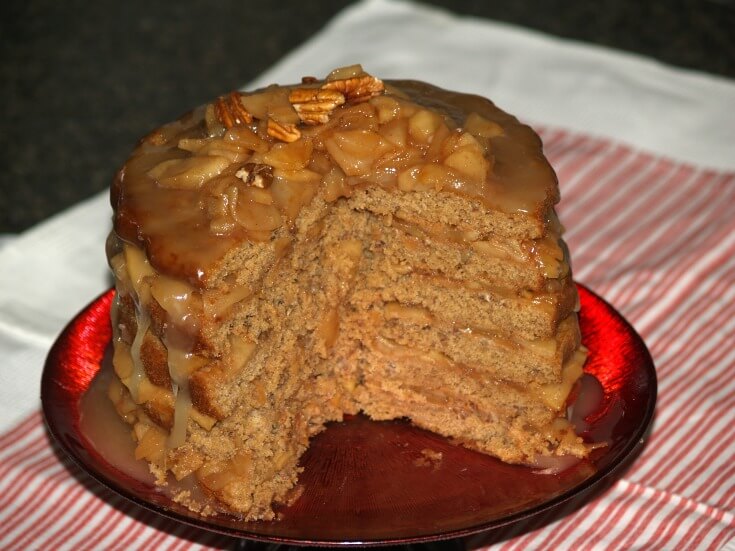 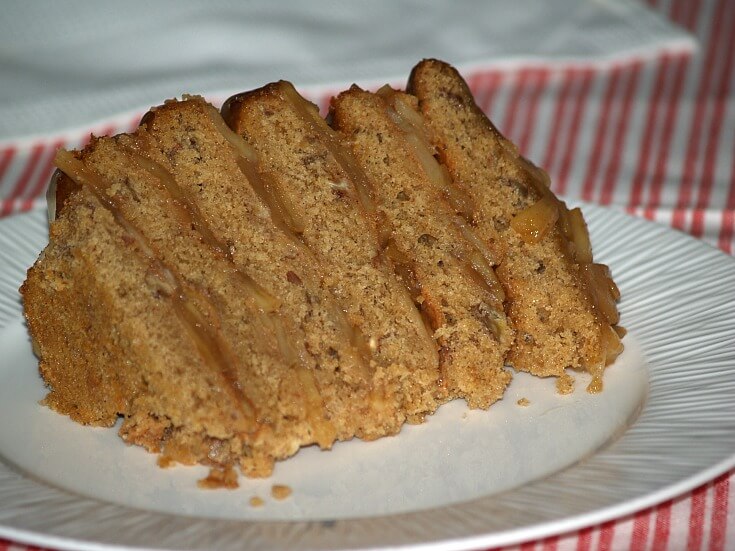 Combine all ingredients in heavy pan; cover and bring to a boil over medium.

NOTE: Because there is no liquid stir often until apples make liquid.

Reduce heat, UNCOVER and simmer until apples are tender and thickened about.

NOTE: Cook about 25 to 30 minutes STIRRING OFTEN to prevent burning.

NOTE: I keep 6 disposable pans for cakes like this; it is easier to divide the batter evenly. 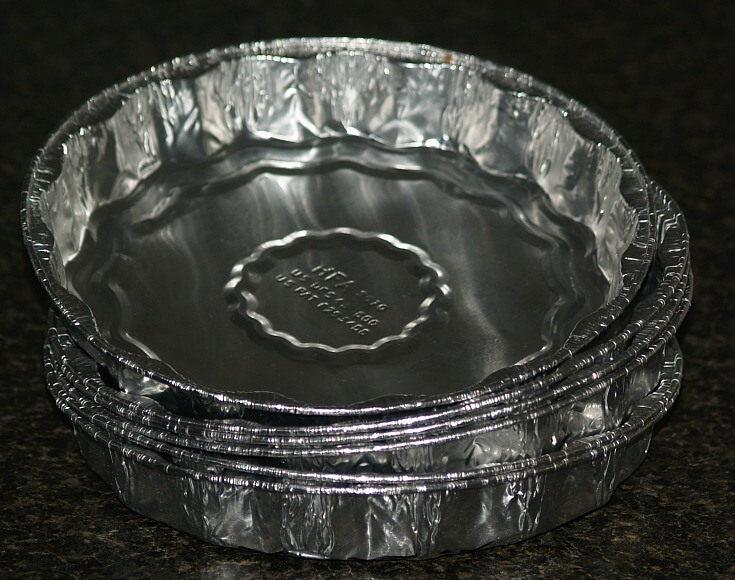 Cream butter and sugar until light; add eggs and beat until fluffy.

Combine 2 ¾ cups of flour and apple pie spice; set aside.

Combine ¼ cup of the flour with toasted pecans; set aside.

Beat the apple butter into the creamed mixture

Blend batter well; by hand stir the nut flour mixture into the batter.

Divide batter evenly among the 6 prepared pans (ABOUT 1 ½ cups (SCANT) batter per pan.

Place 1 layer on cake plate; spread out to edges with cooked apples.

Top with another cake layer pressing down slightly.

Continue with the layers and spreading with apples; DO NOT spread apples on top.

NOTE: I do reserve some of the apples for top garnish.

Prepare apple glaze and drizzle over the top; garnish.

NOTE: This cake slices better and taste best after refrigerating overnight. Sometimes I add the glaze before refrigerating and sometimes just before serving.

Bring mixture to a boil over medium heat; cook for 4 minutes.

Set off heat and stir in the vanilla; let set until warm stirring occasionally.

Drizzle over the stack cake. 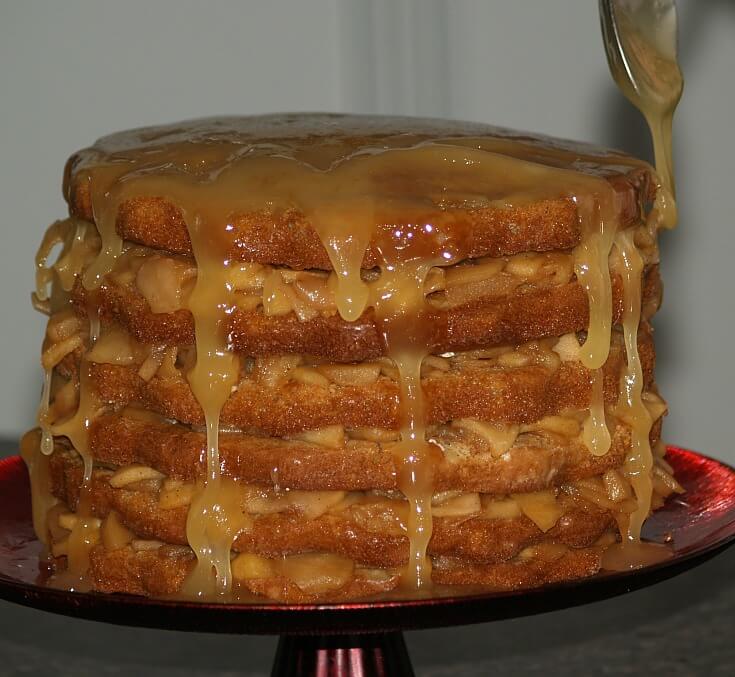 Learn how to make an apple stack cake recipe like is made in Kentucky.

TO MAKE THE CAKE cream shortening and sugar on medium speed for 7 minutes.

On low speed beat in flour mixture alternating with buttermilk just to blend.

Transfer pans to rack to cool completely; turn cakes out of pans and wrap with plastic wrap.

TO PREPARE FILLING combine apples with 6 cups of water in large Dutch oven.

Simmer uncovered 35 to 45 minutes until water is completely absorbed and apples are tender.

TO ASSEMBLE CAKE spread apple filling between layers and on the top.

Learn how to make an apple stack cake recipe with black walnuts.

Combine egg yolks and ½ cup of the sugar in a large mixing bowl.

Beat egg mixture on high speed for 3 minutes until thick and pale.

Add flour, breadcrumbs, apples and 2/3 cup of the black walnuts; beat on low until blended.

Divide batter among the 3 prepared pans; bake about 15 minutes until pick comes out clean.

Cool in pans 10 minutes; turn out on rack to cool completely.

Learn how to make an apple stack cake recipe with creamy apple filling.

Cream together butter and sugar; blend in molasses, egg and buttermilk.

Combine the vinegar and baking soda; add to the butter mixture.

Divide dough into 6 parts; press each into a prepared pan; bake 15 to 20 minutes until lightly browned.

TO MAKE FILLING combine apples in saucepan with 2 cups of water; cook until soft.

Drain apples thoroughly; mash together with cream to a smooth paste.

Add a little powdered sugar if needed for spreading; spread between cake layers (Not top).