Most cooks know how to make bacon salad dressing recipes. Bacon (In some type) has been used by countries around the world for centuries as seasoning. Nothing flavors a pot of dried beans like a big piece of jowl bacon. People of Germany and Greece love potatoes seasoned with fried bacon. I love bacon cooked with all types of greens, from wild dandelions and watercress to kale, turnip tops or spinach. 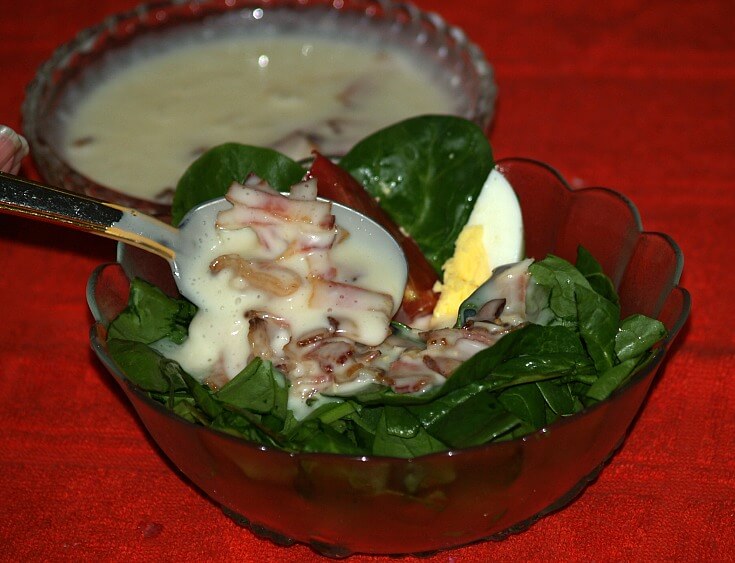 If you learn how to make bacon salad dressing you can enjoy this delicious flavor also in salads. Sometimes I love the hot bacon dressing and sometimes I like the cooler versions. Most of the time it depends on the other ingredients used. Hot bacon dressing is really good on spinach salads and potato salads. 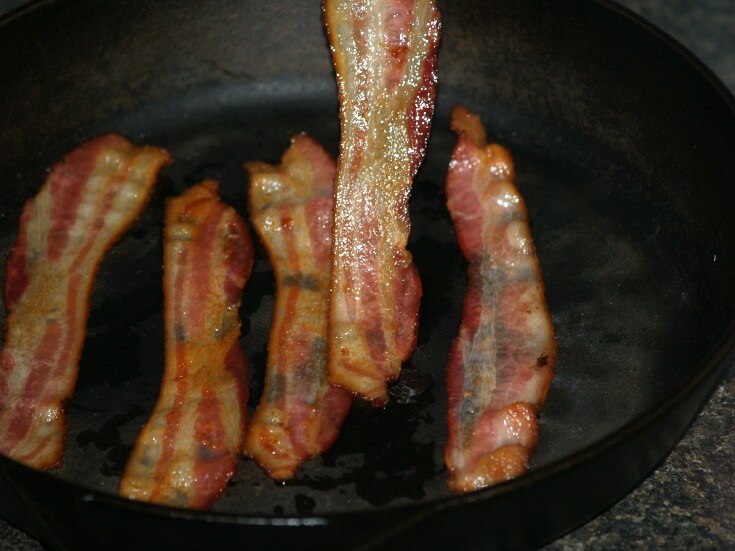 There are several types of bacon such as fresh, Canadian, salt cured and smoked. Different types and even different brands might come from different parts of the hog. Cheaper brands are mostly fat and will shrink up when fried leaving all grease and no meat. You can use different types when learning how to make bacon salad dressing but I prefer a good quality smoked bacon. This is usually sold in packages sliced and what we call breakfast bacon. 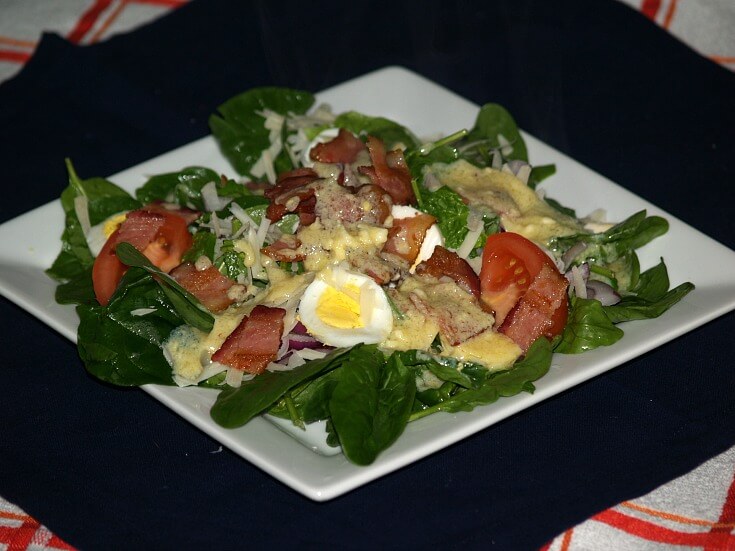 Learn how to make bacon salad dressing recipes to serve with greens.

Fry bacon until crisp; remove bacon from drippings and crumble.

Combine and mix flour with sugar in bowl; add egg, vinegar and water.

Cook and stir over medium until thickened; remove from heat and stir in bacon.

Serve over beds of spinach, lettuce or other greens.

Place bacon strips in a large skillet; cook until browned and crisp.

Remove bacon to paper towels to drain; chop or crumble.

Bring mixture to a boil and remove from heat; stir in bacon pieces and serve.

NOTE: This is good poured over a bowl of leaf lettuce, chopped green onions and radishes.

This is how to make bacon salad recipes with easy recipe.

Cook bacon until crisp; drain on paper towels and crumble.

Remove skillet from heat; and reserve 2 tablespoons of the bacon drippings.

Pour French dressing into a small bowl; stir in the 2 tablespoons of drippings.

Stir in the bacon; use immediately.

Learning how to make bacon salad dressing recipes with the “kick” of horseradish.

Combine in a bowl the sour cream, vinegar, sugar, horseradish, salt and mustard.

Whisk mixture together until well blended; fold in crumbled bacon.

NOTE: This is good on fresh spinach, with onion, mushrooms and topped with grated cheese or pecans.

How to make bacon salad dressing recipes for spinach?

NOTE: This is good over fresh spinach or lettuce.

I learned how to make bacon salad dressing recipes from Mom for wilted lettuce.

Add vinegar, sugar and salt to skillet; bring to a boil stirring until sugar dissolves.

Add bacon pieces to skillet; pour over leaf lettuce or other greens.

This is how to make bacon salad dressing recipes starting with bottled dressing.

NOTE: This is great with raw spinach and topped with hard boiled eggs shopped.

Cook bacon until crisp; crumble and set aside.

Learn how to make bacon salad dressing recipes to serve hot with spinach.

Cook bacon in a large saucepan over medium high heat 3 to 5 minutes until almost done.

Cook until vegetables are tender and bacon is crisp about 3 to 5 minutes.

Add to pan ¾ cup of the stock, sugar and vinegar; stir until sugar dissolves.

Combine the cornstarch with remaining ½ cup of stock stirring until smooth.

Add cornstarch mixture to the bacon mixture; bring to a boil stirring constantly.

Serve immediately with fresh spinach or other green; makes 2 cups.

Pour off all but 2 tablespoons bacon drippings.

Beat egg and vinegar together; add to skillet mixture.

Cook and stir over low heat until smooth and thickened; cool.

Blend sour cream and milk together; stir into skillet.

Stir in bacon until blended; chill.

Bring mixture to a boil over medium heat stirring to dissolve sugar.

Turn heat off; stir in dandelion greens, bacon and onions.

Combine sugar and remaining ingredients in a blender; blend well.

Just before serving stir in bacon and eggs; serve over spinach salad.

Brown bacon in a large skillet until crisp.

Reduce the heat; cook until shallots are translucent.

Add brown sugar and stir until dissolved; stir in bacon.

On slow speed of mixer beat mayonnaise until creamy.

Shake vinaigrette dressing and strain out solids and discard.

Add liquid slowly to mayonnaise while beating on slow until smooth. 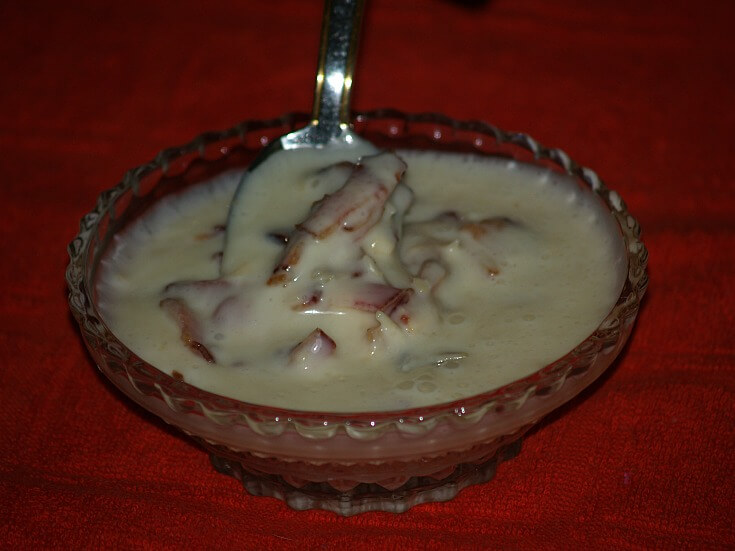 Stir to dissolve sugar; whisk in mayonnaise until smooth.

Stir in the bacon; store in refrigerator until ready to use.

Serve with spinach and salad greens.

Learn how to make bacon salad dressing recipes with the heat of Tabasco and the flavor of curry.

Allow dressing to stand at room temperature 2 hours before serving.

Serve with salad greens; serves 6 to 8.

Beat on low speed of mixer until smooth and well blended; mix in bacon.

Refrigerate until ready to serve; great with fresh greens.

Brown bacon in skillet until crisp (Lift to platter and crumble)

Bring mixture to a boil and remove from heat; stir in bacon, salt and pepper.

Remove from skillet all but 2 tablespoons bacon drippings.

Add onion to skillet and cook about 5 minutes until tender.

Add to the skillet the sugar, salt, flour, pepper and paprika; blend well.

Stir in the vinegar and water; cook and stir until slightly thickened.

Stir in bacon and parsley; good mixed in with cooked potatoes. 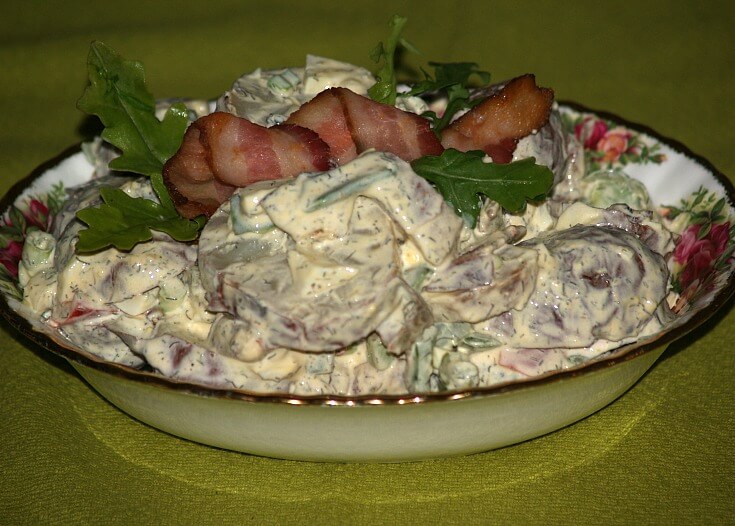 Learn how to make bacon salad dressing recipes with dill and sour cream; a great combination for cooked potatoes.

Cover and store in refrigerator until ready to serve; good tossed with diced cooked potatoes.