How to Make Brownies

How to make brownies? First, let us look at what qualities you like to have in your brownies. For many, the simple quality of being “chocolate” is enough for them. For others, the name is enough. They could be chocolate, white chocolate or white brownies as they are called or the “blonde” brownies. 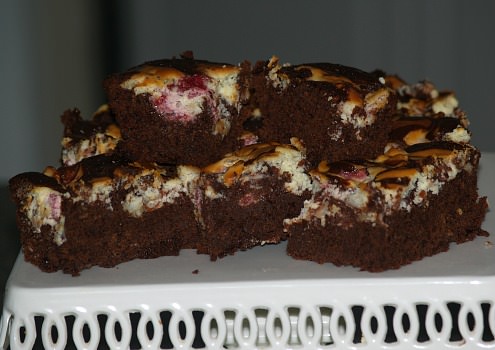 How to Make Brownies

I like chocolate but not just any chocolate. I like good quality with a rich chocolate flavor. This is especially true when it comes to brownies. I have collected and made so many brownie recipes. I cannot call anything other than deep chocolate bars by the name of “brownie”. This eliminates all the milk chocolate, blonde and white bars. Of course, the quantity of chocolate will determine the “deep” chocolate flavor. I really like at least four ounces of chocolate and the double and triple chocolate brownies.

MY BROWNIE TIP #1: As I learned how to make brownies, I learned a little trick to get a really good chocolate flavor which I like. I always do this no matter what recipe I use. As soon as I remove the brownies from the oven, I drizzle Godiva Chocolate Liqueur over the top. You can use your favorite liqueur but I found Godiva to have the best flavor. If you want to frost, let the brownies cool and spread the frosting over top.

The next characteristic which I want to achieve when baking brownies is moistness. After I learned how to make brownies I found that many came out too dry. Brownies will have a “fudgy” or “cake” texture.  I want mine to be more fudge like; I save the “cake” for cake. This texture “or moistness” is determined by the proportions of the ingredients like shortening to flour. Ingredients like eggs, sour cream, buttermilk and cream cheese also help with moistness.

MY BROWNIE TIP #2: To make sure you do not measure too much flour LIGHTLY SPOON the flour into a measuring cup and then level off with a knife. If you tap the cup when scooping or press the flour down, it will measure too much.

MY BROWNIE TIP #3: As I was learning how to make brownies, I learned the hard way how to bake brownies or “not to bake”. This is a sure way to dry them out and ruin the taste. I have found that a slow oven (From 300F to 350F degrees) produces very good brownies. When testing with a pick for doneness, the pick will still be BARELY MOIST; might still have a couple crumbs on the pick.

MY BROWNIE TIP #4: also has to do with brownie baking. Some recipes instruct the baking to be done in larger size pans. I have found the best results come from baking in 8 or 9 inch square pans. Baking starts around the outside edges. In larger pans, too often by the time the center dough is done, the outside is over baked. After I learned how to make brownies I found this can be eliminated by baking in smaller pans. For baking the larger recipes, I have found (My opinion) that Glass baking dishes turn out better brownies.

MY BROWNIE TIP #5: Since I have learned how to make brownies I never worried about storing. Around here they simply do not last long but here is how to do it. Place the brownies in a tightly covered container or leave them in the baking pan. Cover the pan or container tightly with a cover, plastic wrap or foil. Store in cool place. 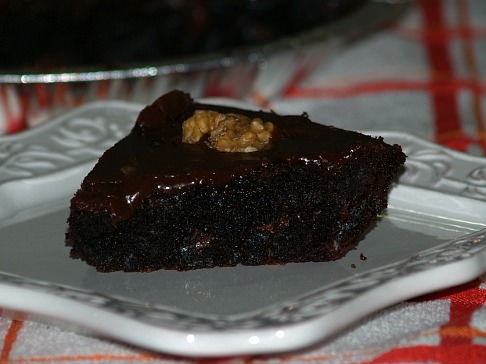 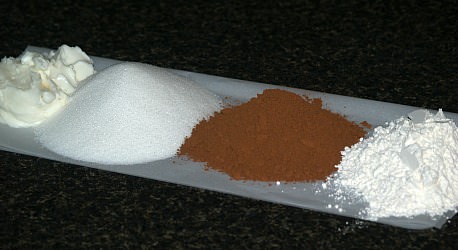 Learn how to make brownies with this mix recipe. By keeping this on hand, brownie making is easy.

Cut in shortening with a pastry cutter until crumbly; store in air tight container.

Store in refrigerator or cool place; can be stored for up to 6 weeks.

HOW TO MAKE BROWNIES with the mix 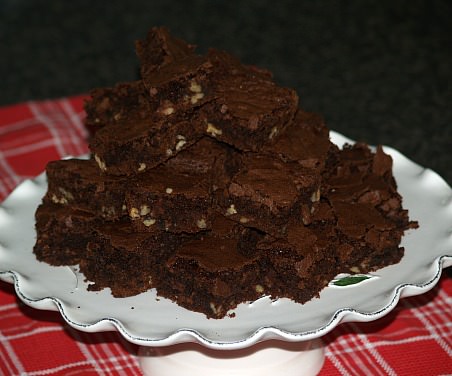 Brownies made from Brownie Mix

Learn how to make brownies quickly from a pre-made mix.

Stir until blended; pour into prepared pan and bake 35 to 40 minutes.

Cool completely and cut into bars. 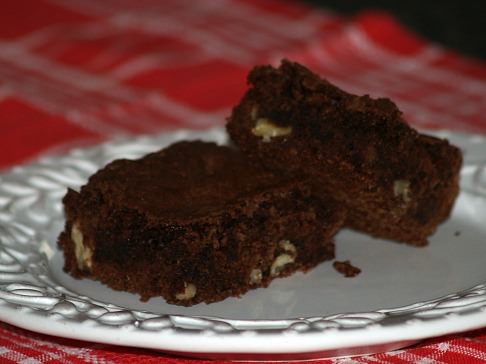 Brownies made from Brownie Mix

Learn how to make brownies that are a rich fudge.

Cream shortening and sugar; beat in eggs and melted chocolate.

Resift flour with salt; add to creamed mixture alternately with milk and water.

Stir in vanilla and nuts; spread in prepared pan.

TO MAKE BROWNIES beat sugar and butter in a large mixing bowl until light and fluffy.

Spread in prepared pan; bake for 30 to 35 minutes until pick comes out clean.

TO MAKE FROSTING melt butter in a medium saucepan over medium heat.

Blend mixture until smooth; stir in nuts and spread over cooled brownies.

TO MAKE BROWNIES combine melted butter and cocoa powder in a large bowl.

Bake for 20 to 25 minutes until set (Be careful not to over bake); cool to warm and frost.

TO MAKE FROSTING combine and beat all frosting ingredients until smooth.

Spread over warm brownies; cover with foil and store in refrigerator or freezer.

Good when cold, frozen or room temperature; makes 12 to 18 depending on size.

Learn how to make brownies with mashed potatoes.

With mixer beat eggs, sugar and vanilla in mixing bowl.

Bake in center of oven for 22 to 27 minutes until pick in center comes out BARELY clean.

Cool completely and cut into 20 bars. 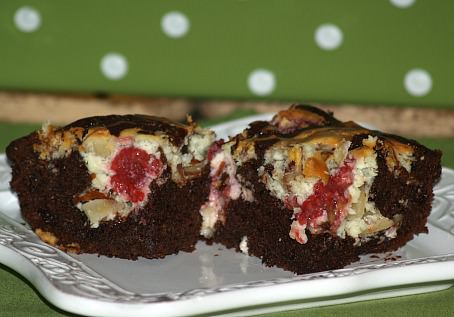 Learn how to make brownies with the raspberry cream cheese brownie recipe for the “ultimate” experience.

Whisk cocoa in the butter; cook until it bubbles.

Remove from heat; stir in sugar and preserves.

Whisk the eggs and vanilla into the preserve mixture until thoroughly blended.

Combine flour and baking soda in a small bowl; add to chocolate mixture and stir just to blend. 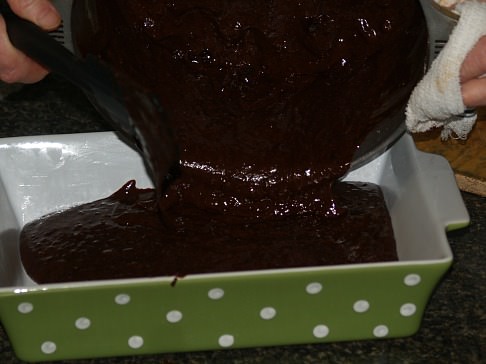 Batter for the Ultimate Brownies Recipe

TO MAKE TOPPING beat with mixer on medium speed the cream cheese, sugar, egg and vanilla until blended. 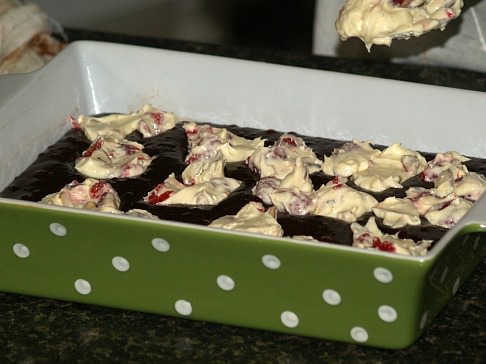 With a knife swirl the topping into the brownie batter; sprinkle with almonds. 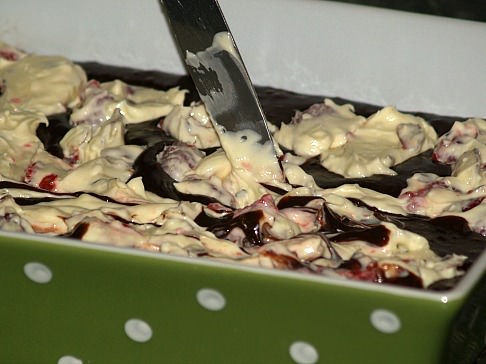 Bake for 30 to 35 minutes or until toothpick comes out ALMOST clean with a couple moist crumbs attached.

Cool completely in dish on rack; cut into 24 squares. 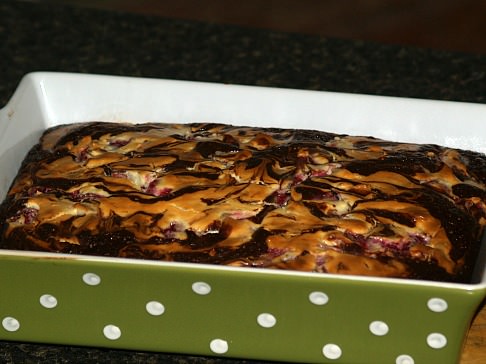 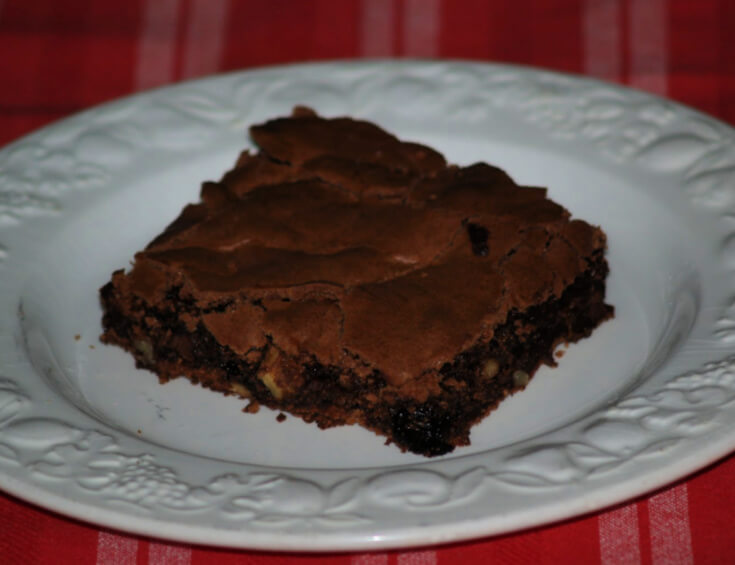 Melt 6 ounces chocolate and butter together in a bowl over simmering water in a saucepan stirring until smooth.

Sift together flour, salt and baking powder in a large bowl; set aside.

In another bowl beat eggs and sugar 3 to 5 minutes; stir in chocolate butter mixture and vanilla to blend.

Bake for 30 to 35 minutes or until firm on top; cool completely in baking dish. 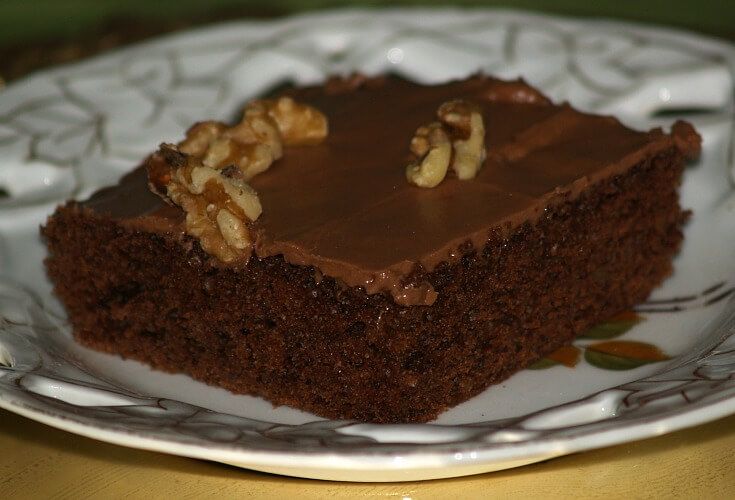 Learn how to make brownies with Bailey's Irish Cream.

Heat the sugar, butter and cocoa powder in a large saucepan over medium heat stirring until butter melts.

Remove from heat and add the eggs, baileys liqueur and vanilla; beat just to combine.

Combine in a bowl the flour, baking powder and baking soda.

Add flour mixture alternating with the milk to the chocolate mixture mixing by hand after each addition.

Stir in the nuts; spread evenly into prepared pan; bake for 15 to 20 minutes until pick comes out clean in center. 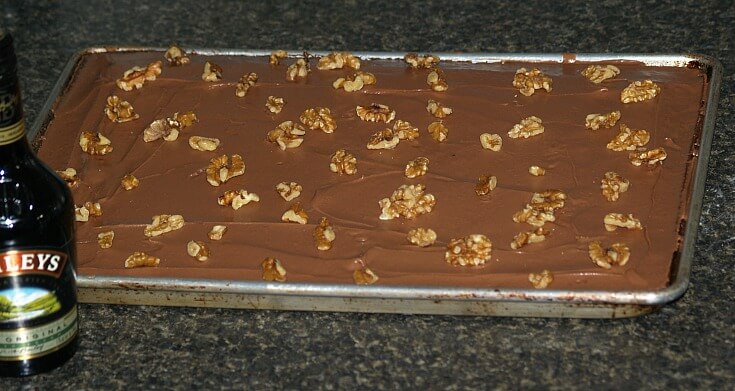