How to Make Butterscotch Pie Recipes 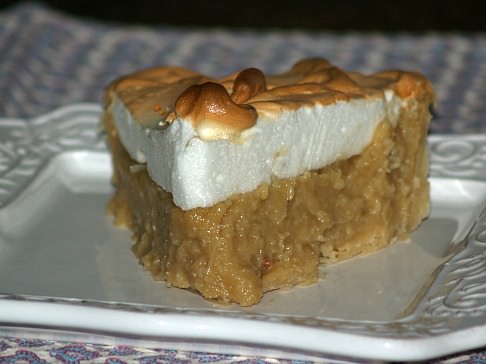 How to Make Butterscotch Pie Recipes

Actually I think the biggest difference comes only in the name “butterscotch vs caramel”.  These two names have both been popularized by candy making companies. The “scotch” in butterscotch is traced to the Scotch people where as “caramel” is more American and refers more to the color achieved. Much of my research refers mostly to “butterscotch” as in chewy candy and not as in the flavor. I would describe “butterscotch” as rich and buttery no matter what type of recipe is made.

As I said butterscotch is a combination of brown sugar and butter, along with other ingredients. As you learn how to make butterscotch pie recipes you will find the brown sugar adds to the “richness” in the flavor. The recipe might call for light brown or dark brown sugar. If a recipe calls for simply “brown” sugar, it is ALWAYS “light” brown sugar (Not dark brown). Also a note to remember is when measuring brown sugar, it is ALWAYS (In all types of recipes) firmly packed down into the measuring cup. This is done to achieve the desired sweetness and it can be done by pressing with the back of your spoon.

When you learn how to make butterscotch pie recipes you will find them with various crusts like other pies. Often you can switch these around to suit your own taste buds. No doubt you will come across recipes for meringue topping, baked plain, topped with whipped cream before serving or other toppings like nuts or crumbs.

Beat butter, sugar, eggs and vanilla in a large mixing bowl on medium speed until blended.

HOW TO MAKE BUTTERSCOTCH PIE RECIPE

Learn how to make butterscotch pie recipes with the crust and topped with whipped cream.

Roll out a little larger than pie pan; fit into pie pan, trim and crimp edges.

Cook and stir mixture over hot water until thick; stir a small amount into yolks.

Immediately return to hot mixture; cook and stir for 3 to 5 minutes.

To serve top with dollop of whipped cream if desired.

Learn how to make butterscotch pie recipes with peaches.

TO MAKE PASTRY Sift together flour and salt; set aside.

Combine shortening and boiling water in mixing bowl; beat until thick and creamy.

Stir dry ingredients in all at once; stir until dough forms.

Divide dough in 2 parts one slightly larger than the other.

Bring mixture to a boil and boil 1 minute; stir in peach slices.

Melt morsels in top of double boiler over hot water (Not boiling) stirring until smooth; remove from heat.

Spread whipped cream in swirls over the pie; chill until serving time.

Learn how to make ice cream pie with butterscotch sauce.

TO MAKE SAUCE melt butter in a heavy saucepan over low heat; add sugar cooking and stirring for 5-8 minutes.

Remove from heat; gradually stir in half and half.

Return mixture to the heat and cook another minute; remove from heat and stir in nuts and vanilla.

Learn how to make butterscotch pie recipes with pecans and dates.

Combine in a saucepan and mix brown sugar, salt, flour and cornstarch.

Add butter, dates and vanilla to mixture; cool to warm.

Learn how to make butterscotch pie recipes with meringue made with canned milk.

TO MAKE PASTRY combine flour and salt in large bowl; cut in shortening until crumbly.

Sprinkle in ice water combining with a fork until dough forms.

Gather dough up into a ball; flatten dough between 2 sheets of wax paper and refrigerate 1 hour.

Roll out dough and fit into 9 inch pie pan; trim and crimp edges.

With a fork prick all over bottom of crust; bake 12 minutes until golden brown and cool on rack.

TO MAKE FILLING combine brown sugar, flour and salt in a bowl.

Add enough water to the can of milk to make 2 cups.

In another bowl beat egg yolks; whisk in ½ cup of the diluted milk.

Transfer mixture to the top of a double boiler.

Cook and stir mixture over simmering water for 10 to 15 minutes until very thick.

Remove from the heat and stir in butter and vanilla.

Cover with round of wax paper placed directly on surface; cool for 15 minutes.

Dump filling in baked pie shell; spread meringue over the top of filling.

Bake in center of oven for 12 to 15 minutes until golden brown.

Cool to room temperature and then chill at least 3 hours before cutting.

To cut dip knife in very hot water before each cut; serves 8 to 10.

Learn how to make butterscotch pie recipes with apples.

TO MAKE TOPPING combine in a medium bowl; mix until crumbly and sprinkle over apple mixture.

Bake 45 to 50 minutes until apples are tender and topping is golden brown. 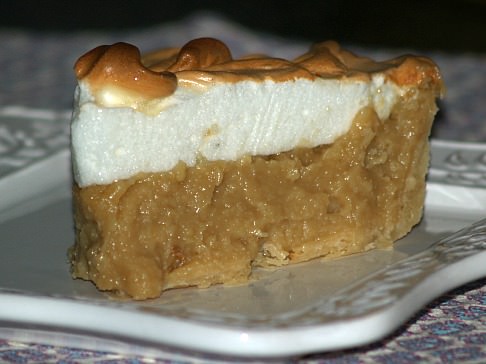 Learn how to make butterscotch pie recipes with my favorite recipe.

Melt butter in a large heavy saucepan over low heat.

Cook over medium to low heat stirring constantly until thickened.

Remove from heat; stir in butter and vanilla. (Let set)

TO PREPARE MERINGUE combine whites, cream of tartar and salt in a large mixing bowl.

Bake until meringue is golden brown; set on rack to cool.

Refrigerate overnight; cut with a sharp thin knife dipped in very hot water and dried before each cut. 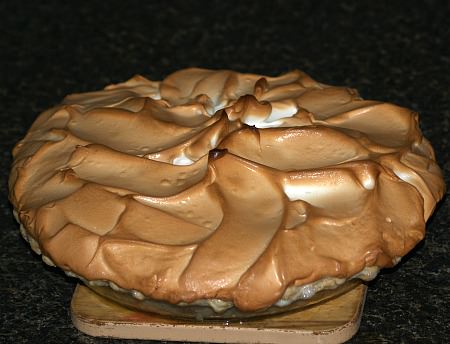