How to Make Caramels

Do you know how to make caramels?

There is just no comparison with the commercially made ones. They are just so delicious, but besides the taste this recipe has special memories for me. When I was very young and all through high school and beyond, I had a very good friend named Marileen. We were friends in school but also went to the same church in town. She was very sweet and had such a nice family. 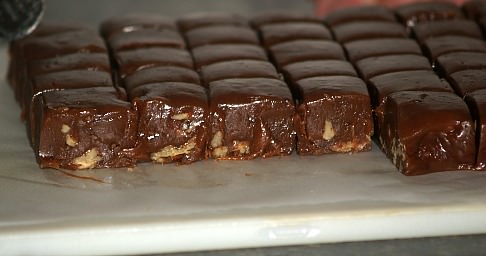 How to Make Caramels with Chocolate

Marileen’s grandmother made a homemade caramel recipe every year at Christmas time. She would also make old fashioned butter toffee and taffy but neither compared to her caramels. When we went Christmas caroling with the church, we always went to her house so she would give us all some of her famous caramels. She lived close to the church so sometimes Marileen and I would run over there between Sunday school and church or before our youth meeting on Sunday evenings just to get these cramels.

Marileen and most of her family have passed on but their names lives on through the church. Every year the church now produces those caramels with the family recipe.

When you learn how to make caramels, you will find the consistency of a recipe is determined by the finish temperature and the amount of fat which you use. The higher the temperature the chewier the caramel; the more fat used the less chewy the caramel. The main danger to avoid when making homemade caramels is crystallization. Shortly after cooling or a day or two later, the caramels may lose their chewy consistency. They may become soft and sugary caused by one of several reasons.

NOTE:  If you make your own corn syrup, DO NOT use it in candy recipes. I tried it in making caramels and the recipe was a FLOP. This was the first time my caramels failed in fifty years; also the first time I used homemade cooked corn syrup.

IMPORTANT TIPS FOR LEARNING HOW TO MAKE CARAMELS: 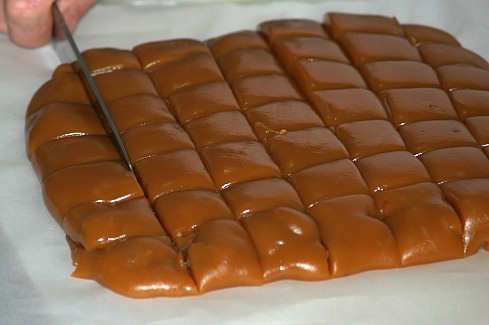 How to Make Caramels that are Creamy and Soft

Since I have learned how to make caramels, I have tried many recipes. The following one is a favorite for delicious creamy soft caramels. I want to give you some STEP BY STEP instructions which are really some basics for most recipes.

In a 4 quart saucepan combine 1 cup heavy cream, half and half, sugar, corn syrup and salt; stir well to blend.

Place on medium heat and bring to a boil stirring occasionally ONLY until boil. (This takes about 3 to 4 minutes)

REDUCE HEAT TO LOW. (Do not stir during cooking.)

Hook candy thermometer on side of pan and cook over low until thermometer reaches 234F degrees. (This takes about 32 minutes)

Gradually add remaining heavy cream; do not stir. (This takes me about 7 to 8 minutes).

Continue cooking over low heat until thermometer reaches 245F degrees. (This takes about 40 to 45 minutes).

Remove pan from heat; immediately stir in ¼ cup butter, pecans and vanilla (And optional chocolate chips) until butter is blended.

Turn out onto cutting board; cut into 1 inch squares and wrap each in small pieces of wax paper.

Allow 90 minutes from mixing to pouring into pan. 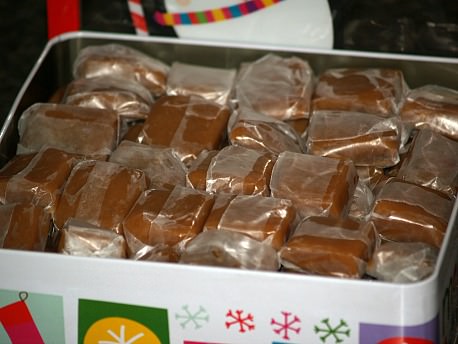 I use this caramel recipe to make turtles. Arrange three pecan halves in groups on buttered trays. Spoon about 1 tablespoon of cooked caramel on top of each group. After spooning all the caramel over the pecans, then go back and cover with melted chocolate. 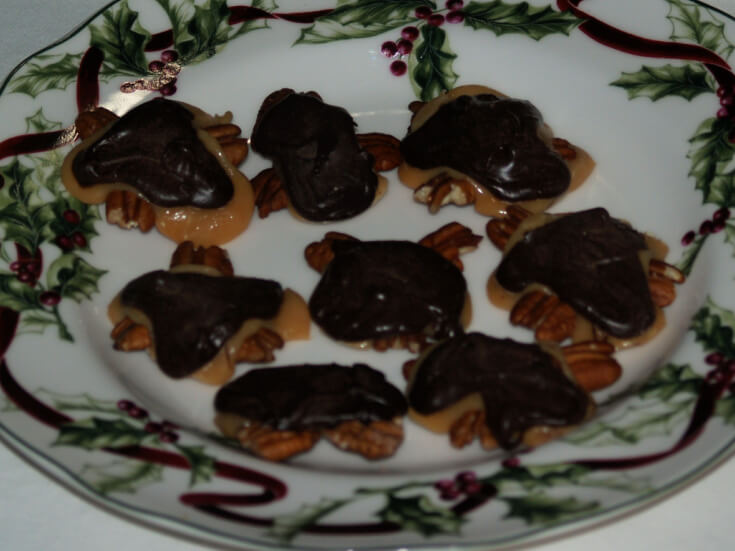 HOW TO MAKE CARAMELS 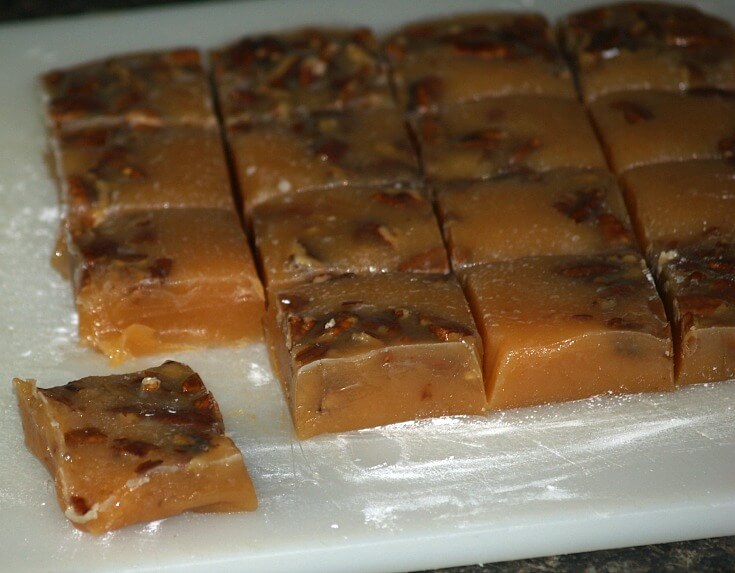 How to Make Caramels

Heat cream to lukewarm in a large heavy saucepan.

Remove 1 Cup of the cream and reserve.

Add the sugar, corn syrup and salt to the saucepan.

Add the reserved 1 cup cream very slowly so mixture does not stop boiling.

Stir in the butter, one teaspoon at a time.

Remove from the heat; add vanilla and nuts. Mix gently.

Stir only enough to distribute the nuts.

Pour into one corner of lightly buttered 8 inch square pan letting mixture flow to one level.

Do not scrap pan.

Turn candy out of pan onto candy board.

Cut into 3/4 inch squares and wrap in wax paper. 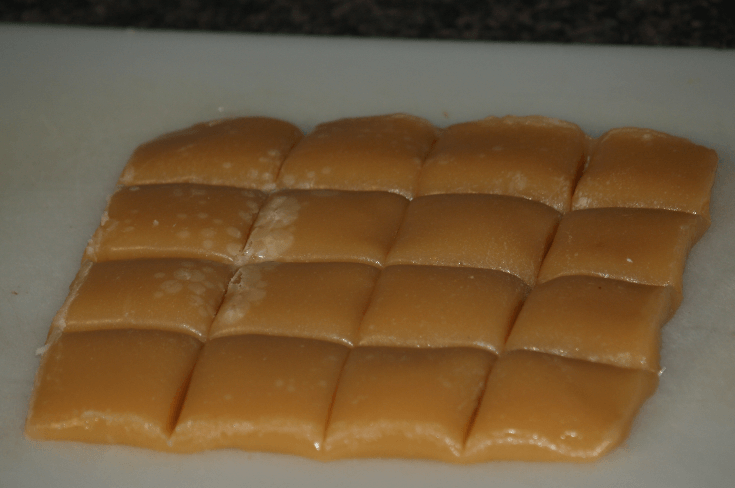 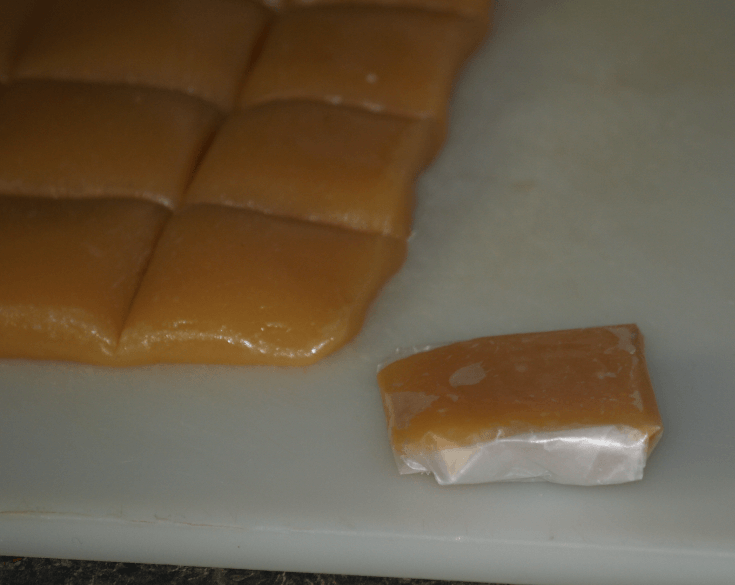 Stir mixture over medium heat until sugar is dissolved and it starts to boil.

Cook without stirring until mixture reaches a temperature on candy thermometer of 232F degrees.

Remove from heat and add vanilla; stir only enough to blend.

When caramels are firm cut into ¾ inch squares and wrap individually in wax paper.

Learn how to make caramel and make a nut roll with it. When vanilla caramel recipe is slightly cooled, shape into a long roll about 1 ½ inches in diameter; roll in chopped nuts. When firm slice in ½ inch slices. 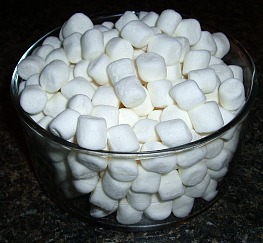 Learn how to make caramel with this delicious marshmallow layered recipe.After cooking vanilla caramel candy recipe, pour half of mixture into a buttered 8 inch pan. Top with a layer of miniature marshmallows; then pour in the other half of the caramel candy evenly over the top. Let cool and cut in squares.

HOW TO MAKE CARAMELS CREAMY

Combine half and half and whipping cream.

Combine and mix sugar, salt, corn syrup and 1 cup of the combined cream in a heavy 4 qt saucepan.

Remove mixture from heat; add vanilla and nuts and pour into prepared pan to cool completely.

Combine whipping cream and milk in top of double boiler; heat over hot water NOT BOILING.

Clip candy thermometer to side of pan; slowly add ¼ cup at a time (Total about 15 minutes) of warm cream mixture.

NOTE: For creamier caramels take 45 minutes to add all cream; STIR WELL after each addition of cream.

Allow caramels to stand a few hours to set; IF TOO SOFT refrigerate to firm.

Lift caramels out of pan with overhanging foil; peel away foil to cutting board.

With buttered knife cut into small caramels; wrap each in wax paper.

HOW TO MAKE CARAMELS for a crowd 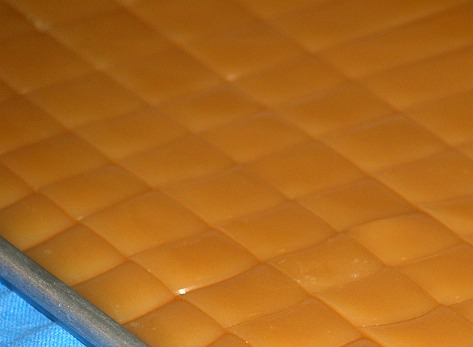 Making Caramel for a Crowd

NOTE: Use large kettle to make this recipe so it does not boil over. IMPORTANT Use a larger candy thermometer because the hot syrup will burn your hands. If you do not have a large candy thermometer you can tie a string around it so you will not get your hand close to the syrup.

When you learn how to make caramels it is important to know that most recipes for caramels cannot be doubled so this one is nice to make more in one batch.

NOTE: I poured mine into a large sheet pan 17 inches by 26 inches. I found this more difficult to handle so I recommend using the 8 inch square pans; they will also set up quicker.

Combine sugar, corn syrup and cream in a heavy pan on low heat.

Stir CONSTANTLY until sugar has dissolved.

WITHOUT STIRRING, boil mixture to a firm ball stage about 247F degrees.

Add butter stirring until it is well mixed into syrup; remove pan from heat.

When caramel is cold cut into squares and wrap each piece in wax paper. 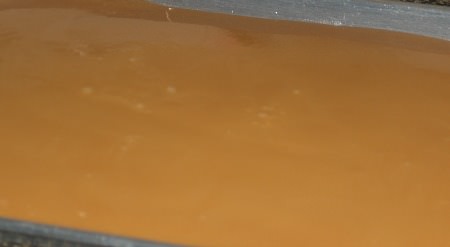