How to Make Chicken Tetrazzini

I learned how to make chicken tetrazzini because I love Italian food. Later I found that this dish is actually American. It was created in San Francisco around 1910. The American chef Ernest Arbogast named it after the famous Italian soprano singer Luisa Tetrazzini. I knew it had to be Italian inspired! I did not know the story behind the recipe but I love the flavorful ingredients. 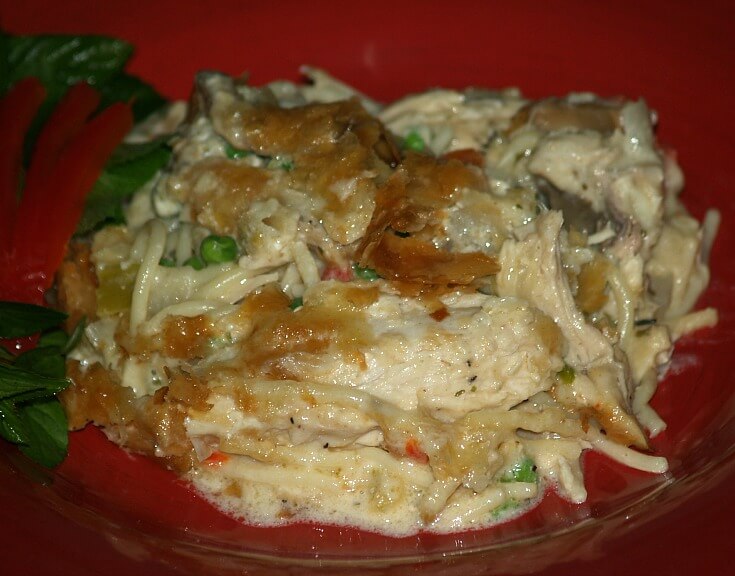 How to Make Chicken Tetrazzini

I am always amazed at how many food recipes are named after famous people. I am not surprised that this recipe is named for a soprano singer. Most that I know seem to love good food, but so do I. As I was learn how to make chicken tetrazzini I learned more about Luisa Tetrazzini. She was born in 1871 and died in 1940. Being such a famous international singer, she was a favorite of the people living around San Francisco. I found her old pictures on line interesting. Maybe you might like to check them out.

As I said, I chose to learn how to make chicken tetrazzini because I love the typical ingredients. Products like real butter, cream, cheese and pasta make this dish so delicious. They are also ones which make it high in calories. It is so good that a small portion is not enough making it hard to keep a “waistline” if you serve it often.

As I learned how to make chicken tetrazzini I found chicken was in the original recipe.  Later it was made with seafood or a combination of chicken and different types of seafood.  Since then I have come across recipes with other meats like bacon and ham.  Most recipes contain more of my favorite ingredients like mushrooms, cheeses, various seasonings, sometimes sour cream and sometimes different drinking alcohols.

There are many recipes that mix the chicken mixture with the pasta and then baked in a casserole.  The casseroles are good but I prefer (Only slightly) to serve the chicken mixture  on top of the pasta. I think this is because it is the way it has always been served to me in the restaurants in Florida. It just always tasted so good!  Sometimes I make a double recipe; serve it on top the first day and make a casserole to bake later.

HOW TO MAKE CHICKEN TETRAZZINI RECIPE 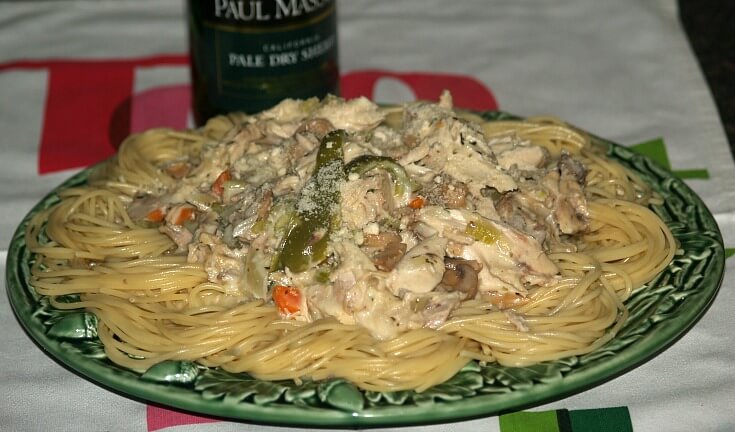 Chicken Tetrazzini Recipe made in a Pot

Learn how to make tetrazzini to serve over spaghetti like I do.

Cover chicken with water; bring to a boil and cook until tender (About 1 ½ hours).

Melt 3 tablespoons of the butter in a large skillet.

Add onion, celery, carrot and green pepper to the skillet.

Add to the pot chicken broth, sherry, parsley and thyme; bring to a slow boil.

Season the mixture with salt and pepper.

Melt remaining butter in skillet (I use the same one); stir in the flour to blend.

Add heavy cream to the flour mixture stirring until smooth.

Stir flour/ cream mixture into the vegetable mixture in the pot.

Stir pot until well blended and thickened; stir in chicken chunks and cheese.

Serve over cooked spaghetti; serves 6 to 8. 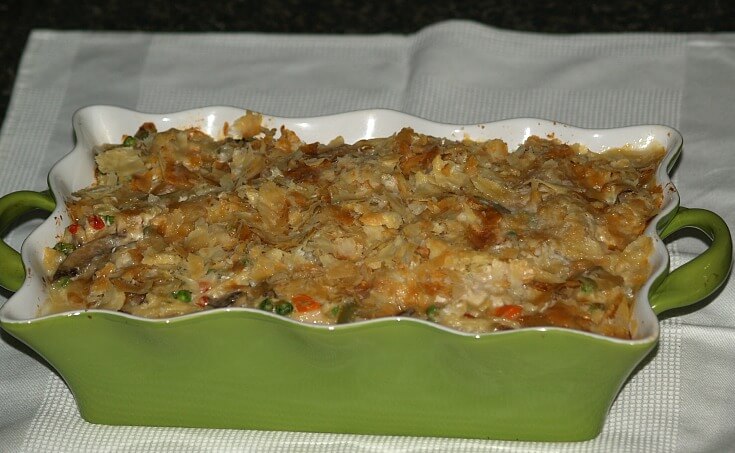 Chicken Tetrazzini Recipe made in a Baking Dish

Learn how to make chicken tetrazzini with added bacon.

Cook pasta in chicken broth  (Do not drain).

Brown bacon in skillet until crisp with onion.

In large container combine bacon mixture with pasta including broth.

Spoon mixture into a buttered casserole dish; sprinkle bread crumbs over the top.

Bake until hot and bubbly about 20 to 30 minutes.

Learn how to make chicken tetrazzini with ham.

Strain the broth and set aside; cut chicken in strips.

In a large pot of boiling unsalted water cook noodles until still firm NOT soft.

Stir in remaining ¼ cup of butter; toss until noodles are coated.

Simmer over low heat until sauce thickens and peas are cooked.

Stir in the cheese until blended; salt and pepper to taste.

NOTE: Sauce should be thick and creamy; can be thinned by adding chicken stock.

When mixture is hot (Not boiling) pour into a heated serving dish.

Learn how to make chicken tetrazzini with six ingredients.

Combine all ingredients and stir to blend.

Bake 30 minutes or until thoroughly heated.

In a large pot cover chicken with water; cook until thoroughly done.

Remove chicken from broth to platter; reserve 1 ½ cups of the broth.

Remove all bones from the chicken; cut meat into chunks.

Melt butter in skillet; add mushrooms and sauté until tender.

Add and blend in mustard, Tabasco and Worcestershire; set aside.

Layer half of spaghetti in bottom of greased casserole dish.

Top with half of chicken, half of cheese and half of mushrooms.

Pour over the top the soup and broth mixture; top with additional grated cheese.

Learn how to make chicken tetrazzini with macaroni.

Bring mixture to a boil; cover and simmer until chicken is tender about 40 minutes.

Remove chicken from pot; strain the broth and save.

When chicken is cool remove skin and bones; cut meat in slices.

Melt 3 tablespoons of the butter in saucepan; stir in the flour.

Stir in 3 cups of broth and cream; heat about 5 minutes.

Stir in the Parmesan cheese.

Add macaroni to water and cook just until soft.

Combine mushrooms and macaroni together.

Place chicken on the top; pour cream sauce over the top.

Top with additional grated cheese; bake 20 to 30 minutes until hot.

Learn how to make chicken tetrazzini with vermicelli.

Remove chicken from stock and cool; strain stock and save.

Cut chicken into small pieces and set aside.

Season mixture to taste with salt and pepper; cook over low until well heated.

Make a paste with 2 tablespoons butter with flour; blend into the chicken mixture.

Stir mixture until smooth and thickened.

Drain vermicelli and spread on bottom of buttered casserole dish.

NOTE: May be prepared ahead of time and refrigerated; will need 10 to 15 minutes additional for heating.