How to Make Chowder

Have you ever learned how to make chowder? These recipes have been popular for centuries especially among the fishing villages. Often these chowders were referred to as soups or stews. Originally anything available was thrown into the pot to make these thick soups; any extra fish, seafood and meats available. All kinds of vegetables which were grown or even things like salt pork if it was available. The word “chowder” comes from calderia or caldron which means a large cooking pot which was used over the open fire. These pots of food were often put together by the fishermen’s wives so only the extras could be used. Since its early beginnings, this thick type of stew has expanded to include many delicious combinations of ingredients.

If you are learning how to make chowder, today the recipes have grown to include a larger variety of ingredients. They might include seafood like salmon, lobster, conch, clams all kinds of meat and even a mixture of many of these. Today you will find many people who do not care for seafood but still love the vegetable chowders. These and be made with one or two vegetables as in corn chowder soup recipes or like the seafood, it can be a combination of many vegetables. There are also recipes made with other meats like ham and chicken; you might also combine any of these meats with a combination of vegetables. You will find many recipes are linked and made according to specific areas like the New England fish chowder and the Manhattan clam chowder.

If you are learning how to make chowder, regardless of the type it must be thick. Chowder is typically thickened with a mixture of milk and flour; often adding heavier creams too. There are some versions which do not use milk in the recipes like the Manhattan clam chowder recipe. It uses tomatoes and omits the milk or creams; sometimes it is still thickened with flour or it might use a grated potato. Many different foods like salt pork and many spices from onion to bay leaves, thyme, salt and pepper can be used for a great seasoning.

HOW TO MAKE CHOWDER with CORN

If you are learning how to make chowder, people who do not like seafood love this corn recipe.

Brown bacon in a heavy cooking pot. Add onion and cook until tender but not brown. Add cream and potatoes. Bring just to a boil and cook slowly until potatoes are tender. (About 20 minutes) Add corn and season to taste. Sprinkle each bowl with parsley.

Mix all ingredients except cream; heat on medium and cook for 20 minutes or until vegetables are tender.

Heat until very hot but do not boil; stir occasionally while heating. 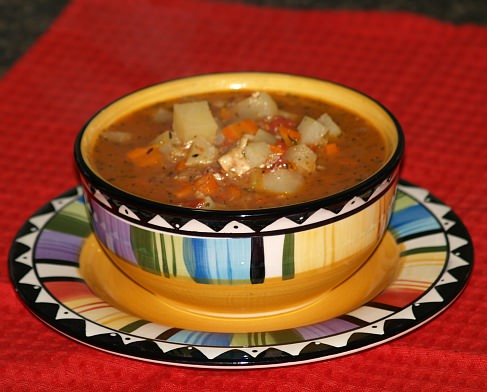 If you are learning how to make chowder, try this Manhattan recipe which is made with a tomato base instead of a cream base and seasoned with delicious spices.

Fry bacon in a large pot until crisp; add onions and cook until tender.

Add carrots, celery and parsley to the pot; cook 5 minutes while stirring.

Cover and gently cook about 15 minutes or until vegetables are tender; add Worcestershire sauce.

NOTE: Add salt to taste; much of the salt pork is very salty so it may not need extra.

Note: To make thicker peel a large potato, boil until soft and run through a sieve; stir into chowder.

Place fish with 2 cups water in a large saucepan.

Bring fish to a boil, reduce heat and simmer 15 minutes or until fish flakes; remove fish and set aside.

Add 1 teaspoon salt and potatoes to fish broth; boil until potatoes are tender.

If you are learning how to make chowder, try this delicious chicken vegetable recipe with seasoning of bacon.

Brown bacon in large skillet until crisp, add onion and cook until tender.

Bring broth to a boil in large pot; add broccoli and carrots and return broth to boil.

When you learn how to make chowder, this simple clam recipe will be a favorite.

Sauté clams and vegetables in butter in large saucepan until onions are transparent.

Simmer for one hour; if too thick add more fish stock.