How to Make Cupcakes

I learned how to make cupcakes when I was quite young. The simple reason is that they were quicker to bake than a cake. This meant that I could eat them quicker! 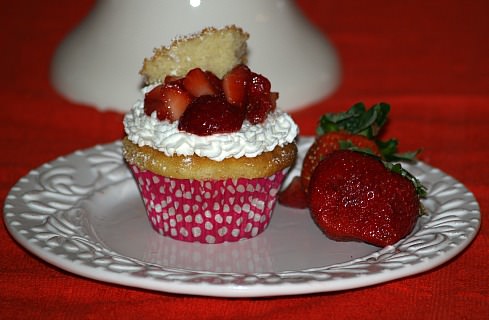 Cupcake recipes can be traced back to the 1700’s in England. In the nineteen century the love for this small cake began to grow and after the middle of the century these recipes exploded. I believe the growing popularity of cupcakes, much like other foods such as the sandwich, was a “sign of the times”. Due to the growing work force in the factories, time was becoming more valuable. These small serving, sometimes make ahead recipes, became important in the lives. Quite often they were packed in lunch boxes to take to work.

There became such a demand for these small cakes that even the Hostess Company learned how to make cupcakes. Their chocolate devil’s food and my favorite, the orange ones still stand out in my mind. Both of these were filled with white cream and oh, they were so delicious and convenient to buy. The sales of these products soared; people were buying them to snack on and not just for lunches.

Of course, before the interest grew, there were no so called “cupcake pans” or the paper cupcake liners.  Even when I learned how to make cupcakes I had none of these conveniences.  Mom taught me to make half of a regular cake recipe and to bake them in two little (rejected) baking pans. I say “rejected” because my older sisters were always passing their older things to us to use. We only had two of these pans so I had to remove the cakes to bake the others. It was good thing that these little cakes baked quickly.

When I learned how to make cupcakes, I also never had any of those paper liners. Mom did buy me some of the paper liners when we saw them available at our store but I still did not have a cupcake pan. I could not wait to try these papers out. I made the batter, placed the papers on a tray and filled with batter. Have you ever tried this? Well I found out quickly that they do not hold the shape without the cupcake pan for support; I had flat cakes.

My older sister Gloria learned how to make cupcakes many years prior to my learning. When I was little I loved to go to her house; she always had the neatest things. One day when I was there she had made a lot of cupcakes and frosted them with all colors of icing. They were so beautiful and tasted so good!  Of course, she had all the pans, papers and everything to master the job; I was so envious.

Eventually I learned how to make cupcakes with all the luxuries of baking them. The one thing that did bother me was back then the cupcake papers only came in pastel colors. Sometimes I just wanted white ones; not pink, blue, yellow or green. Needless to say, today I am stocked with cupcake liners in all colors and sizes. 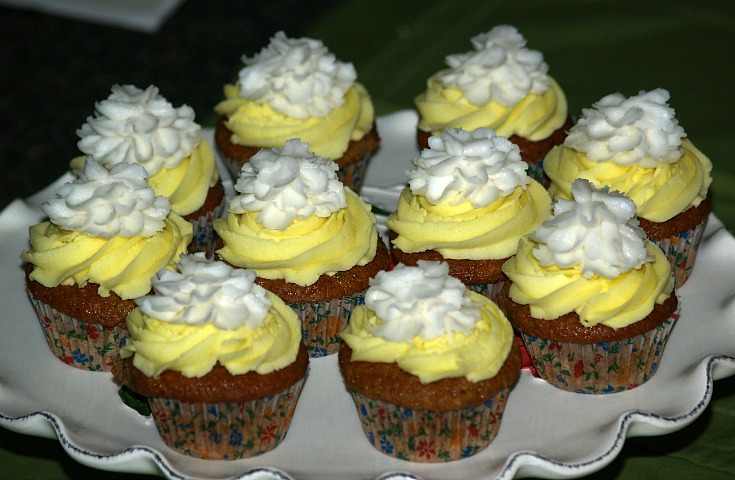 Learn how to make cupcakes with shredded zucchini. 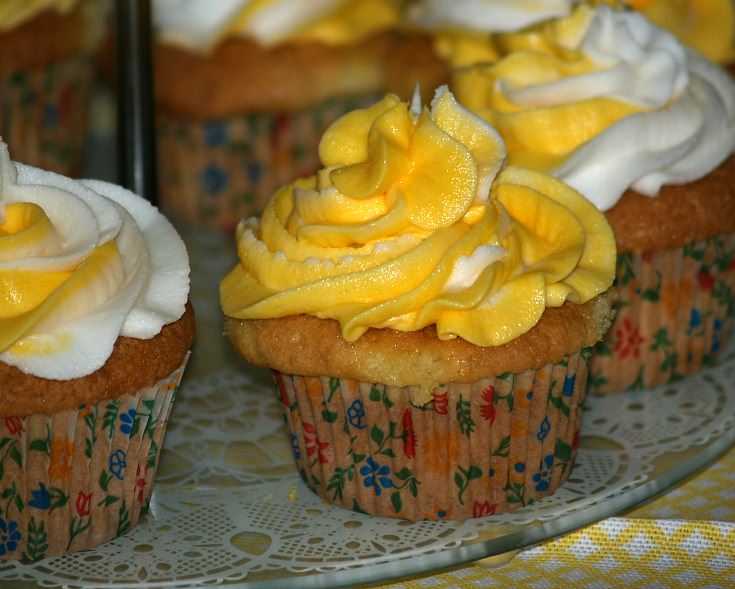 Learn how to make cupcakes with an orange cream flavor.

Cream butter with sugar; add egg YOLKS and vanilla and beat until fluffy.

Fold in egg WHITES and orange peel; fill prepared pans each with ¼ cup of batter. 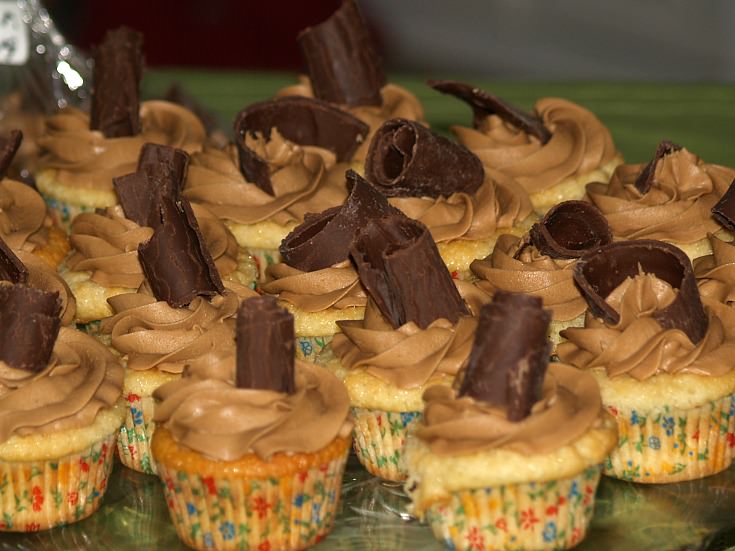 Learn how to make cupcakes with this caramel recipe and a delicious chocolate caramel frosting.

NOTE: I do not usually have half and half so I mix half heavy cream with half milk.

Combine butter and sugars in mixing bowl; beat on medium until fluffy.

Add eggs one at a time beating well after each addition; set aside.

In another bowl sift together the sifted flour, baking powder and salt.

With mixer on low add dry ingredients to the butter mixture alternating with the cream.

Beat in vanilla; fill prepared pans each with ¼ cup of batter.

Bake about 20 minutes or until pick comes out clean; cool completely.

Frost with chocolate caramel frosting below.

In a medium saucepan melt butter over low heat.

Stir in the salt and bring to a boil; cook stirring occasionally for 2 minutes.

Remove mixture from the heat and let cool completely.

In a large mixing bowl beat the chocolate caramel mixture with the powdered sugar. 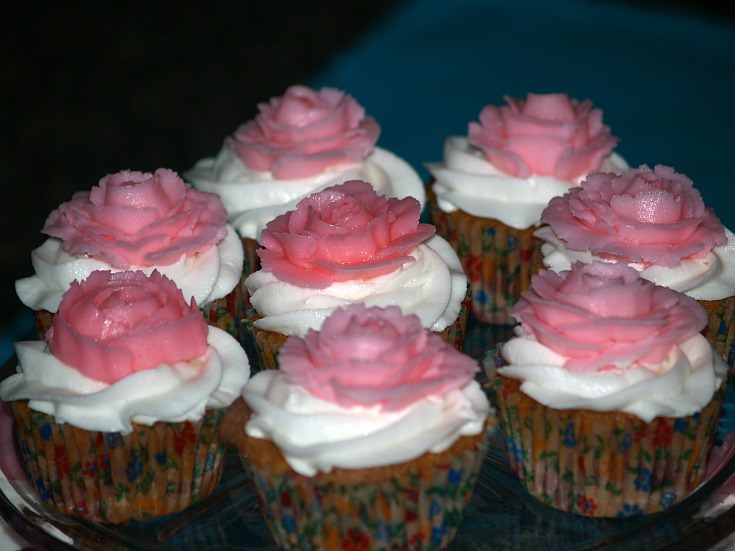 Learn how to make cupcakes with fresh strawberries and buttercream frosting.

In large mixing bowl beat butter and sugar until fluffy.

Beat in eggs one at a time; beat in buttermilk and vanilla just to combine.

In a small bowl sift together the sifted flour, baking powder, soda and salt.

Fold in the strawberries; measure ¼ cup of batter into each cupcake tin.

Bake 20 minutes; cool 10 minutes in pan and move to rack to cool completely.

HOW TO MAKE CARROT CUPCAKES

Learn how to make cupcakes with shredded carrots.

In a medium bowl whisk together eggs and oil; add mixture to flour mixture.

Bake until pick comes out clean 16 to 18 minutes; remove from pan and cool completely on rack.

Combine in a medium bowl and beat the cream cheese and butter on medium speed.

Gradually add powdered sugar while beating and beat until smooth. 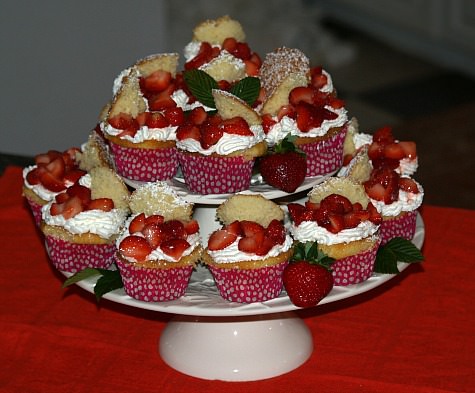 How to Make Strawberry Shortcake Cupcakes

Combine and beat on medium speed the butter and 1 cup sugar until smooth and fluffy.

Add eggs one at a time beating well after each.

In a small bowl stir together flour, baking soda and salt.

Divide batter among prepared muffin tins; bake about 18 minutes or until pick comes out clean.

Remove from pan and cool.

In another small bowl beat cream until soft peaks form.

Holding a small sharp knife with the tip at a downward angle cut around the tops leaving ¼ inch border.

Remove cupcake tops and set aside. 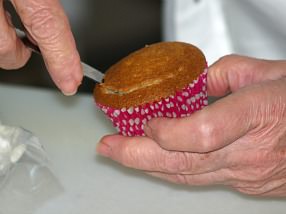 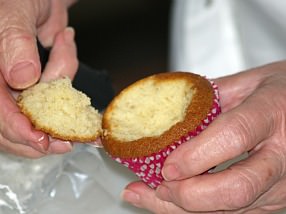 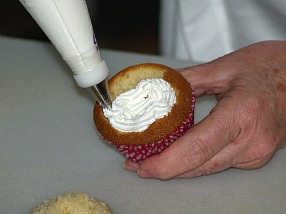 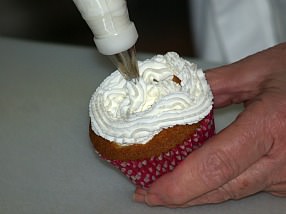 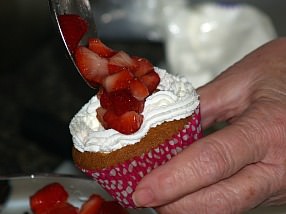 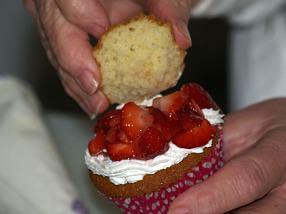 Combine egg whites, egg, applesauce and vanilla in a bowl.

Spoon half of batter evenly into prepared muffin tin.

To make filling: In another bowl beat ricotta cheese, sugar and egg white until smooth.

Stir in coconut and almond; spoon 1 tablespoon into center of each cupcake.

Divide remaining batter on top of each cupcake; bake for 28 to 33 minutes until pick comes out clean.

Cool 5 minutes; remove from pan and cool completely and dust with powdered sugar. 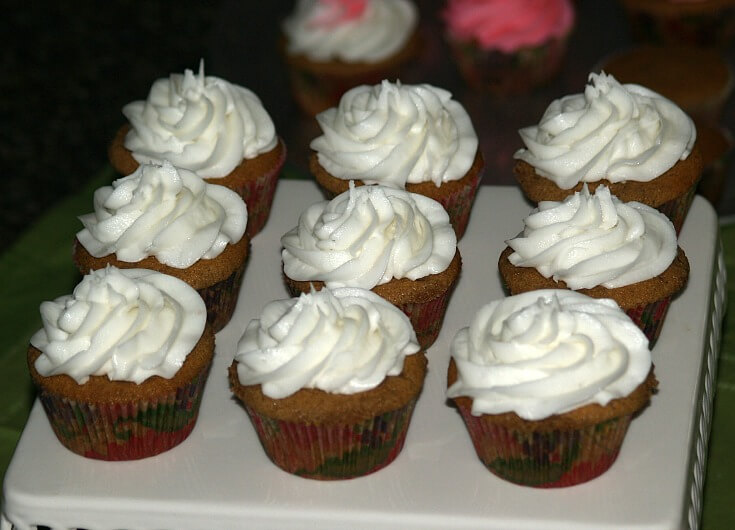 How to Make Cupcakes like this Spiced Cupcake Recipe

Cream butter and sugar together until creamy and smooth; add eggs and beat until blended.

Bake in preheated oven at 350F degrees about 15 minutes or until pick comes out clean.

Cool and frost with favorite icing.