How to Make Dill Pickles

As a child, I always wanted to learn how to make dill pickles. This was way before I ever thought I could make them. My sister, Ardice usually kept a small jar of dills in her refrigerator. This was one of the reasons that I loved going to her house. Back then I thought these delicious slices in that small jar were miraculously made by someone far larger than me. I never dreamed that I would ever learn how to make them. 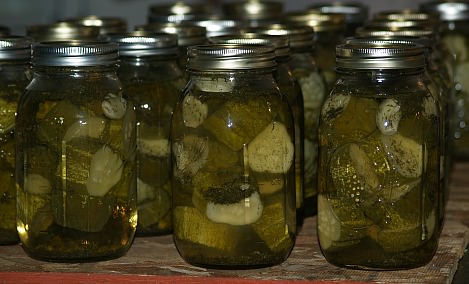 How to Make Dill Pickles

Mom and Dad canned many pickles but nothing that tasted like my sister’s. They mostly canned German sour pickles which did not have dill in them. Also, remember back then we did not have all these “hamburger joints” like we do today where dill pickles are common place.  When I got a little older, I remember Dad stopping at White Castle when we made trips to Cincinnati to see Sister Lillian. I think the one reason I loved those White Castle Burgers is because of all the dill pickles I got on my little burger.

Until I learned how to make dill pickles I could never have realized how easy they are to make. Some can be as easy as pouring brine over cucumbers or other vegetables and storing them in the refrigerator. Of course, how many we make must be limited depending on the space in our refrigerator. Even the other recipes are quite simple because they all contain vinegar. The vinegar is very acidic so the pickles require no pressure canning. The pressure canning takes more time and effort.  Normally the canning of vegetables requires pressure canning for safety.

NOTE: Most recipes do not specify the type of vinegar. I use white “distilled” or apple cider vinegar interchangeably. The main thing to check is the acidity percentage. It should always be around 5% to process correctly.

Some recipes will instruct you to fill the jars and simply seal with lids. I almost always choose to process the jars in a boiling water bath. I do this for at least 10 minutes to make sure they seal. The reason people do not like to use the boiling water bath is that the heat will soften the pickles. The longer you process with heat, the softer the pickles.

When learning how to make dill pickles you will find various tips on preventing too much softening. A common ingredient in most pickle recipes is salt. Most recipes will specify kosher, canning or natural salt. Dill pickles need to go through a curing process. Salt, sugar, spices or combinations creates acid which helps this fermentation along. Salt also helps to make finished pickles crunchy. If a recipe does not specify a certain type of salt, use canning or a natural one like sea salt.

Another ingredient found in many pickle recipes is “alum”. Alum (Also known as potash alum and potassium sulfate.) is the type you find in the spices at the grocery store. It is used for all kinds of pickling and is also found in baking powder. Alum is used to make pickles crisper. Alum does contain aluminum which is why many people hesitate or refuse to use it.

Another tip I found for helping the crispness when I learned how to make dill pickles is adding a grape leaf.  Add a fresh grape leaf (or piece of large one) at the top of each jar before filling. This was the first year that I had access to fresh grape leaves to use in my pickles. I washed the leaves and dried them first. I tucked the smaller whole leaves in the top of each jar. The leaves which were extremely large, I cut in half before using. After about six months, I will do a crispness check (That is if any are left then.)

When learning how to make dill pickles many seem to have problems with too soft or salty pickles. Many recipes instruct a “salt soaking” before the canning. This salt must be thoroughly washed from the pickles. Do this by rinsing several times with fresh cold water and draining thoroughly each time. I have also had a few recipes which I simply cut the salt a little.

As I mentioned above, soft pickles often come from processing in heat too much. Have the processing water boiling when putting in the jars and start timing at that minute. If your jars are cool, you can set them in the sink in warm water first to prevent the jars from breaking. As soon as the processing time is up, remove the jars to a towel covered counter to cool. Place the jars far apart so air can flow through allowing them to cool quicker. You can also try the alum or grape leaves which I mentioned above to make crisper pickles. 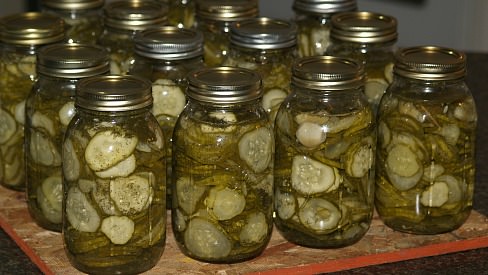 Learn how to make dill pickles with this easy recipe. Cucumbers can be whole, speared, sliced or cut into chunks.

Place cucumbers in a large container (I prefer one with a flat bottom.)

Layer cucumbers with ice and cover top with ice; cover with a large clean towel and let stand 3 hours.

To each jar add a little red pepper if desired, alum, garlic and head of dill.

Combine vinegar, water and salt; bring to a boil and boil for 10 minutes.

NOTE: Brine is enough for 7 quarts. You may want to multiply the recipe.

Process in boiling bath for 10 minutes.

Learn how to make dill pickles that are sweet and sour. These make are a great ingredient to add into many salads.

Wash cucumbers; trim off ends and cut into 1 inch chunks.

Dissolve sugar and salt in the vinegar and water; bring to a boil.

Pour boiling mixture over the pickles in the jars leaving ½ inch headspace.

Combine in a saucepan the vinegar, water, sugar and salt; bring to a boil.

Tie pickling spices in a cheesecloth or spice bag; place in hot liquid.

Bring liquid to a boil boiling for 10 minutes; remove spice bag and discard.

Learn how to make dill pickles with other vegetables beside cucumbers. This one is made with yellow squash and zucchini squash with green bell peppers, red bell peppers and onions.

Combine sugar and vinegar in a nonreactive saucepan until sugar dissolves.

These will keep in the refrigerator for up to 2 months.