How to Make Doughnuts

When I learned how to make doughnuts, I quickly broke them down into two categories; yeast doughnut and cake doughnuts. Both of these groups are usually fried, (only occasionally baked) but still to me are very different in taste. Sometimes I get hungry for the yeast doughnut and other times I get hungry for the cake ones. It is kind of like the desire you might have for a cookie over a cupcake.

When you are learning how to make doughnuts the majority of information available traces the origin to America. Almost every country has its own version of fried dough and I call all of these donut recipes. They may be called crullers in Germany and other European countries, loukoumathes in Greece, churros in the Spanish countries and a variety of other names in other countries. Some donut recipes are baked but to me they must be fried. Without the oil in the frying process, the taste and texture is different which takes away from the doughnut characteristics. 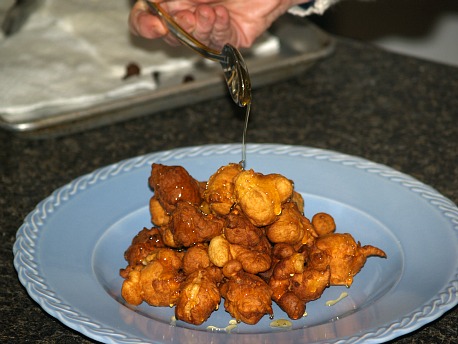 How to Make Doughnuts and Drizzle with Honey 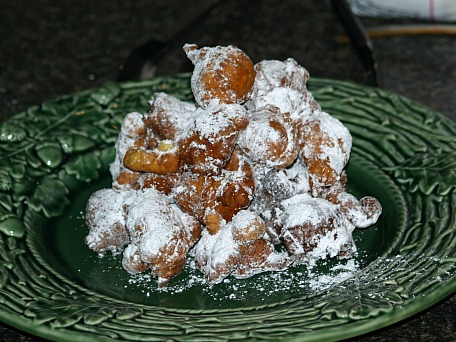 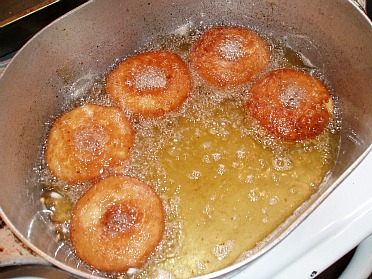 How to Make Doughnuts

I learned how to make doughnuts when I was older even though they are very American; this is not something I grew up making.  For some reason Mom or Dad never made any kind of fried dough.  When I was in my early teen years, a donut shop opened fairly close to our house. I say fairly because we were in the country so anything close to a mile was close. Someone brought us some donuts from this shop and got us started; they had the best doughnut recipes. Mom let me ride my bike to the Donut Stop one day because she was so hungry for one of those donuts. This day stuck in my mind because I was not allowed to go anywhere by myself; all for a donut.

Many of us get hungry for a donut from time to time. We will often run to a bakery or commercial shop to buy them not realizing how quick and easy learning how to make doughnuts are; plus they are so delicious. Another important factor is that homemade donuts are so cheap to make. I learned how to make doughnuts with the first basic recipe below. I say it is basic because it is delicious as a simple drop doughnut or it can easily be changed to make a variety of different donuts.

NOTE: It is better if you have an automatic deep fryer to cook the donuts in. If not, attention needs to be given to keeping the oil at the right temperature so it doesn’t get too hot. When the oil gets too hot it will over brown the outside leaving the inside doughy.

Powdered sugar or mix granulated sugar with cinnamon in a bag to coat the donuts.

Sift together the flour, sugar, baking powder, salt and nutmeg.

Mix in the oil, milk and egg until well blended.

Cook until brown; drain on paper towels and drop into the bag of sugar. Remove from bag to a platter.

Turn the dough onto a floured board and knead until rolling consistency. Roll to ¾ inch thick. Cut with a donut cutter or use a glass and shape a hole in the center with your fingers. Drop in hot oil and fry until brown on both sides. Drain on paper towels. Drop in bag of powdered sugar and shake to cover. Remove to tray. THESE ARE DELICIOUS! 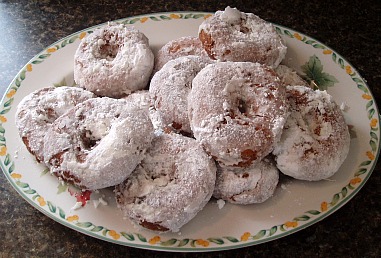 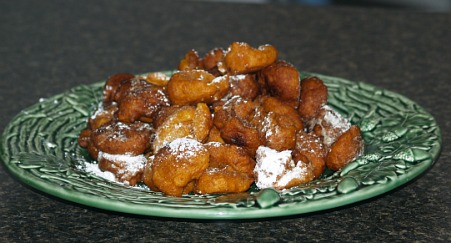 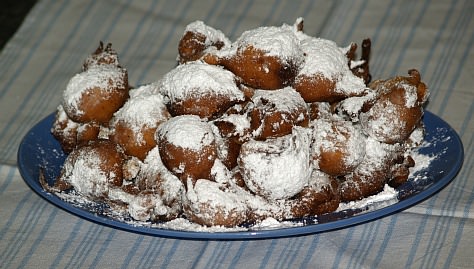 If you like doughnuts, you will love to learn how to make doughnuts with cheese!  You will not be able to stop eating the delicious little fried drop doughnut recipe.

Beat together cottage cheese and sugar; add the eggs and beat until well blended.

Add the baking powder, flour and salt and beat until blended.

Beat in vanilla; drop by teaspoon full into hot oil.

Cook until light brown; remove from oil to paper towels to drain.

Sift with powdered sugar and serve.

Add the yeast to water in a cup; set aside.
Pour scalded milk into a mixing bowl; add sugar and salt.
Blend mixture together and cool to lukewarm; stir the yeast mixture and add to milk mixture.
Add the shortening, eggs and flour; beat vigorously until the batter is smooth.
Cover and let rise about 30 minutes or until doubled in bulk.
Stir down and let rest; heat oil 350F degrees in heavy pan.
Drop batter by teaspoon into hot oil; turn and fry on all sides until golden brown.
Drain on paper towels; drizzle with honey and sprinkle with cinnamon.

When I learned how to make doughnuts I found this to be a very popular Danish recipe.

Soften yeast in warm water for 5 minutes; stir to blend.
Measure sugar, salt and shortening in mixing bowl; add hot milk and stir until shortening melts.
Add 2 cups of flour and beat by hand until batter is smooth and elastic.
Add yeast and eggs and stir until blended; stir in 1 ½ to 2 cups more of flour.
Add enough additional flour to make a dough which does not stick to your fingers.
Turn onto lightly floured board and knead about 2 minutes or until springy and elastic.
Grease bowl with shortening; shape dough in ball and place in bowl.
Grease top of dough, cover and let rise until double in bulk about 1 ½ hours.
Punch dough down, roll to ½ inch thickness on lightly floured surface and cut with donut cutter.
Let rise uncovered in warm place until doubled in bulk about 30 minutes (light crust will form on top)
Heat shortening to 365F degrees; drop in only a few doughnuts at a time
NOTE: At this temperature a 1 inch square piece of bread will brown in 60 seconds.
As soon as the donut rises to the surface and begins to show color turn it over.
Turn over again as soon as underside is brown; remove from oil when all is golden brown.
Drain on absorbent paper; shake in granulated sugar or powdered sugar in paper bag to coat.

CRULLER RECIPE (Use above recipe to make crullers)

Fold strips in half, pinch ends together; twist strips.

Turn cruller over and fry until golden brown on all sides; drain on paper.
Cover with sugar.

JELLY DOUGHNUT RECIPE Use recipe above to make jelly doughnuts)

After dough has doubled roll to ¼ inch thickness; cut in 2 ½ inch rounds.

Brush edges of ½ of rounds with water; place 1 teaspoon jam or jelly in center of half of the rounds.

Top jelly rounds with another round; press edges together to secure.

Let doughnuts rise until double in bulk about 30 minutes.

If you want to learn how to make doughnuts for cake crullers instead of ones made with yeast dough (like the one above) try this recipe.

Combine sifted flour, baking powder, salt, nutmeg and cinnamon; sift together.
Cream shortening and sugar; beat until light and fluffy.
Add eggs one at a time beating after each.
Add milk and flour mixture alternately to creamed mixture.
Roll dough on lightly floured surface ½ inch thick into an oblong 8 inches long.
Cut 1 inch wide strips; fold strips in half and twist.
Connect both ends together making a circle; pinch ends together.
Fry in deep hot fat (365F degrees) 3 to 5 minutes until golden brown on both sides.
Drain on absorbent paper.
Combine a little milk with powdered sugar to make a glaze to coat.

Learn how to make doughnuts from Scandinavia baked in an Aebleskiver stove top pan.

Butter each cup in an aebleskiver pan; set aside.
In large mixing bowl beat the egg WHITES on high speed until stiff peaks form; set aside.
In a small mixing bowl blend egg YOLKS, baking mix and milk on low speed.
Fold the yolk mixture carefully into the beaten egg whites.
Heat the prepared pan over medium heat; fill 2/3 full with batter.
Cook until surface is bubbly and underside is light brown.
With skewers, fork, little spatula or etc. carefully turn the aebleskiver cookies.
Cook until golden brown on other side; sprinkle balls with sifted powdered sugar.
NOTE: Serve warm balls with lingonberries; makes about 40 balls.