How to Make Dumplings American Style 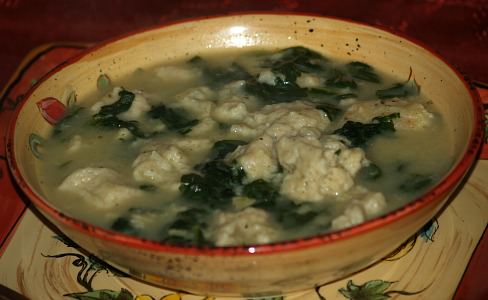 How to Make Dumplings

MY ONE TIP FOR MAKING DUMPLINGS: When cooking, make sure the liquid is boiling to prevent the dumplings from being soggy and do not overcrowd the pot.

When I was learning how to make dumplings, I thought they were pretty much the same. I was surprised to find so many different kinds of recipes. There were ones for dinner and ones for dessert but it did not stop there. One of the most interesting dumpling recipes dates back to before my birth. I say interesting because it is made by cooking all the dough together instead of in small pieces or small amounts of dough. Below you will find the old fashioned berry dumpling recipe which is made like this.

Dumplings are made with many different ingredients. Some contain leavening and some do not. Of course the leavening makes the dumpling lighter but too much leavening will cause them to fall apart when cooking. A good way to cook light leavened dumplings is to boil them gently in fruit. A quart of berries can be dumped in a pot and heated to a slow boil. Simply drop dumpling into the berries and after 10 to 12 minutes you will have a delicious dessert. Top it with ice cream!

Personally, I prefer no leavening in my dumplings when I cook them with chicken. I like the firmer texture which you get without leavening. I roll them out into small squares and drop into the chicken broth after I completely cook the chicken and remove it from the pot. The leavening is not the only difference in making dumplings.

When you really get into learning how to make dumplings, you will find many other ingredients added. A common ingredient found in dumplings is the egg. Some recipes might include a variety of herbs such as parsley or chives. I have even added herbs to plain recipes for added flavor. Try it!

When I learned how to make dumplings, I was surprised to find so many recipes which included different cheeses. These were both for entrées and desserts. Some forms of potatoes like mashed, grated or potato water are used in dumplings. Also, dumplings are made with many types of flour, cereals and cracker crumbs. Some even are made with vegetables like spinach. Do not be afraid to try interesting recipes. You will be surprised at how good some of these taste. If you really want to learn how to make dumplings, you will find hundreds of great recipes to try. 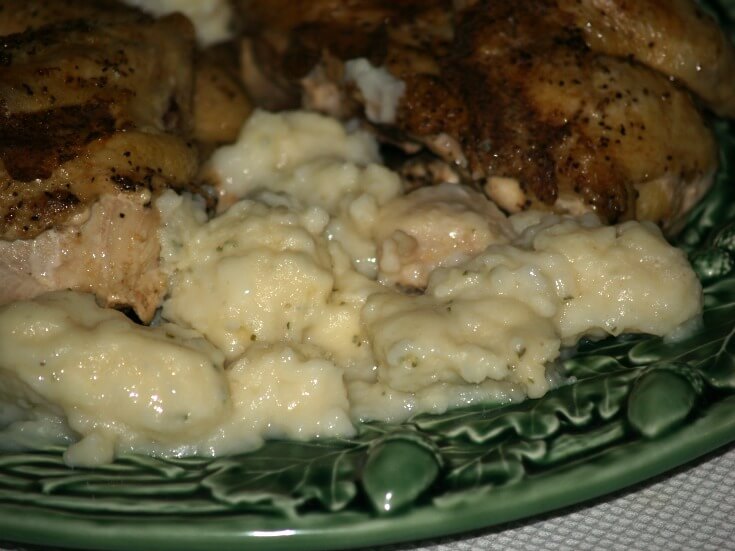 Learn how to make dumplings which are easy, light  and can be used with any type of entrée.

Cut in the solid shortening until crumbly; add eggs.

Stir in enough milk to drop batter from a spoon.

Bring to a boil a large pot of water or chicken broth.

Drop batter from a teaspoon into the boiling liquid.

Cook dumplings 2 to 3 minutes until done.

Remove from pot with a slotted spoon to a platter.

Learn how to make dumplings the old fashioned way.

Sift dry ingredients and mix together; cut in shortening and butter.

Add beaten egg and milk; work into a dough.

Place dough in a buttered mold, heat proof bowl or can.

Work dough up the sides of the mold leaving a hole in the center.

Place sweetened fruit in the hole of the dough.

Place mold in a pan with boiling water half way up the side of the mold.

Cover pan and steam (In simmering water) for 3 hours.

Beat until smooth and fluffy; top each serving of dumpling.

HOW TO MAKE DUMPLINGS IN A ROLLED STRIP

Cook about 10 minutes or until dumplings are firm.

Learn how to make dumplings a little firmer with no leavening; some of my favorites.

Combine and mix flour and salt in a large bowl; add eggs, butter and milk.

Blend together with hands until smooth; roll out to about ¼ inch thickness.

Cut into 1 to 2 inch squares; drop in boiling chicken broth and cook about 10 minutes.

Everyone loves to know how to make dumplings with fruit.

Measure flour and salt in mixing bowl; cut in ¾ cup of the butter until crumbly.

Knead dough until smooth; refrigerate for about 30 minutes.

Roll out dough and cut into 4 eight inch squares.

Cream ¼ cup butter with brown sugar and cinnamon until fluffy.

Use butter cinnamon mixture to fill center of pears; press 2 halves together and place 1 on each square of dough.

Brush edges of dough with water; bring 4 corners of dough together at the top of pears sealing well.

Roll out dough trimmings and cut into 8-12 leaves.

Beat yolk with 1 tablespoon water and brush over dumplings.

Dip leaves in yolk mixture and press in place on top of dumplings.

NOTE: What is farina? This is milled wheat which is often used as cereal. It is made from the germ of hard wheat and the inner parts of the kernel.

Combine egg with milk and butter; add to flour mixture stirring until smooth.

Bring water to a boil in a large pan with a little salt.

Drain dumplings and serve hot with stews, soups or chili.

When learning how to make dumplings, try this recipe. Try leaving out the chives and drop into gently boiling fruit like canned blackberries. This makes a great dessert!

In a medium bowl combine egg and milk; stir in biscuit mix and chives (If desired) until blended. 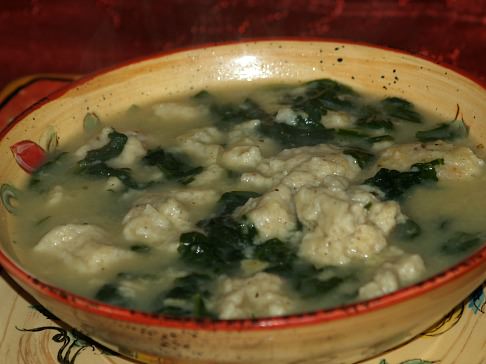 Learn how to make dumplings with great bacon flavor.

Sift 1 cup of the flour and baking powder into bowl; blend well.

NOTE: Add enough flour to mixture to make it firm enough to roll in flour (like a soft biscuit dough). When you drop a spoonful onto the flour, it will hold together. Sometimes I use 2 cups plus what I use to roll them in. Different types of bread crumbs will absorb different amounts of liquid.

Drop mixture with tablespoon onto a plate of flour; shape into balls rolling in flour to keep together.

Drop dumplings into boiling water WITHOUT OVERCROWDING; cook about 15 minutes.

NOTE: I keep boiling water ready to add if my pot gets low.

As dumplings cook spoon out onto a tray; continue cooking all dumplings and moving to the tray.

Keep about 5 cups of the liquid left in the pot; add chicken flavoring and bring to a boil.

Add spinach and cook about 3 minutes until wilted; return all dumplings to the pot.

NOTE: After chopping I line a bowl with paper towels and spoon the spinach on top to absorb extra moisture.

Dissolve chicken granules in milk and set aside.

Melt half of butter in skillet; add bread crumbs and fry until crispy.

Sift flour in a large bowl; add eggs, milk and seasonings and mix to a soft dough.

Cut logs into 1 inch lengths; cook in salted water about 10 minutes until they float on top.

Lift out dumplings with a slotted spoon, drain thoroughly and arrange in a warm serving dish.

Melt remaining half of butter and pour over dumplings; sprinkle with grated cheese.