How to Make Hard Cider

Learn how to make hard cider from beginning to end. Before starting the process of making hard cider let us look at just what it is. First, let me clarify that I am talking about hard cider which is made from apples. Hard cider can also be made with other fruits. Most are made basically made pretty much the same way but I want to specifically talk about apples. 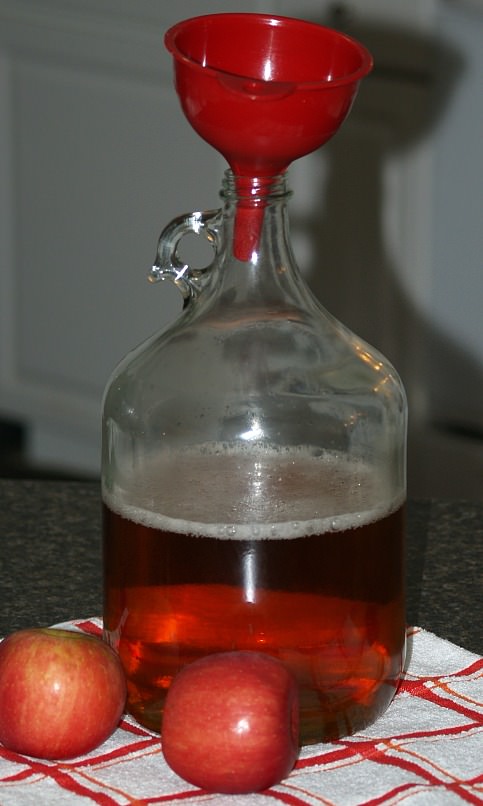 How to Make Hard Cider

I think I can say that most of us have all drank apple juice at some time in our life. Fresh apples are pressed or process in a juicer to get this succulent delicious juice. We can drink this juice immediately or we might can it. The heat used in canning stops the fermentation of the apple juice allowing us to enjoy it all through the year.

Before learning how to make hard cider, you should know just what hard cider is. The natural fermentation of apple cider causes the cider to become carbonated and alcoholic. Actually, hard cider is one of the most popular alcoholic drinks in the world. It has been a popular drink dated back to Roman times and was a very important beverage in our original thirteen colonies. As a kid, I remember barrels of apple cider being fermented at my uncle’s farm.

If you are learning how to make hard cider, you will want to start with fresh apple cider without any preservatives. It is best to make your own apple cider when the apples are ripe on the trees. This way, you will know that the cider is pure. If you do not want to make your own, it is possible to buy pure sweet cider with no additives from many apple orchards at harvest time.

If you are learning how to make hard cider and starting from scratch, you must get ripe apples and store them for a week to ten days to mellow and soften. This is called “sweating”. The apples will get sweeter and give the cider a better flavor. After this period of sweating, wash the apples thoroughly. Dry the apples and then grind them into a fine pulp. When this apple pulp is pressed, the apple liquid will gush out.

Small kitchen juicers work well when learning how to make hard cider in small quantities. They separate the pulp from the juice by centrifugal force. The larger appliances work like the traditional cider presses; chopping, shredding and grinding the apples and then squeezing out the juice. Apple presses are very expensive and are not worth purchasing unless you have your own apple orchard or have access to a large quantity of free or very cheap apples.

When learning how to make hard cider, the fresh squeezed cider is light at first but as soon as it hits the air it instantly oxidizes into its characteristic brown color; it is pulpy and thick. Unpasteurized cider can be refrigerated for about a week. If you want it to keep longer pasteurize it to stop the fermentation; heat it to 185F degrees. Froth will develop; skim off the top and pour into hot sterilized jars. Refrigerate it immediately; a gradual cool down to affect the flavor. You can also pour into plastic freezer containers and freeze for up to 6 months.

If you know how to make hard cider you know by allowing unpasteurized sweet cider to set longer at room temperature the process begins. Bubbles will start to form around the edges; alcohol is now forming and it will have a tangy taste. Let it set a while and you will get hard cider (or dry cider); leave longer and eventually it will turn to vinegar. This is a very simple way to make a little hard cider in your kitchen. Use airlock corks (available at wine supplies stores) for you bottle or jugs. Fill the jugs and let set at room temperature. In about 8 to 10 days it will start to foam over the top; clean off the bottle. This will not be a sweet cider any longer and the longer it stands the harder it will become.

If you know how to make hard cider, you probably know that traditionally it was made by pouring sweet cider into large oak barrels. They were stored in cold basements and left to set there to age. Sugar in the form of honey, raisins or molasses was added to increase the alcohol level. Modern commercial cider makers began to use some of the wine equipment to produce a more uniform quality of cider. They add sugar, honey, yeast, sulfur dioxide, tannic acid, calcium carbonate, pectin and carbon dioxide. For commercial fermentation, it generally takes five to six weeks. The cider is then bottled and left to age at least six months.

Hard apple cider varies tremendously depending on who and where they learned how to make hard cider. The alcohol content can be anywhere from 1.2 % to 12%. When producing commercially made hard apple cider, laws were established to regulate not only the alcohol content but the percentage of pure apple juice the cider contains. Although hard cider can be made from apples or pears, some countries only allow apples to be used and other countries demand a high percentage of apple juice.

How to Make Hard Cider Recipes

If you have learned how to make hard cider, you can use it in this recipe or substitute with sweet cider for a non alcoholic drink.

Heat until honey is dissolved and mixture is hot.

Pour into mugs and garnish with cinnamon stick and orange rinds stuck with whole cloves.

With blender, process berries with juice until smooth; strain and discard seeds.

Process cherries with juice until smooth.

When learning how to make hard apple cider, try this refreshing drink.

Combine water, red hot candies, sugar and cloves; bring to boil and stir until sugar melts and set aside.

Serve cold in glasses; garnish with pieces of sliced oranges.

Peel around the apples to make a thin coil of the peel; cut to make ten 6 inch long pieces.

Garnish with a piece of coiled apple peel.

Combine cider, grenadine, cloves and nutmeg in saucepan; heat until hot DO NOT BOIL.

Ladle into mugs; add 1 tablespoon rum to each.

Garnish each with cinnamon stick.