How to Make Lobster Bisque

As I learned how to make lobster bisque I would describe it as being a luxurious soup/stew. This is not something which was on our menu when I was growing up; it was far too expensive for us. Lobster has always been quite expensive when it comes to seafood; especially inland as Ohio is located.

The wonderful rich flavor of lobster in a creamy bisque is “luxurious” to say the least; maybe other words to describe would be elegant, heavenly or ambrosial. If you are from an area of the United States or another country where “lobstering”  is a regular everyday practice, you may have been able to learn how to make to lobster bisque much more so than I. It has only been in the last couple of decades that we could purchase frozen lobster to be able to make this recipe.

The old fashioned way to prepare a live lobster (Again, one didn’t usually have access to these in Ohio) for lobster bisque is to plunge it in hot boiling water which will kill it instantly. As it cooks it will absorb the seasoning in the liquid; if only salt in the water. Timing is usually about 25 minutes per pound; after cooking, the meat is removed from the shell and reserved for learning how to make lobster bisque or however you like to eat it.

Today the procedure to prepare lobster is to kill it just before cooking by inserting a knife between the eyes and divide the body shell and all into manageable pieces. Lobster pieces will cook in simmering water in about ten minutes. Simply drop the lobster pieces into simmering broth or white wine seasoned with herbs and diced vegetables like celery, parsley, thyme and others.

If you are learning how to make lobster bisque, the perfect recipes is made by blending some of the broth used to cook the lobster into the bisque; the meat, juices and shells add to the luscious flavor. After cooking, the meat is separated from the shells and reserved for adding back in the bisque. Usually butter, heavy cream and some kind of thickening will be cooked into the bisque. Before serving the mixture will be pushed through a sieve or strainer leaving a smooth satiny bisque. The lobster is blended back into the hot mixture before serving.

What is so special about bisque? What is the definition of bisque? This French term was used to describe this creamy smooth recipe which originally used bread crumbs to give the soup a velvety texture. Aside from this velvety smooth texture, what makes it so special is the rich flavorful taste. Unlike other creamed soups, lobster bisque is highly seasoned. If you are learning how to make lobster bisque, recipes today will usually tell you to use frozen or cooked lobster. They will use flour for a thickening agent rather than bread crumbs unlike the older more complicated recipes.

HOW TO MAKE LOBSTER BISQUE 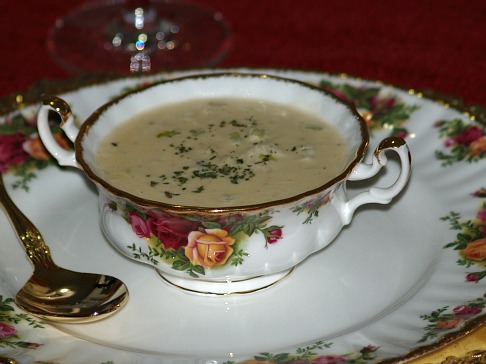 How to Make Lobster Bisque

The following recipe is for a more homemade type.

In a saucepan add the celery, potatoes, onion, salt, pepper, and paprika to the water. Cover and cook until the potatoes are tender. Blend mixture in food processor or blender until smooth. Return mixture to the pan and set on medium heat. In a bowl, gradually add the cream to the flour mixture, stirring until smooth and flour is blended. Add cream mixture to the vegetable mixture in the saucepan and stir to blend. Add the lobster and butter to the pan mixture. Stir until thick and hot. DO NOT BOIL.

Combine soups and cream; warm but do not boil.Add lobster and Tabasco and blend in.

Process in blender until lobster is smooth.

Place back on heat and bring to steaming and serve.