How to Make Nougat Candy Recipes

I always wanted to learn how to make nougat candy recipes since I was a kid. Occasionally I would be allowed to have a piece of chewy white candy with colorful pieces of fruit in it.  I never knew what it was called. All I knew was that it was so good and one piece was certainly not enough. For many years, the delicious taste of this candy returned to my mind. With so many other wonderful recipes on my mind to try (Especially desserts and sweets) I never researched how to make nougat candy recipes. 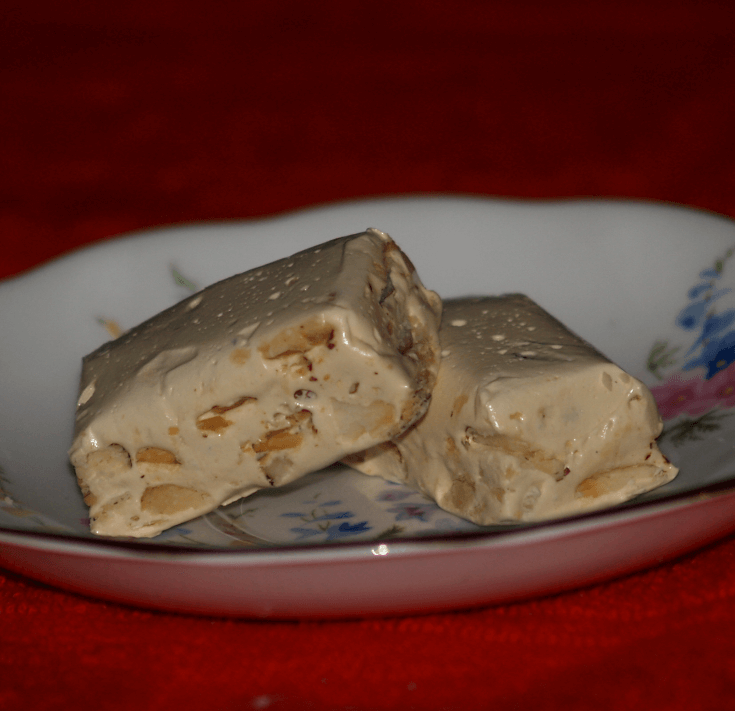 How to Make Nougat Candy Recipes

Finally, one day I ran across a candy recipe and I knew this had to be the one. I also found other “nougat” recipes which seemed to be different so I began to investigate more. I found that many countries like France, Spain, Italy and countries of the Middle East and Asia claim the fame for nougat candy. Perhaps this is the reason the different recipes can vary so greatly. The one common denominator in all the recipes is the “chewy” texture. This “chewiness” can range from a brittle to a light and airy chewiness.

As I was trying to learn how to make nougat candy recipes, I found the most common is the white kind. This is what I had as a kid. This one includes the sugar or honey and beaten egg whites. I found it to have been very popular in Italy and other parts of Europe for hundreds of years. A chocolate and praline nougat is made in Germany and a firmer French version, a brown nougat is made without egg whites. Many of the firmer types are more like I call “brittles”; usually nuts other than peanuts.

When I learned how to make nougat candy recipes I found the one main ingredient is sugar. As I mentioned above, many recipes also include beaten egg whites. Although nougats and marshmallow are both made with egg whites, the nougats have a firmer texture. This firmness is due to the gentle cooking after the egg whites are mixed with the syrup.  Occasionally you will have recipes which instruct you to weight down the candy. This is done after pouring the mixture into the pan and also lends to the firmness. Of course, the different ingredients added will also make the different textures and flavors. Other ingredients which I found in nougat recipes are chocolate as throughout the German region, corn syrup, caramel, fruit and all kinds of different nuts.

When you learn how to make nougat candy recipes you will find they can be without coating, coated with nuts and coated with chocolate. The pieces I had as a kid were without coating. I also really like all of the different types, uncoated or coated with chocolate and nuts. Some recipes from Europe are flavored with flowers such as orange blossoms, lavender or rose. These flavors are not common here in the United States so it is harder to get these ingredients for making. Nougat candies are usually cut in small pieces but are also used in the larger candy bar size.

As I learned how to make nougat candy recipes, I found edible rice paper to be a common ingredient used. You will probably have to buy it online or at an Asian market if you have one available. I find it is to hard to get so I make due without it. Also note that many recipes contain honey. Different types of honey will add a little different taste. Various types of flower honey, like orange blossom contributes to a little unique flavor. It is good to remember that cooking changes the honey flavor so add it at the end of cooking. As I said, the flavor and texture varies greatly from one recipe to another. I recommend that you try all of the different ones.

NOTE: Instead of using rice paper, I usually line my pan with heavy duty foil and butter it. When I turn it out to be cut I dust my cutting board first with tapioca starch, corn starch or powdered sugar, I also dust the top of the candy with one of the same.

HOW TO MAKE NOUGAT CANDY RECIPES that is NUTTY 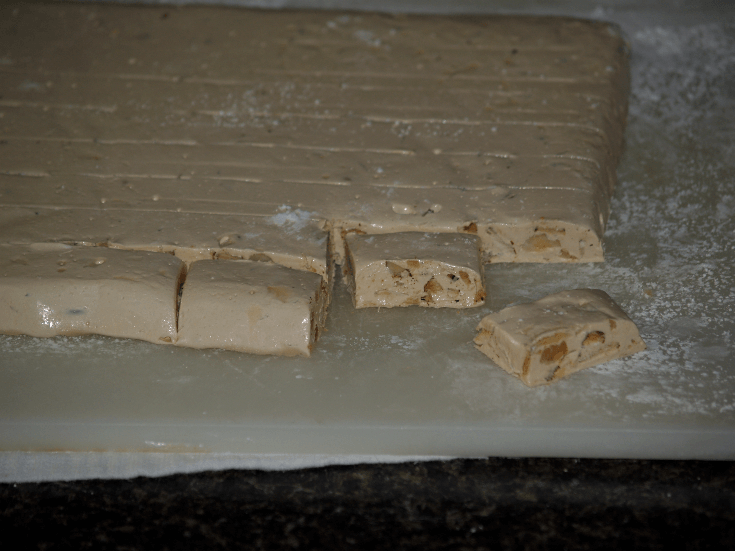 Learn how to make nougat candy recipes with almonds. This is delicious candy with a light chewy texture. It is good if you have a helper for the beating and pouring.

Spread the Brazil nuts and almonds on cookie sheet; toast for 10 minutes or until golden brown.

NOTE: To have the exact size pan, I shape it with two layers of heavy duty foil. 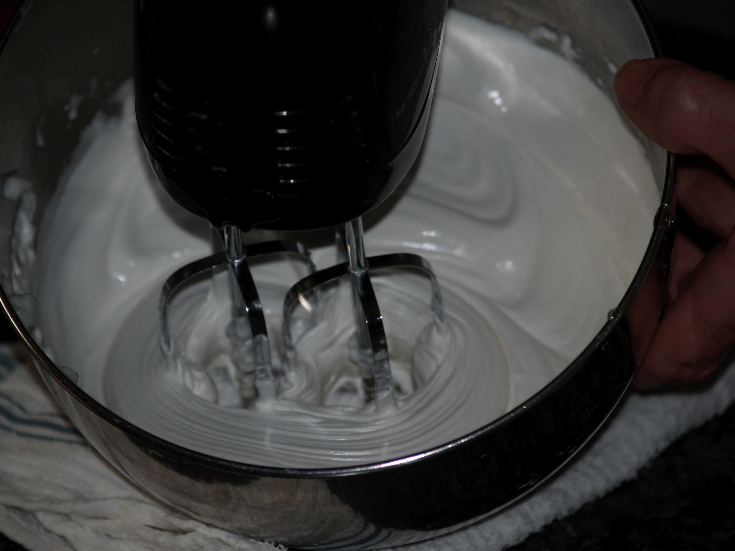 Pour about ¼ of hot mixture in a thin stream into egg whites while beating on high speed.

Continue constant beating for 5 minutes or until mixture is stiff enough to stand in stiff peaks.

NOTE: When a little dropped in cold water threads will form.

Add vanilla and butter beating until thickened again about 5 minutes.

Smooth top with a spatula; refrigerate until set about 1 hour.

NOTE: If the candy is too firm it is harder to cut.

Loosen around the edge of candy; turn out on cutting board in a large block.

With a sharp knife, cut into 1 ½ X 1 inch pieces; wrap each piece in wax paper. 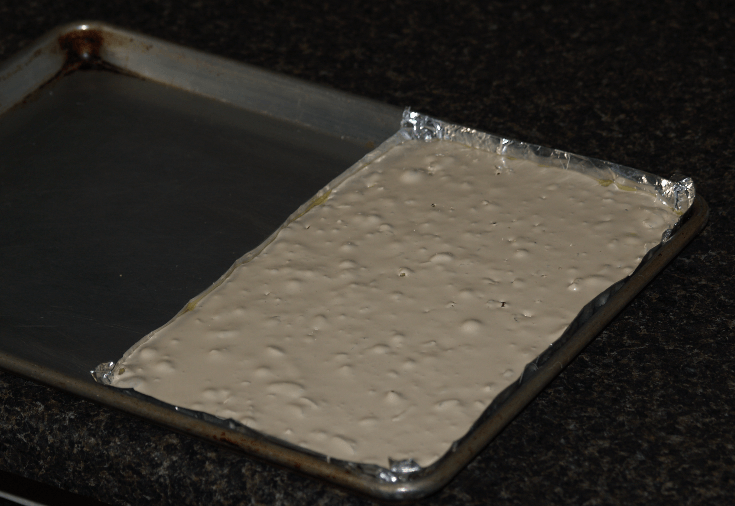 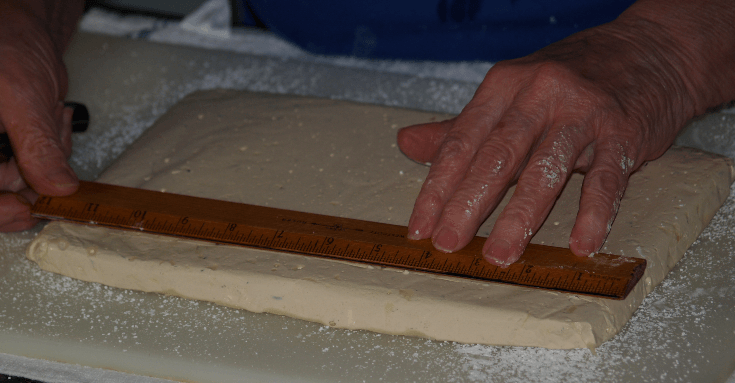 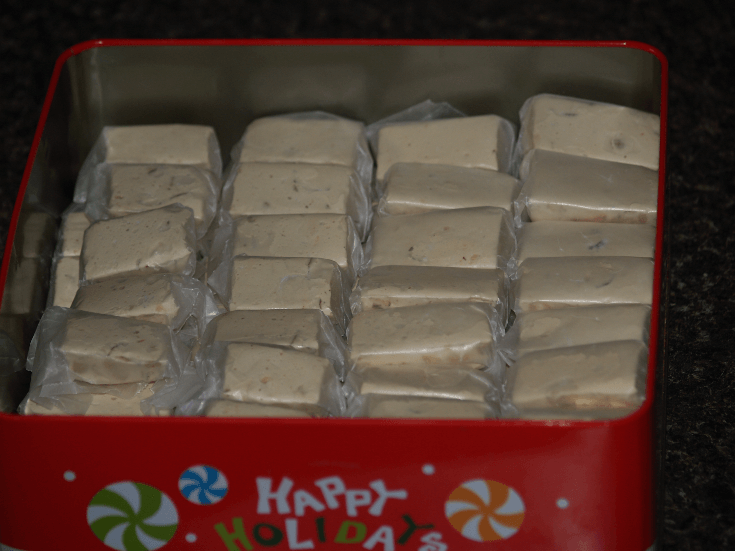 Wrapped and Stored in Candy Box 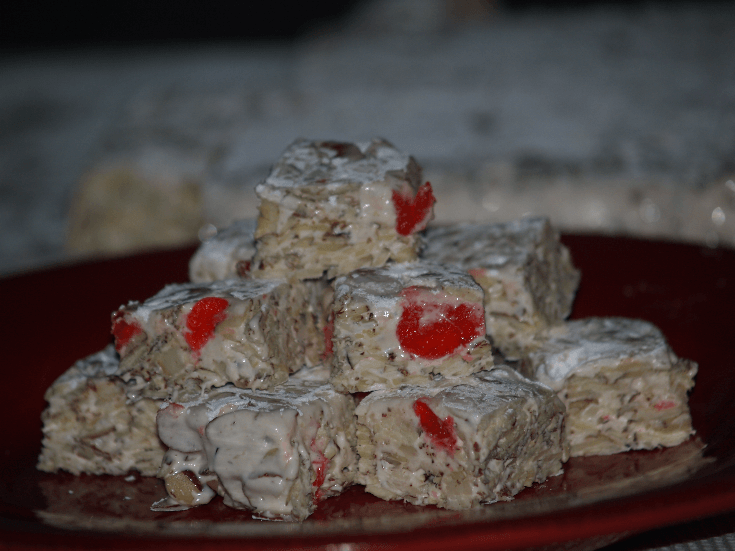 Learn how to make nougat candy recipes like I did.

Place honey and corn syrup in top of double boiler; cook and stir until heated.

Pour egg white mixture into top of double boiler with the honey mixture.

NOTE: Have double boiler over boiling water but not touching the water.

Heat and stir mixture until it becomes hot and thick (15 to 20 minutes); stir in remaining ingredients.

Cover top with rice paper; place a board on top and a heavy weight on top of board.

NOTE: I place buttered foil on top of the candy and weighted it down.

Let candy set until cold; cut into bars with a sharp knife using a “sawing” motion.

Wrap each piece with wax paper. 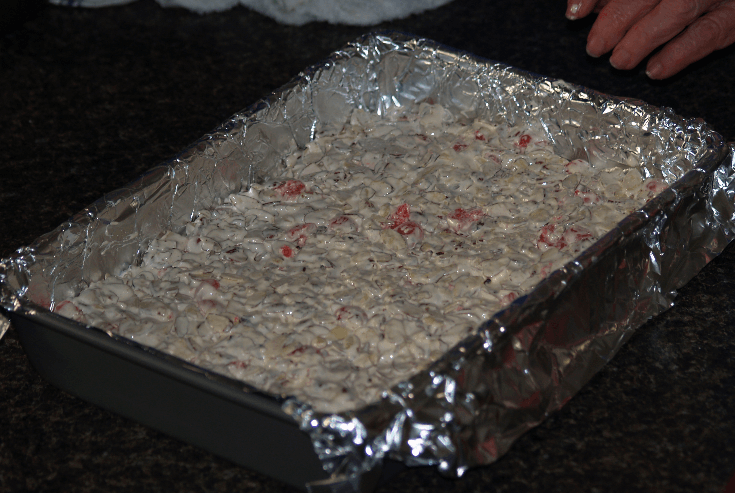 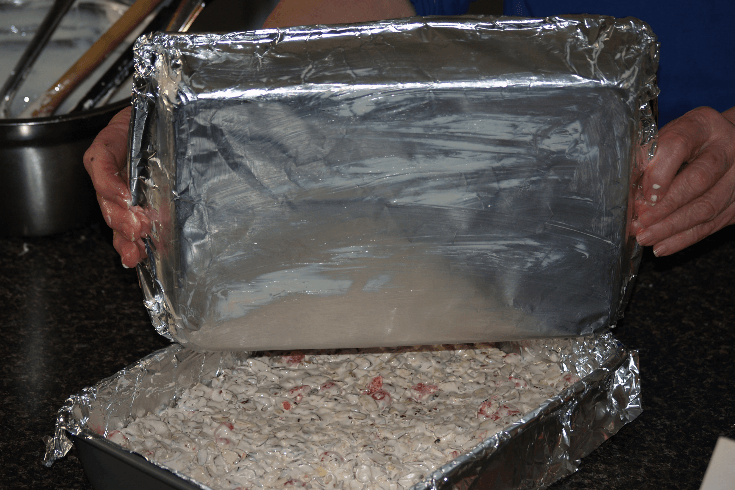 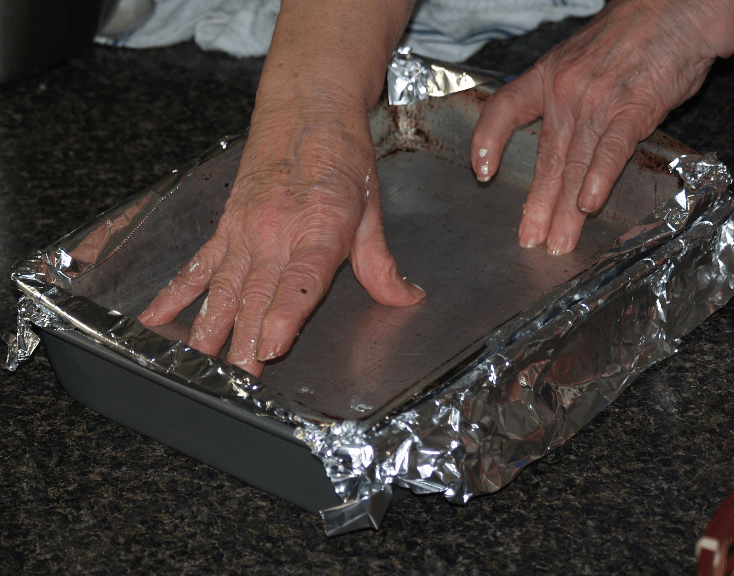 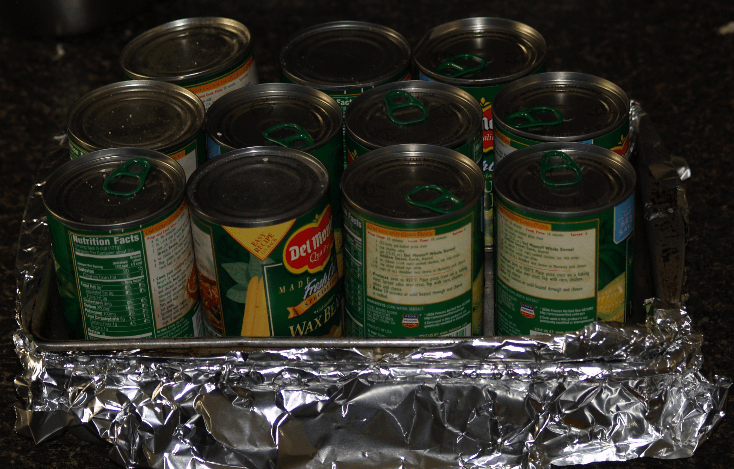 Weight Down with Cans 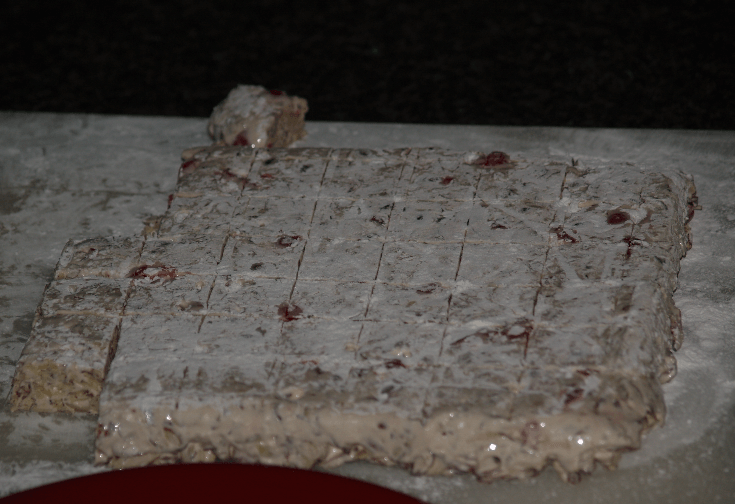 Turn Out on Powdered Sugar Board

NOTE: Nougat wafers are thin waffle cookies; can be purchased to line the pan for nougats.

Combine sugar, water and 1 ½ tablespoons of the corn syrup in a heavy saucepan.

Cook and stir over medium low heat until sugar is dissolved.

Cook mixture until it returns to 290F degrees.

DURING LAST FEW MINUTES OF COOKING beat egg whites until stiff in a large metal bowl.

Add the hot syrup gradually to the beaten egg whites while continuing to beat; stir in nuts.

Place bowl over pan of hot water over heat; cook and stir until mixture dries and thickens.

NOTE: In place of wafers you can use rice paper; top with rice paper and then weight it down.

Learn how to make nougat candy recipes made with lavender.

Make lavender sugar 3 DAYS AHEAD OF TIME to blend flavor.

Blend ¼ cup of sugar with lavender flowers in a food processor.

Combine 6 tablespoons of the lavender sugar with 1 tablespoon of water and 1/3 cup of the corn syrup in heavy 2 quart saucepan.

Stir over low heat until mixture comes to a boil; cover and cook 3 minutes.

Remove pan from heat; let sit while doing next step.

Beat 5 minutes until mixture is THICK and CREAMY like marshmallow cream; set aside.

Cook over low heat until mixture comes to a boil; cover and continue to cook for 3 minutes.

Remove from heat; pour this mixture into the thick and creamy mixture blending well.

NOTE: The mixture will be glossy, thick and sticky.

Stir in blanched almonds and butter; pour into prepared pan and set in cool place 12 hours.

Remove candy from pan; cut into 1 inch squares and wrap in wax paper.

Learn how to make honey nougats dipped in chocolate.

Combine honey, corn syrup and cream in a heavy saucepan.

Bring mixture to a slow boil; cook to a firm ball stage.

Stir in 1 ¼ pounds slivered almonds; pour into a pan lined with rice paper.

Top each piece with almond half.

Learn how to make nougat candy recipes with chocolate.

Melt chocolate in top of double boiler over hot water (Not boiling).

Bring mixture to a boil over medium low heat without stirring.

Remove pan from heat and cool for 15 to 20 minutes until just warm to touch.

Cover mixture with wax paper and a thick towel; let stand about 30 minutes.

Dump mixture out onto a board and knead until soft and smooth.

NOTE: If not thick enough to knead stir well with a wooden spoon.

Return the mixture to a clean saucepan over boiling water.

Stir constantly until mixture is soft enough to pour.

Remove the pan from the heat and stir in the nuts; pour into prepared pan.

Lightly brush another piece of rice paper with cold water; place on top of nougat.

Learn how to make nougat candy recipes like the French.

Bring mixture to a boil over low heat stirring constantly.

Cook until mixture turns pale golden brown and the almonds crackle under a spatula.

Unmold candy and break into pieces.