How to Make Pear Pies

Not too many people know how to make pear pies even though they are grown in many parts of the world. Actually, I have found that pie making in general has become almost a lost art. We had many fruit trees growing around us in Ohio; peaches and lots of apples. Occasionally some would try growing pear trees but it seems to get a little too cold for pears. Pears were more commonly grown farther south, so we did not get as many pears as apples. 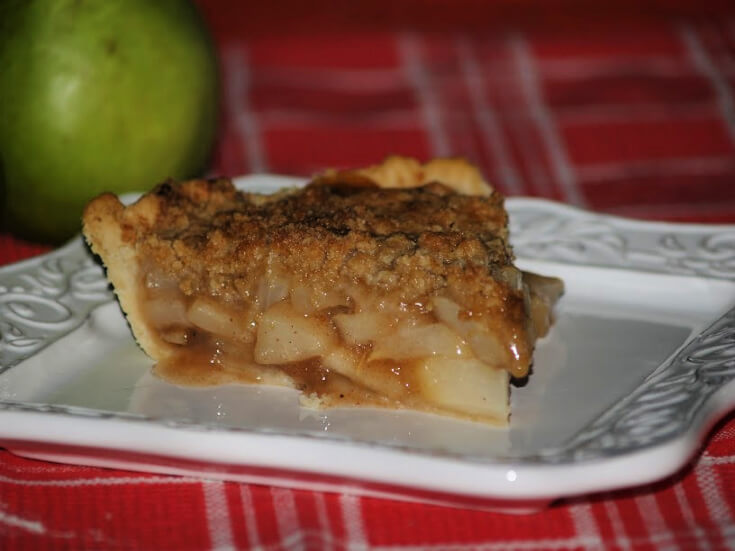 How to Make Pear Pies 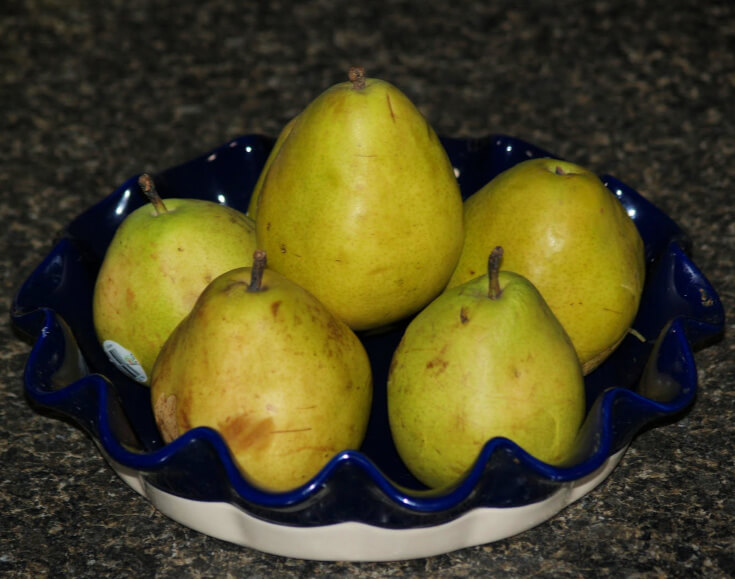 When Mom could buy pears during harvest we really enjoyed them. Of course, anytime Mom could get fresh fruit, she made a pie. When you learn how to make pear pies, you will find they have a very mild smooth flavor.  Due to this taste of pears many other ingredients blend in quite well. When adding ingredients like spices the flavor of each pear pie can be varied.

When you learn how to make pear pies, you will know the pie crust plays an important part of each pear pie recipe. These crusts can be made with graham crackers, gingersnaps, cookie dough and most commonly delicious flaky pie dough. Each of the pie crust recipes will make your pie unique. You will also find many pie recipes include other fruits mixed in with the pears which I have found all to be delicious.

Like most other fruit pies, pear pies can be made simply with fruit or with custards, creams and meringue. For me, this is a simple matter of my taste buds at the time of making. All of these are so delicious. You may have a favorite choice of pears to make your pies but I have never had one pear pie turn out less tasteful than another. I usually purchase what is available from my “limited” selection. Some of the names you can look for in pears are the red or green ANJOU, red or green BARTLETT or BOSC.  If I had to choose one I would say it would be the Bosc pears. 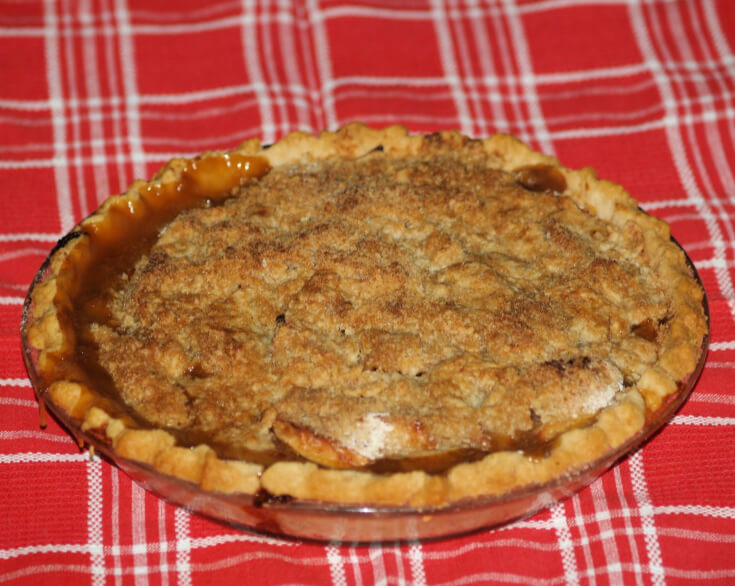 Learn how to make pear pies with a crumb topping.
Crust

Preheat oven to 400F degrees.
FOR CRUST combine flour and salt; cut in shortening until crumbly.
Sprinkle water on top tossing until moist enough to shape into a ball.
Roll pastry out on a floured surface to fit a 9 inch pie pan.
Fit into pan, trim and crimp around the edges.
FOR FILLING combine all the filling ingredients; spoon into crust.
Bake pie for 25 minutes.
FOR TOPPING combine the flour and brown sugar; cut in butter until crumbly.
Sprinkle topping over the filling; bake for 30 - 35 minutes longer.
Serves 6 to 8. 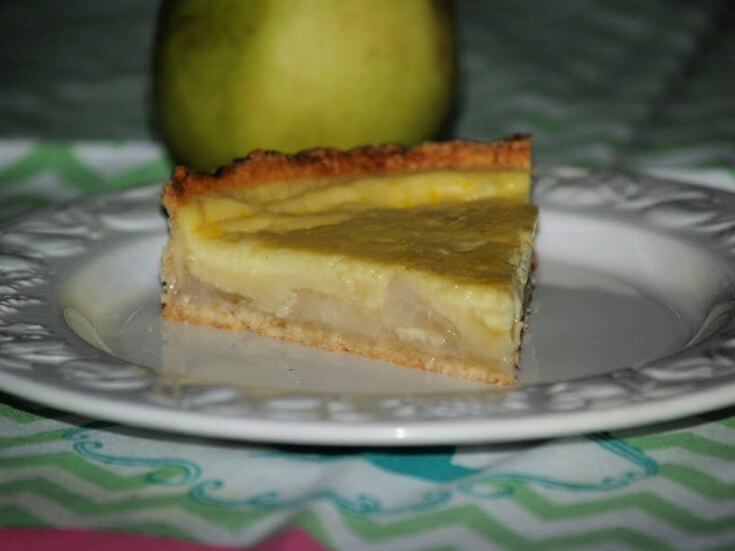 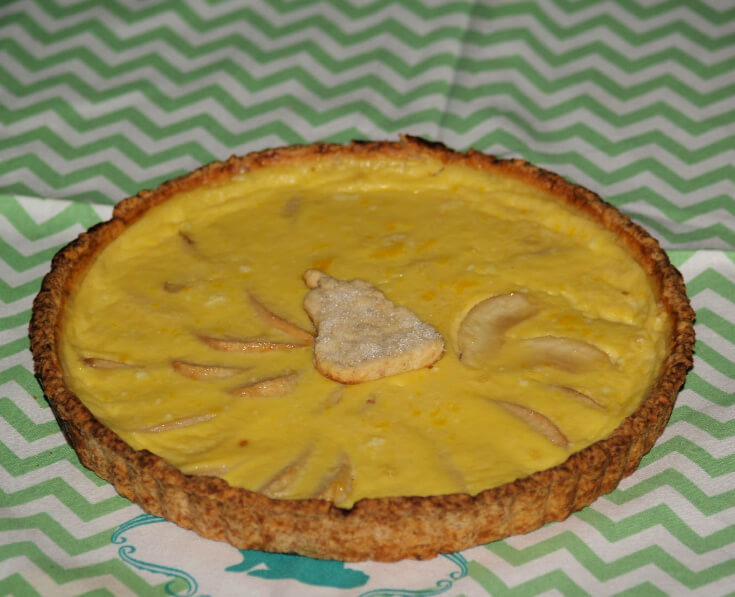 Learn how to make pear pies in tart pans.
Crust

Preheat oven to 425F degrees.
FOR CRUST combine flour, nuts and sugar in medium bowl
Cut in butter until coarse crumbs.
In small bowl blend egg yolk with the water; sprinkle over flour mixture.
Toss with a fork until dough forms; shape into a flattened disk.
Roll dough out to a circle (11 Inches) on floured surface.
Line a tart pan (9 inches) with dough pressing to fit; trim even with edges.

NOTE: If the crust falls apart while preparing the pan simply press it in the pan with your fingers.

FOR FILLING arrange pear slices in lined pan with cut sides down in circle.
Sprinkle the pears with sugar; bake 15 to 18 minutes.
NOTE: Pears should be slightly browned and crust golden.
Remove tart from oven; REDUCE OVEN TEMPERATURE TO 375F degrees.
FOR TOP LAYER combine in small bowl the flour, sugar and remaining ingredients.
Whisk together until blended; pour over partially baked pears.
Return to oven and bake 30 to 35 minutes until center is set.
Cool in pan on wire rack; serve warm or chilled.
Serves 6 to 8.

Learn how to make pear pies with a walnut crust.
Crust

Sift flour into a large bowl; cut in butter until crumbly.
Stir in the sugar, walnuts and egg; stir in enough water to bind dough.
Shape into a disk, wrap and refrigerate 1 hour.
PREHEAT OVEN to 375F degrees.
Roll out TWO THIRDS of the dough; line an 8 inch quiche pan.
FOR FILLING peel, core and cut pears in quarters; arrange over crust.
NOTE: Place pears in a circle with the core side down pointing toward the center.
Sprinkle pears with 2 TABLESPOONS of the sugar.
Roll out REMAINING dough; place over the pears pinching to seal edges.
NOTE: With a 3 inch cookie cutter, cut out center of pie crust.
Brush top of pie with egg white; sprinkle with 1 TABLESPOON of sugar
Bake 15 minutes; REDUCE HEAT to 350F degrees and bake 25 minutes longer.
Cool pie completely in pan.
Beat the whipping cream until stiff; pipe into center of pie to serve.
Serves 6 to 8.

Learn how to make pear pies with gingerbread crust.
Crust

FOR CRUST preheat oven to 375F degrees.
Place crumbs in food processor; process until very fine.
Combine and mix the crumbs, sugar and melted butter.
Press mixture into bottom and on sides of pie plate.
Bake 8 minutes; cool on rack.
FOR FILLING combine in saucepan gelatin, sugar and salt.
Stir in the ginger, cinnamon and the beaten egg yolks.
Stir in pear slices; stir and cook 3 minutes.
Remove from the heat and cool; chill for 1 hour.
FOR TOPPING beat egg whites and cream of tartar until stiff peaks form.
Fold egg whites into the pear mixture; pour into the crust.
Spread whipped cream over the filling; garnish with cinnamon, ginger and nutmeg.

FOR CRUST Preheat oven to 400F degrees.
Sift flour and salt in mixing bowl; cut in shortening until crumbly.
Shape into a ball; roll out and fit into 9 inch pie pan and set aside.
FOR FILLING combine pears and lemon juice in large bowl.
In another bowl combine tapioca, cinnamon, salt and nutmeg.
Add spice mixture to the pears; toss gently and let stand 15 minutes.
In another bowl combine oats, flour and sugar; cut in cold butter.
Spoon pears into pastry shell; spoon oat mixture evenly over the top.
Bake for 45 minutes.
Melt caramels in a saucepan over low heat stirring until smooth.
Add the pecans to caramel mixture; drizzle over top of the pie.
Bake 8 to 10 minutes longer or until golden brown.
Cool on wire rack; serves 6 to 8.

Learn how to make pear pies with cranberries.

In a large bowl combine and mix flour sugar and salt.
Cut in butter and shortening until crumbly.
Add ice water by tablespoonfuls tossing until all is moistened.
Gently knead on lightly floured surface until combined; divide in half.
Cover each half with plastic wrap and refrigerate for 30 minutes.
FOR FILLING pour boiling water over cranberries; cover and set 30 minutes.
Drain liquid off cranberries; combine cranberries and pears.
Add to fruits the sugar, lemon juice, flour and cinnamon; toss to mix.
PREHEAT OVEN to 375F degrees.
Line bottom of jelly roll pan (10X15 inches) with parchment paper; set aside.
TO PREPARE roll half of the dough on lightly floured surface to 16X11 inch rectangle.
Fit dough into prepared pan pressing in bottom and up the sides.
Spread fruit mixture evenly over the dough; dot with the butter.
Roll remaining half of dough to a 15X10 inch rectangle; cut lengthwise into 10 strips.
Place 6 strips lengthwise over the fruit mixture; place 4 strips evenly across the fruit.
Trim off excess dough; press edges of strips into the edges of the bottom dough.
Brush the strips with milk and sprinkle with sugar.
Bake about 40 minutes until crust is golden and pears are tender.
Cool pie on rack completely; dust with powdered sugar lightly.
Serves 12.

Learn how to make pear pies with the great combination of chocolate and hazelnut.
Crust

FOR CRUST combine flour, hazelnuts, brown sugar and salt.
Cut butter in until crumbly; gradually add water tossing with a fork to moisten.
Shape dough into a disk; wrap in plastic wrap and refrigerate 30 minutes.
PREHEAT OVEN TO 400F degrees.
Roll dough in circle on lightly floured surface to 1/8 inch thickness.
Press dough into a 9 inch tart pan and trim edges; prick bottom with a fork.
NOTE: Place in the refrigerator while preparing the filling.
FOR FILLING with clean beaters beat the egg whites until stiff peaks form; set aside.
Working quickly cream butter and brown sugar in a large mixing bowl until smooth.
Beat in the egg YOLKS and amaretto; beat in hazelnuts and cocoa powder.
Fold in a third of the beaten whites; fold in remaining whites.
Spread filling onto bottom of pastry shell; arrange pears on top.
Bake on LOWER RACK for 30 to 35 minutes until crust is golden brown.
Brush pears with warmed honey; cool on wire rack.
Dust lightly with powdered sugar before serving; serves 12.

HOW to MAKE PEAR PIES with MERINGUE

Learn how to make pear pies with meringue.
Crust

Preheat oven to 350F degrees.
FOR CRUST sift flour and salt in mixing bowl; cut in shortening until crumbly.
Slowly add enough water to make a dough ball; roll out to fit 8 inch pie pan.
Fit dough into pan; trim edges and crimp edges.
FOR FILLING slice pears and arrange in pie shell.
In mixing bowl beat egg yolks with sugar; beat in flour and salt.
Beat in the sour cream, vanilla, lemon peel and juice until well blended.
Spread evenly over the pears; bake for 50 to 55 minutes.
FOR MERINGUE beat egg whites and cream of tartar until frothy.
Gradually add sugar beating on high speed until stiff peaks form.
Spread over top of hot filling to the edges to seal crust.
Bake about 12 to 15 minutes until golden brown; cool completely.
Serves 8.

Learn how to make pear pies for barbeques.

Stir together flour, lemon peel and ginger in a large bowl.
Add pear slices tossing to coat; set aside.
Fit 1 piecrust into the bottom of a 9 inch deep dish pie pan.
Arrange pear mixture in the pie crust.
Combine the sugar, pecans and butter mixing well.
Spoon evenly over the pear mixture; top with remaining pie crust.
Fold edges of the crust under and crimp the edges; cut slits in top.
Light one side of the grill; PLACE THE PIE ON THE OTHER SIDE.
Cover with grill lid; cook over medium heat (300F to 350F degrees for 90 minutes.
NOTE: Can also bake in oven for 45 minutes at 350F degrees.