How to Make Pickles

How to make pickles depends on what kind of pickles you want to make. There is a big difference in pickle recipes from soft sweet bread butter pickles to crispy dill pickle recipes. Pickles do not even have to be made with cucumber like many think. Pickles are often made with fruits and other vegetables; even from some rinds.

The word “pickle” comes from a Dutch word meaning brine which is why the popularity of pickles is attributed to the Pennsylvania Dutch. Every Pennsylvania Dutch cookbook contains dozens of recipes for all types of pickles; every meal served by them is suppose to contain seven sweets and seven sours.

NOTE: For added crispiness to pickles, add 1 or 2 clean grape leaves to each quart of pickles OR 1 ½ sticks of horseradish and can as usual.

When learning how to make pickles, we generally think anything cured with vinegar is pickled; however pickles can be made without vinegar. The old fashioned BRINED PICKLES are cured with a brine made from salt.

The salt encourages fermentation or the growth of friendly bacteria naturally found on food as it does when making sauerkraut. Cucumbers are typically placed in a crock or wooden barrel with the salt brine and a variety of spices like garlic and dill. These pickles without vinegar are usually kept in the refrigerator and do not last as long as ones preserved with vinegar.

How to make pickles that are quick process or FRESH PACK. This type of pickles is the easiest to prepare. They are soaked in a low salt brine for several hours, then drained and processed in boiling hot vinegar solution seasoned with spices. They are packed and processed immediately to store. 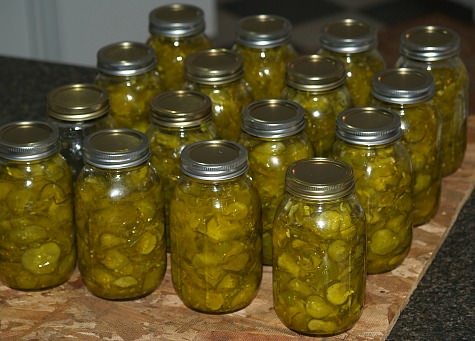 How to Make Pickles

A favorite family recipe when you learn how to make pickles.

Bring mixture to a boil, reduce heat and simmer 20 minutes.

When canning foods and when learning how to make pickles, many people traditionally make FRUIT PICKLES. These are prepared with a wide variety of fruits and made into pear pickles, peach pickles and watermelon rind pickles. They are simmered in sweet sour or spicy vinegar syrup and then packed and processed.

Peel rind and all pink from edges of watermelon; cut into 1 inch squares.

Mix salt with 3 quarts of water to make brine; pour over melon squares.

Drain and rinse with cold water.

Cover with fresh cold water and cook about 10 minutes or until tender (do not overcook); drain.

Tie spices in cheesecloth and add to vinegar mixture; boil 5 minutes and pour over watermelon with spices and sliced lemon.

Heat watermelon in syrup until boiling and cook about 10 minutes; remove spice bag.

To each jar add 1 piece of cinnamon from the spice bag; cover with boiling syrup to within ½ inch of top.

Run knife around inside of jar to remove air bubbles, wipe rim of jars clean and adjust lids and rims on jars.

Process in boiling bath for 5 minutes from time jars are placed in boiling water.

Wash and peel peaches; drop into a solution of ½ teaspoon ascorbic acid and 2 quarts water.

Place vinegar in saucepan; add sugar and stir until dissolved.

Cook over medium heat; boil 5 minutes and skim off foam.

Tie spices in cheesecloth and add to pickling solution.

Cook until peaches can be pierced with a fork but are not soft.

Remove from heat, cover and allow peaches to set in syrup overnight in refrigerate to plump up.

Bring peaches to a boil.

If learning how to make pickles, RELISH RECIPES are also a form of pickles. They are made with chopped fruits and vegetables, then cooked with seasonings and vinegar; usually hot and spicy or sweet and sour. After cooking they are packed and processed. Some of these are Piccadilly, chow chow and chutneys.

PEAR RELISH RECIPE When learning how to make pickles many considered anything that is pickled (or made with vinegar) to be pickles such as relish recipes.

Bring mixture to a boil and cook for 30 minutes; pack in hot sterilized jars and seal immediately.

Learn how to make pickles with crab apples. You will love these.

Combine all ingredients EXCEPT APPLES in a large pot; bring to a boil and cool.

Add the apples and heat again to boiling; boil apples until almost tender.

Turn off the heat and let the apples stand in the syrup overnight.

In the AM, pack the apples in clean hot sterilized jars; bring syrup to a boil.

Pour hot syrup over the apples leaving 1 inch space at the top of jars.

Wipe the rim of the jars and place hot lids tightly on jars; place jars in hot water bath for 20 minutes.

Recheck lids making sure they are snug; let stand at room temperature to cool.