How to Make Pork Chop Dinners

Learning how to make pork chop dinners has been a goal for most cooks for decades. Throughout Europe and America pigs were grown from spring time to the fall of the year.  Traditionally, as my family did, fall was the time for butchering and preserving.  Pork chops are delicious when prepared fresh. We also enjoyed pork chops all through the cold winter months by smoking some and freezing some. During this butchering time we always looked forward to and planned for great pork chop dinners. 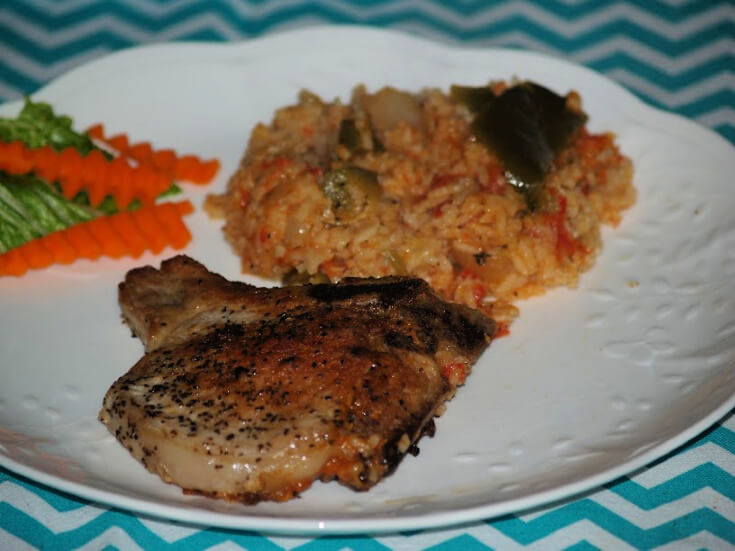 How to Make Pork Chop Dinners

Not only is pork a popular meat in Europe and America, it is a primary protein source in Central and South America and throughout Asia. Besides the good taste and the versatility of cooking, it has always been pretty economical compared to other meats. Even today it is cheaper than beef or seafood for those of us not living in the areas where seafood is more abundant.

When learning how to make pork chop dinners you will want to know the different types of chops which are available. Although I use all pork chops interchangeably they will be sold under different names. I mainly buy the center loin chops (Also called top loin chops, porterhouse chops, pork loin end chops) which are very good and usually the most available to me. Shoulder chops might also be called blade chops or blade and pork loin chops. My least favorite is the rib chops which are cut from the lower loin having less flavor and more dry and tough. All these different cuts vary a little in the amount of fat and gristle. To me a little fat adds tenderness and flavor but I do not want any gristle.

When I learned how to make pork chop dinners, more important to me was how the chops were cut and not from where they came. I usually prefer the bone in the chops because I like the flavor better when cooked on the bone. The “boneless” chops are good when you want a filet. If I want to stuff my chops for a dinner, I like the chops cut one to two inches thick. For regular dinners I like the chops about three fourth to one inch thickness. Last, you will often find the thin chops for sale in the supermarkets. These are good for “quick cooking” but can easily be over cooked. Also for the thinner chops, most adults will want at least two per serving at a dinner. 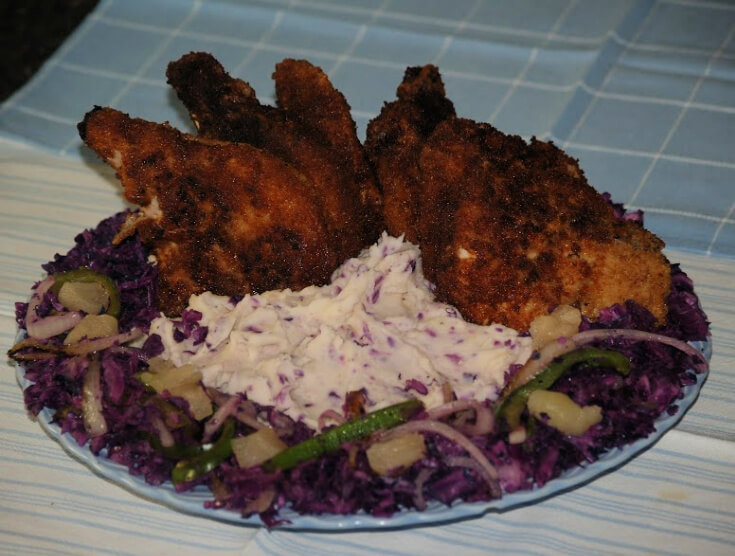 Learn how to make pork chop dinners, German style.  The potatoes, cabbage and even the chops can be prepared ahead and stored in refrigerator. TO SERVE THIS RECIPE spoon hot cabbage mixture around hot mashed potatoes. Arrange the cooked pork chops on plate with potatoes and cabbage.

FOR CABBAGE mix cabbage, vinegar, salt and pepper in bowl.

Heat oil in a large skillet over medium heat.

Add onion and green pepper; sauté for 3 minutes; move to a plate.

Add the cabbage to the hot skillet; stir over medium for 8 to 10 minutes.

NOTE: Cabbage should be tender crisp.

REMOVE ½ CUP of the cabbage for the MASHED POTATOES; DRAIN and set aside.

Add onions and peppers back into the skillet of cabbage.

Season mixture with salt and pepper; set aside.

FOR POTATOES cover potatoes in a large saucepan with water.

Add about 1 ½ teaspoon salt; bring to a boil.

Cover pan and cook until tender; peel and chop into bowl.

NOTE: Leave enough space around the edges to spoon on the red cabbage.

NOTE: At this point you can cover and refrigerate up to 8 hours. To reheat place in preheated oven at 350F degrees for 30 minutes.

FOR CHOPS season with salt and pepper; dredge in flour.

Mix eggs and milk together; dip floured chops in egg/milk.

Heat oil and butter in a large skillet over medium heat.

Place chops in skillet until browned about 5 minutes.

Turn chops over and cook about 5 to 7 minutes until chops are tender. 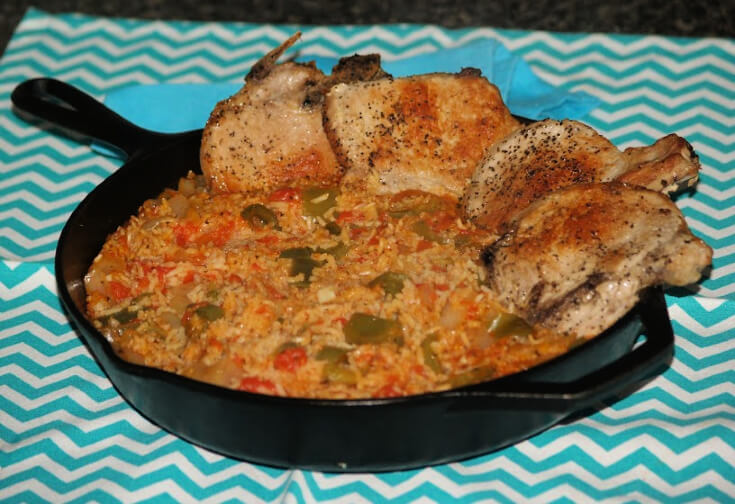 Learn how to make pork chop dinners with rice on stove top.

Season chops on both sides with salt, pepper and poultry seasoning.

Heat oil in a large Dutch oven; brown pork chops on both sides.

Remove chops to a platter; add onion and green pepper to Dutch oven.

Sauté  for 3-4 minutes while tossing vegetables.

Stir in the rice, tomatoes, salt, sugar and mustard; place chops on top.

Bring mixture to a simmer, cover and simmer on LOW about 45 minutes.

NOTE: Chops should be tender and rice soft.

Learn how to make pork chop dinners served traditionally with apples. Because pork and apples were fall products, they were often served together.

FOR CORNBREAD prepare cornbread according to directions.

FOR CHOPS heat oil and butter in large skillet on medium high.

Season chops with salt and pepper.

Quickly brown chops on both sides in hot skillet.

Remove chops to plate and keep warm; set aside.

NOTE: Save drippings in skillet for dressing.

TO MAKE DRESSING crumble cornbread into a large bowl; set aside.

Sauté celery and onion in skillet until tender.

Add the soup, broth, sage, pepper and celery salt to the skillet.

Pour mixture over the crumbled cornbread; stir to moisten.

Stir in the chopped egg; set aside.

Spoon dressing mixture into prepared casserole dish to within 2 inches of end.

NOTE: Keep about 2 inches at end clear to put in apples.

TO PREPARE APPLES combine apples and pears in a bowl.

Combine honey, water and cinnamon; pour over the apples.

Dot apples and dressing with the butter.

Place browned pork chops on top of the dressing.

Cover casserole with foil; bake about 30 minutes until chops are done.

Learn how to make pork chop dinners with cornmeal dumplings.

Bring to a simmer; cook over LOW heat for 30 minutes.

Strip turnip leaves of the stems running down centers.

Peel and slice the roots; add leaves to the meat.

Remove 2/3 CUP of the liquid for the dumplings.

Add butter to the greens and meat.

TO MAKE DUMPLINGS combine and mix all the ingredients.

By a teaspoon roll 1 inch balls with your hands; place on tray.

NOTE: Make sure each dumpling is completely covered with liquid: DO NOT STIR.

Boil about 10 minutes; dip greens, dumplings and pork chops out onto a platter.

Learn how to make pork chop dinner with rice and green mole sauce.

FOR GLAZE combine in food processor 1 TABLESPOON seasoning and pepper.

Add next 7 ingredients; process until smooth and set aside.

Coat the pork chops with the remaining 1 ½ TABLESPOONS seasoning.

Broil 5 ½ inches from heat 15 minutes; turn and baste with glaze every 5 minutes.

TO SERVE pile cooked rice on serving platter; arrange chops around the rice.

Drizzle green mole over rice and pass bowl of extra.

Broil 5 minutes on each side or until pepper looks blistered; cool.

Place chile pepper in food processor with apricots and next 9 ingredients.

Process mixture until smooth stopping once to scrape down the sides.

HOW TO MAKE PORK CHOP DINNER

Learn how to make pork chop dinners with parsnips and apples.

Brown pork chops over medium heat on both sides.

Place parsnips and onion on top of the chops.

Mix together the broth, mustard, salt, allspice and pepper.

Pour mixture over the vegetables; bring to a boil.

REDUCE HEAT; cover and simmer 35 to 40 minutes until pork is done.

Arrange apple wedges on the vegetables; cover and cook about 5 minutes.

Brown chops on both sides about 10 minutes on each side; set aside.

Place vegetables on top of noodles.

Place a piece of the ham and cheese on top of each pork chop.

Pound pork chops out to about ¼ inch thickness.

Season chops with salt and pepper.

Mix together the egg and water in shallow dish; set aside.

Combine in shallow dish the Parmesan cheese and breadcrumbs.

Dip each chop in egg mixture then in crumb mixture.

Heat oil in a large skillet over medium heat.

Cook pork in hot oil until browned on both sides (About 5 minutes on each side).

Arrange pork chops on top of pasta; top with the spaghetti sauce.

Bake about 25 minutes until chops are tender.

Top each chop with mozzarella cheese; bake another 5 minutes to melt cheese.