How to Make Shepherds Pie

First learning how to make shepherds pie you must know what it is. This pie is often confused with cottage pie and the two terms are often used synonymously. Cottage pies were developed during the late 1700’s as potatoes became a cheap main staple in Ireland. It was a way to use up leftover meat adding the potatoes with it.

In the 1800’s people learned how to make a shepherds pie recipe. Although this name is also used for the cottage pie, the basic difference is that shepherds pie is traditionally made with lamb. Both of these meat pies traditionally include potatoes and maybe other vegetables like chopped carrots, green beans or peas. Recipes today for both of these pies are often topped with mashed potatoes.

Learn How to Make Shepherds Pie in a Muffin

Recently I read an article in the Wall Street Journal about making savory cupcakes, specifically “lasagna cupcakes”. These are individual servings of lasagna in the shape of cupcakes. It seems this is the big craze in the entertainment world of Los Angeles.

Now I must tell you my first thought was “what a stupid idea”!  Having the love for creating food that I do, I gave the idea a second thought. I started thinking what purpose these cupcakes could serve. Now I love the idea but I am thinking more on the line of a quick meal or a “meal to go”.  I call it Painless Cooking’s “Tuffin Muffins”.

Thinking how to make shepherds pie came first to my mind thinking about my new “Tuffin” muffin recipes. More families are moving their dining out of the restaurants and into the home kitchen to save money in this bad economy. This muffin idea is a way to spruce up family dining to make dining at home special. With my shepherds pie recipe or cottage pie recipe, the vegetables are included in this giant muffin entrée. The children will get their vegetables and thoroughly enjoy eating at home. Another thought I have is that these can be prepared in advance and heated in the microwave. These would also work well when only feeding one or two people, like retires. 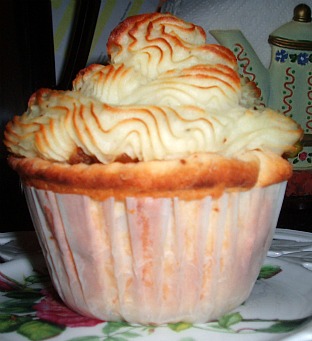 How to Make Shepherds Pie in a Muffin Tin 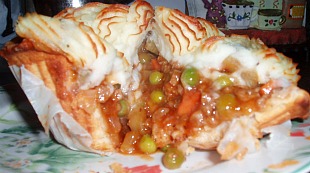 With a pastry cutter, cut in the shortening until crumbly.

Stir in enough milk to make a soft dough.

On a floured board, knead until smooth and roll out to ½ inch thick.

Cut with a large biscuit cutter and then roll biscuits out thin to fit into a paper lined jumbo muffin cup; press dough in cup and crimp around top.

With a fork press holes in the bottom and side of dough; bake until dough is dried, not brown.

Set out to cool while preparing filling and mashed potatoes.

Peel five medium potatoes cut in chunks and cook until tender while preparing the filling. When potatoes are tender, drain and place in mixing bowl. Add ¼ cup soft butter and beat into the potatoes. Add a little milk at a time while beating potatoes until light and fluffy. Season with salt and pepper.

Stir in the catsup and beef stock.

Combine the cornstarch with a little water until smooth; cook and stir into the beef mixture until thickens.

Season with salt and pepper and set off heat; stir in frozen peas.

Fill a large pastry bag with a large tip with the whipped potatoes.

In a circular movement, pipe the whipped potatoes in a mountain on top of the filling.

Place muffins in the oven and bake until the tops of the muffins are slightly browned.

HOW TO MAKE SHEPHERDS PIE RECIPE with lamb

Peel potatoes and cut in half; cook in salted water until tender about 25 minutes.

Heat oil in skillet and cook onion about 10 minutes; add meat and garlic to pan and cook 5 minutes.

Drain potatoes; mash with milk and half of butter.

Spread half of mashed potatoes over bottom of prepared dish.

Sprinkle the cheese over the top; dot top with remaining butter.

Bake about 15 minutes or until top starts to brown. Serves 6 to 8.

Although this is called a shepherds pie, technically it is a cottage pie. It is easy because it can be made with leftover beef and instant mashed potatoes. The cooking time is cut out and the baking is short.

Prepare mashed potatoes according to package.

Add grated onion to the hot water required for the potatoes; beat in the egg.

Spoon half of potato mixture in bottom of casserole; cover with the meat mixture.

Bake about 25 minutes or until golden brown. Serves 6.

HOW TO MAKE SHEPHERDS PIE for a crowd 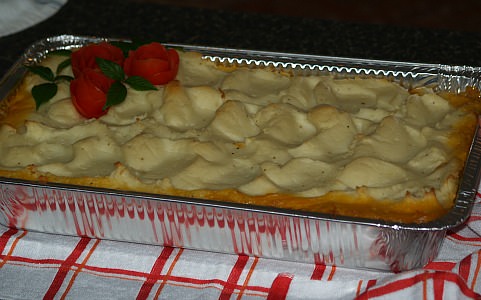 How to Make Shepherds Pie for a Crowd

NOTE: This recipe can be prepared ahead and refrigerated until ready to place in the oven. If you want to do only the meat filling, it can heat in the oven while preparing the mashed potatoes.

Bring mixture to a simmer; cook until vegetables are tender.

Combine flour with a little water to make a smooth thin paste (like sauce).

While still simmering stir flour mixture into the meat mixture; cook and stir about 7 minutes.

NOTE: I use disposable pans because I usually give these recipes away.

HOWEVER this recipe is very heavy (can be dangerous) for the disposable pans. A standard large roaster is better. If you choose to use a disposable pan, carry it with another tray under it for support.

In a large mixing bowl combine potatoes with cream cheese and butter.

Season with salt and pepper; spread mashed potatoes over top of the green beans.

Place in oven about 30 minutes or until potatoes start to brown. 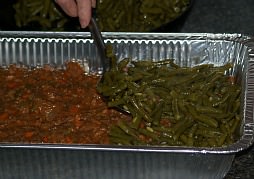 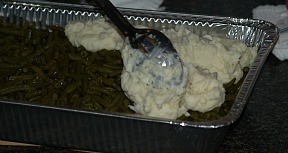 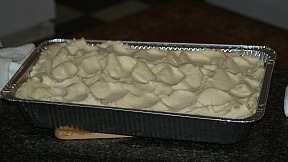 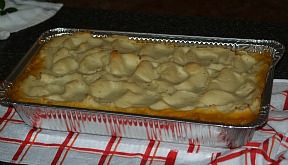 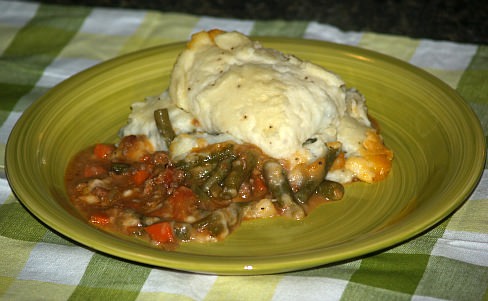 How to Make Shepherds Pie for a Crowd