How to Cook Hungarian Chicken Recipes

I learn how to cook Hungarian chicken recipes from my sister. You may recall me talking about what a good taste Hungarian food has. As I have explained before, my sister Gloria’s mother-in-law, Rose was from Hungary. She was also a very good cook. Many times when I was young I would spend a lot of time with my sister through the summer months. We would always walk to Rose’s house to visit and she was always cooking something good. 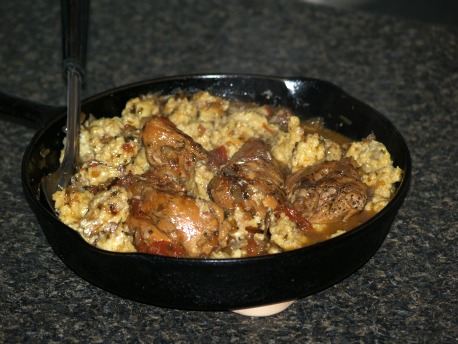 Chicken was usually one of the things she would be cooking. Many times she would deep fry lots of chicken to take to the church and it was so good; she let us try it. She also made the most delicious chicken paprikash recipe with little dumplings. Quite often when we visited her she would have a big pot of chicken soup ready on the stove which she always shared with us. My sister's mother-in-law learned how to cook her Hungarian chicken recipes from her mother and her mother learned from her grandmother; all were delicious!

The serving of the Hungarian chicken recipes is also a little different; even from me. For most of my recipes, I remove the meat from the bones to serve; other than fried chicken or roasted chicken. In the Hungarian recipes the chicken pieces are served whole; even when cooked in soups, stews, paprikash or whatever.

Cook chicken in water; when starting to boil skim off top (skim 2 or 3 times during cooking for clear soup)
Add all vegetables, salt and pepper; cook over low heat until chicken is tender.
Strain chicken and vegetables from broth; keep warm.
Use broth for cooking egg noodles or liver dumplings to serve with chicken and vegetables. 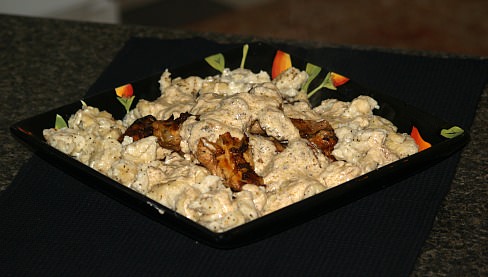 Cut chicken into pieces; brown in hot fat and remove chicken to platter.

Chop onion and lightly brown in fat left in skillet; return chicken to skillet with onion.

Add water to skillet; season with salt and paprika.

Cover skillet and simmer over low heat until done and tender about 1 hour.

While chicken is cooking make Hungarian dumplings (Recipe below).

When chicken is done place pieces on a large serving platter; surround chicken with cooked dumplings.

Stir flour and sour cream into skillet drippings and stir until smooth and blended; spoon sauce over chicken and dumplings.

This is how to make Hungarian dumplings to serve with any Hungarian chicken recipe. These are not as light as you may be use to, but I prefer these to the ultra light ones.

Beat eggs in mixing bowl with a fork or whisk; add flour, salt and baking powder on top of eggs.

Bring a pot of water with 1 teaspoon salt to a boil; drop by scant teaspoon of dough into boiling water.

NOTE: Occasionally scrape bottom of pan so the dumplings do not stick to bottom.

Remove cooked dumplings to a colander to drain.

NOTE: I place the dumplings in a clean skillet and toss in about 3 tablespoons of melted butter; then I keep them warm until the chicken is done and ready to serve.

Mix all ingredients thoroughly; drop by ½ teaspoon into boiling water or broth. (DON'T CROWD WHEN COOKING)
Cook about 20 minutes or until done.
Water may be added to batter if it is too thick.

NOTE: It should be thick like biscuit dough - I add only 1 to 2 tablespoons of water. 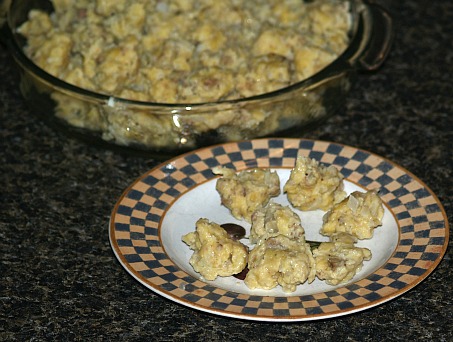 How to Make Hungarian Liver Dumplings

Sauté chopped onion in shortening; add paprika.
Add washed chicken and cut into pieces; add tomato, salt and 1 cup water.
Cover and cook for 1 hour or until the chicken is tender.
Add dumplings to stew 5 minutes before serving. 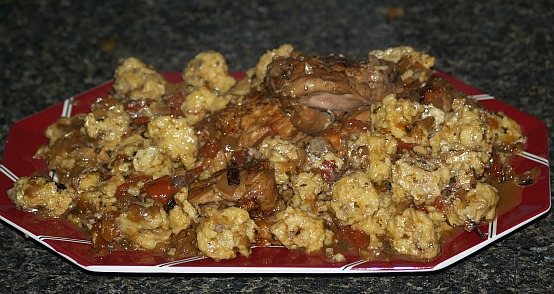 This is a very popular Hungarian chicken recipe.

You will find paprika included in almost all Hungarian chicken recipes.

Combine butter with seasonings and blend.
Brush cavity of chicken; center chicken on rotisserie and secure tightly.
Brush chicken with butter and seasoning mixture.
Insert short stem thermometer being careful not to touch bone.
Broil according to your manufacturer’s instructions until done.
Allow chicken to rest 10 minutes before serving.