How to Make International Foods

Learn how to make international foods and why they all belong to the American cuisine. We are the melting pot of the world. Always when people immigrated to this country from around the world, they brought along their familiar recipes and ingredients. Today, we have the pleasure of going to a close-by restaurant and enjoying which ever flavors that pleases our palate.

A favorite food for many of us comes from Italy. A lot of Italian – American dishes are smothered in heavily spiced tomato sauce. True Italian food is about fresh ingredients, carefully prepared to bring out the essential flavor and character. Some of the many flavors and colors of the lively Italian table are expressed by the fresh tomatoes, garlic, fish, herbs, hot pasta and green pesto. From region to region, traditional dishes from fine home cooks may vary a little, but use the same fine ingredients. Italians have been making cheese for thousands of years. These also vary from region to region.

The Greek cuisine is influenced by the fusion of the mainland and the cultures of Asia and Africa by the many Greek islands. Although the food of the regions may differ some, it is always characteristically Greek. The ingenious use of seasonal vegetables and locally available ingredients, produce practical, tasty dishes.

When you learn how to make international foods from “Spanish” countries, you will find they differ greatly. In Spain the food is not hot and spicy, as many may assume. It does not include anything resembling traditional Latin America dishes. Spain’s cooking is subtle and refined. The cuisine has a strong Middle Eastern influence because Spain was dominated by the Arab Empire for almost eight hundred years.

Peppers, along with corn and beans play such a vital role in the Mexican cuisine. Mexican cooking rests firmly on its Aztec and is still the most exotic of all. Nothing of this food lacks in flavor. The many types of hot, spicy peppers add flavor to all dishes. Homemade tortillas are an essential accompaniment. Beans, rice and tomatoes are all a part of the Mexican diet.

HOW TO MAKE FLAN

Flan recipes are among the famous Cinco de Mayo dessert recipes. Here in the United States and in parts of Mexico, May 5 is set aside to celebrate the Mexican victory over the French in the Battle of Puebla.

Combine sugar and water in heavy skillet; heat over medium low heat for 4 minutes.
Bring to a boil, stirring and washing down any sugar crystals clinging to the sides.
Cook syrup over medium high tilting and rotating until caramelized.
Pour into a 2 ½ quart ring mold; tilt to coat bottom and sides evenly and cool slightly.
In a large bowl combine and beat egg yolks, condensed milk, cinnamon and vanilla.
In another bowl, beat egg whites to soft peaks; fold whites into milk mixture until blended.
Pour custard into mold; set mold in larger baking pan and pour hot water 2/3 up sides of pan.
Bake in preheated oven at 350F degrees for 45 to 55 minutes or until knife inserted comes out clean.
Cool and then chill for at least 6 hours; unmold on chilled platter.
Spoon remaining caramel in pan over the top.

When you learn how to make international foods you will find that most are made with fresh ingredients. Some of the best that I have ever eaten have been in Costa Rica. The fresh vegetables grown in volcanic soil are so full of flavor. For such a small country it is so rich in diverse flavors. A hot cup of rich Costa Rican coffee served fresh tortillas and cheese or a fresh piece of corn cake makes a wonderful afternoon snack. Beans and rice dishes, flavored with cilantro, onions, garlic, green peppers or fresh tomatoes are served with most meals.

The international foods from Ecuador also consists of lush fresh vegetables grown in volcanic soil. Corn, potato and yucca were an important part of the indigenous diet. Many grains were eaten and typical fruit such as papaya, guava and pineapple. Diverse varieties of medical plants accompanied the seasoning. The original diet contained little meat, fish was the main resource. Eventually, there was a fusion of Iberian foods with the Andean. More fruits, vegetables and meats began to appear in the diet.

Being of Germany ancestry, this international foods brings back many happy memories. On weekends and holidays our very large meals were served around noon. They always consisted of meat, potatoes and vegetables; often adding several starches and several vegetables. Bread and butter were always on the table. Our reunion and holiday dinners were laden with rich, fattening foods. Specialties such as pickled pig feet and freshly baked cakes and rolls were on hand for the holidays.

The French cuisine is internationally known for its luscious desserts. The éclairs and Napoleons would make any mouth water. Much heavy cream is used in the cooking. A sauce or gravy flavored with wine usually accompanies the main dishes, served under the food. Parisian food has the delightful flavor of tarragon.

China is a vast country. Its regions are separated by mountains and rivers. It is natural that this international food is divided into each regions traditional style. Peking is characterized by sweet and sour sauces. Shanghi cooking is light and delicate soups to rich and savory meat dishes. Cantonese cook light and generally mild food. Szechwan and Hunan flavors are robust and spicy hot.

These are many of the international foods, which I consider part of the American cuisine. We are a fortunate country to be able to enjoy this vast range of foods within our reach.

HOW TO MAKE INTERNATIONAL FOODS like this
JOLLOF RICE RECIPE

This is one of the most flavorful International foods recipes. It is from Nigeria and is a favorite traditional dinner recipes.

Brown chicken pieces on both sides in hot oil in a large skillet; remove from skillet.
Set chicken aside and reserve drippings; add onion to drippings and sauté until tender.
Drain off extra fat from skillet and return chicken to skillet with onions.
Combine tomatoes and juice with chicken broth, bay leaf, ginger, salt and ground red pepper.
Pour tomato mixture over chicken; do not stir but bring to boil.
Reduce heat, cover and simmer for 30 minutes; skim off any fat.
Add rice making sure all rice is covered with liquid.
Cover and simmer 30 minutes longer or until rice is tender.
Remove bay leaf and sprinkle with chopped fresh parsley.

This international foods recipe comes from Latin America with all the tasty ingredients typical of this region.

BRIGADIEROS RECIPE This is a very popular international food 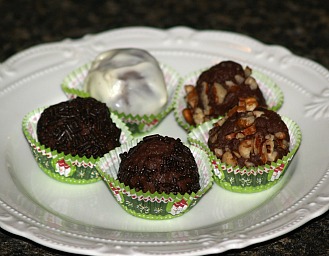 This one of the international foods recipes from Brazil; it is one of the many popular candy recipes so popular there.

Combine milk, cocoa powder and butter in a small saucepan.
Cook and stir constantly over medium low heat 7 to 8 minutes.
Candy will form ball around spoon and will pull away from sides of pan.
Cool to room temperature.
Butter hands and shape candy into 1 inch balls; roll each ball in chocolate sprinkles.
Place in individual mini cups; cover and chill.

This hearty meat pie is one of the international foods recipes originating from Quebec.

Brown ground meat and bacon pieces in Dutch oven; drain off extra fat.
Stir in meat mixture onion, celery, garlic, sage, salt and pepper; stir in 1 cup water.
Bring mixture to a boil; reduce heat, cover and simmer for 10 to 15 minutes stirring often.
Combine cornstarch and remaining water; add to hot mixture and stir until thickened.
Cook 2 minutes longer; remove from heat and cool slightly.
Prepare pastry; roll out half of dough and line bottom of 9 inch pie plate.
Fill pastry shell with meat mixture.
Roll out remaining half of dough; cut out a maple leaf shape in the middle.
Place rolled dough on top of filling; trim around pie shell and crimp edges to seal.
Bake in preheated oven at 400F degrees for 35 minutes or until golden brown.
Set 15 minutes before serving.

Combine and blend flour and salt; cut in shortening until crumbly.
Gradually add tablespoons of cold water to form dough.