Learning how to make key lime cake recipes is a necessity to enjoy the flavor. These must be made with real “key lime”. Many people use the standard lime which most of us are use to make this cake recipe but there is a difference. First you will notice the obvious difference when purchasing by the size. It is about half the size of the normal green lime. A key lime is usually picked when green but when it is ripe it turns yellow. It has a strong aroma and the skin is thinner than regular larger limes.

When you have learned how to make the key lime cake you will be able to taste the difference then when making one with regular lime. They are not interchangeable in recipes. The key lime is more acidic than lime so the taste is a little more tart and bitter. The two limes are quite different in taste when baking or cooking.

I became so familiar with key limes when I moved to Florida. From Day 1 I heard about the big craze for this fruit, especially in the “key lime desserts” but no knew how to make key lime cake recipes. For several years I thought this fruit was native and only found in Florida; particularly in “The Keys”.

To my surprise, I found this fruit under other names like Mexican lime and West Indian lime has also made its mark on many other parts of the world. Traders carried the key lime with them all through Europe, Middle East and elsewhere. Spanish settlers brought this fruit with them to South Florida and here it was given the name “Key lime”.

Many people and restaurants, particularly in South Florida are well known for their recipes using Key limes; drinks, meat and seafood marinades and desserts.  Most I will say are for the Key lime pie recipes but that is because they never learned how to make key lime cake recipes and enjoy the wonderful flavor. 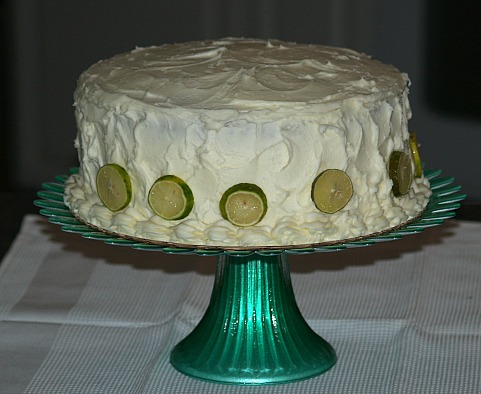 This key lime cake recipe and the frosting only have a hint of key lime. By spreading this wonderfully flavored key lime cake filling between the layers, the taste is delicious.

Filling: This filling should be made ahead of time and refrigerated; it can even be made a day ahead.

For Filling: Combine sugar, cornstarch and salt in a saucepan.

Over medium heat bring to a boil white stirring; boil 1 minute or until mixture thickens.

Stir some of the hot mixture into the beaten egg yolks.

Stir yolk mixture back into hot mixture in saucepan; stir until blended.

Remove from heat and stir in the key lime juice.

Cool to room temperature and then refrigerate 2 hours or more.

Combine and sift flour, baking powder and salt; set aside.

Cream butter and 1 ¾ cups of sugar until very light and fluffy; beat in key lime juice and vanilla.

Add flour mixture alternately with milk to the creamed mixture; beat until smooth.

In a clean bowl beat the egg whites on high speed until foamy; gradually add the remaining ¼ cup sugar.

Bake about 25 minutes or until pick comes out clean. 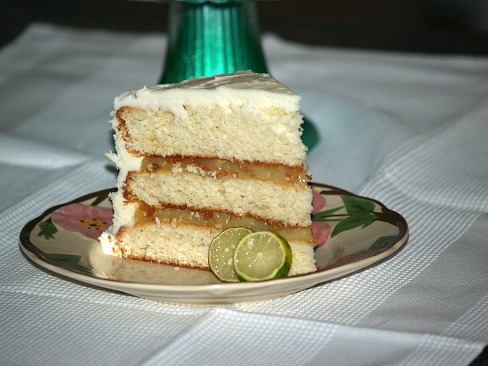 This is a very flavorful key lime cake recipe.

Cook and stir in top of double boiler until mixture thickens a little about 10 minutes.

Refrigerate at least 4 hours; it will set up when cold.

Put layers together on a serving plate; spread each layer with whipped cream key lime mixture.

Learn how to make a key lime cake recipe as a sponge cake.

Add the boiling water a little at a time while beating; add key lime juice and vanilla.

Add flour mixture a little at a time while mixing well.

Spoon batter into an ungreased tube pan; bake about 45 minutes.

Grease and flour the bottom of 9X13 inch cake pan.

In medium bowl combine condensed milk and 1 CUP of the coconut milk.

Pour the milk mixture over the warm cake; cover and refrigerate until chilled.

Beat on high speed of mixer until thickened and spreadable.

In large bowl combine ice cream and 1 CUP of the coconut.

Add the cream of coconut and lime zest; mix until combined.

Top with whipped topping and sprinkle with toasted coconut before serving.

Learn how to make a key lime cake recipe with lime gelatin and cake mix.

Prepare cake according to package directions; bake in prepared pan.

With a toothpick make holes over top of cake about 1 inch apart.

Slowly spoon gelatin mixture over top of the cake.

Refrigerate the cake until cold.

Spread topping over the cake; store in refrigerator.

Learn how to make a key lime cake recipe with a coconut cake.

FOR CAKE combine flour, baking powder and ¼ teaspoon salt in bowl; set aside.

Cream shortening in a large mixing bowl; beat in ¾ CUP of sugar until fluffy.

Beat in egg YOLKS one at a time beating after each addition; beat in vanilla.

Fold in 1 cup of toasted coconut; set aside.

Beat in the flour mixture alternating with milk; beat until batter is smooth.

With CLEAN bowl and beaters beat egg WHITES and ¼ teaspoon salt until foamy.

Beat in cream of tartar until soft peaks; slowly beat in ½ CUP of sugar.

Bake for 30 to 35 minutes until pick comes out clean.

Cool in pans 10 minutes; remove from pans and cool completely.

FOR FILLING combine in saucepan the sugar and next 4 filling ingredients.

Over medium high heat stir and cook mixture until it comes to a rolling boil.

Cook and stir until it thickens; stir in butter and set off to cool.

TO ASSEMBLE split each cake in half horizontally with serrated knife.

Place one of the halves on a cake plate cut side up.

Spread with 1/3 of the filling leaving ½ inch border.

Sprinkle ¼ cup coconut over top; top with cake layer cut side down.

Over moderate heat bring mixture to a boil stirring occasionally to dissolve.

Uncover; cook (No stirring) until it registers 240F degrees on candy thermometer.

Beat on high speed until frothy; slowly pour in hot mixture while besting.

Beat in vanilla; continue beating until bowl is no longer hot.

NOTE: If frosting gets too stiff beat in up to 1-2 tablespoons hot water for consistency.

Spread frosting over sides and top of cake; top with 1 ½ cups toasted coconut.