How to Cook Lamb Stew

I learned how to cook lamb stew because it is the favorite of the traditional Irish recipes for most of the Irish people. Irish lamb recipes are so popular and stew is a hearty and robust dish so welcoming to a colder damp climate like Ireland.

This recipe was traditionally made with lamb or mutton. The long cooking period for stew allowed time to tenderize the cheaper more available cuts of meat. These recipes can be conveniently prepared early in the morning and left on all day cooking.

I learned how to cook many lamb stew recipes, each adding a variety of other ingredients at the time of making. Because potatoes have been so abundant in Ireland, they are almost always included in the recipes. You will find recipes which also include parsnips, turnips, onions, carrots and many other locally grown vegetables. Many people also like to add grains to their stews like barley. You will also find recipes in which locally brewed beer and whiskey is used to enhance the flavor.

I learned how to cook lamb stew like this Irish stew.

In a large skillet, brown the onion and the lamb in hot oil. Put in a slow cooker. Add the remaining ingredients and stir to blend well. Cook for 6 to 8 hours until meat is tender. NOTE: you could put these ingredients in a covered roaster instead of a slow cooker and place in the oven at 350F degrees for 1 to 2 hours, checking meat for tenderness. You may need to add a little water if it get too dry. I do this quite often.

HOW TO COOK LAMB STEW WITH VEGETABLES 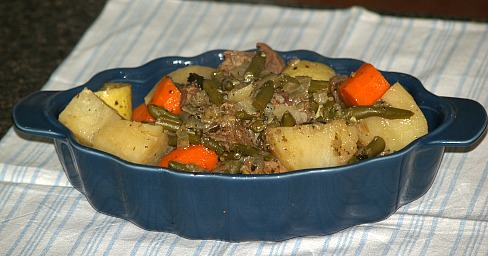 How to Cook Lamb Stew

Many stew recipes as well as most Irish stew recipes include many locally grown vegetables making these dishes very healthy.

Sauté mixture until tender; add enough hot water to cover meat, cover with lid and simmer on low heat about 1 hour or until meat is tender.

HOW TO MAKE IRISH STEW

Gradually blend in milk; add enough milk to be able to drop by spoonfuls.

LAMB STEW RECIPE made with shanks

In a large Dutch oven, roll shanks in flour and brown in hot oil; remove from pan to platter.

Add chopped onion and garlic to pan with hot oil; stir and brown.

Return lamb shanks, potatoes and carrots to pan with onion and garlic.

Bake about 90 minutes or until tender.