How to Make Mexican Pork Recipes

Up until the Mexican Conquest, the people did not learn how to make Mexican pork recipes; these were not a part of their cuisine. The indigenous people would hunt wild game but other than that would feed on amaranth, insects like grasshoppers and turtle eggs as sources of protein. Other edibles were sweet potatoes, squash, chili peppers and seeds.

When the Spanish arrived, they introduced many different foods and techniques to the natives; this was the start of learning how to make Mexican pork recipes. Other foods included cows, chickens, goats and sheep for meat and milk. The cooking technique of frying, which is so popular among the Mexican people today, was also introduced at this time.

In the central and southern parts of the country is where you will find the people have learned how to make Mexican pork recipes. The indigenous people of the North were hunters with little influence of the agriculture. When the Spanish came they found uses for raising beef in this Northern region, This remains evident still today in that there are limited Mexican pork recipes and more beef in the cuisine.

In the regions where pigs are raised, Mexican pork recipes are standard in the everyday diet.  More pork rinds are eaten in Mexico than any other part of the world. Bacon is used liberally to add flavor; even with the introduction of the American hot dog, bacon was wrapped around it for more taste. Cooking pork over the open fire is a common occurrence as well as using ground or chopped port in the tacos and other traditional dishes.

In a Dutch oven, warm the oil over high heat until hot but not smoking. Add the pork and sauté for 1 minute. With a slotted spoon transfer the pork to a plate and cover to keep warm.

Stir in the bell peppers, onions, garlic, the remaining 1 tablespoon of the chili powder, the remaining 1 teaspoon cumin, salt and cayenne. Reduce the heat to medium stirring occasionally until the vegetables are tender about 10 minutes. Stir in the cans of chilies. Sprinkle in the flour and stir to blend about 1 minute.

Stir in the chicken broth, mixed vegetable juice and beans. Increase the heat to high and bring to a boil. Reduce the heat to low, cover and simmer for 20 minutes for the flavors to blend.

Return the pork and any juices that might have collected on the plate, to the pan and simmer 10 more minutes. Stir in the corn and cook to heat thoroughly.

Remove from the heat and stir in the chopped tomatoes and green onions and serve hot. 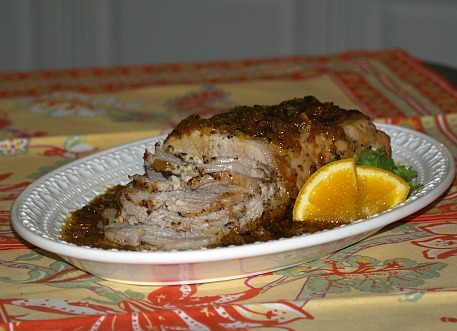 How to Make Mexican Pork Recipes

Preheat oven to 350F degrees.
Heat 2 tablespoons olive oil in skillet; sauté onion and garlic until tender.
Transfer to Dutch oven.
Season roast with salt and pepper; brown on all sides in skillet in remaining oil.
Move roast to Dutch oven.
Combine orange juice, jalapeno peppers and oregano; pour over the roast.
Seal pan with aluminum foil; bake in oven for 2 hours or until tender.
Transfer sauce to skillet; boil and stir until thickened.
Serve sauce over sliced roast.

Arrange pork in one or two layers in heavy saucepan.
Barely cover with water and season with salt.
Cover and cook over medium until almost tender about 30 minutes.
Drain off most of broth and reserve adding enough water to make 2 cups.
Continue cooking pork uncovered until fat is rendered and pork is slightly browned.
Slit the chilies with sharp knife lengthwise and remove stems, seeds and veins.
Cover with boiling water and set aside to soak for 15 minutes; drain.
Pour 1/3 cup of pork broth into blender; add garlic, cinnamon, bay leaf and oregano; blend until smooth.
Add mixture to pork in pan and fry a few seconds.
Add 1 more cup of the broth and the drained chilies (a few at a time) in blender and puree.
Strain pepper mixture through sieve over pork pressing to get as much as possible in the pan.
Cook about 5 minutes scraping pan so as not to stick.
Add remaining broth to pan and cook over low until meat is tender and sauce is thick.
Season with salt and serve with cooked rice.

Brown ham in 1 tablespoon hot oil in a large pot.

Add drained beans to the pot; cover with fresh cold water and bring to a boil.

Reduce heat and simmer covered about 2 hours or until beans are tender.

NOTE: Beans with thicken so make sure they do not dry and burn.

Combine eggs and milk in a bowl; mix well.

Dip pork in egg mixture then dredge in flour mixture.

Fry meat in a skillet with hot oil over medium high heat until pork is thoroughly cooked.

Place equal amounts of meat, cheese, tomatoes, lime juice and a bit of salsa in the center of each tortilla; fold over.

Spray a large skillet with oil spray; brown each tortilla on both sides allowing cheese to melt.

Top with salsa and sour cream to serve.

This is a traditional Mexican pork recipe.

Wrap each pig’s feet tightly in cheesecloth and tie with a string.

Cover with water; bring mixture to a boil then reduce heat.

Cover and simmer until tender 3 ½ to 4 hours; remove pot from heat and let stand until cool enough to handle.

MAKE SAUCE by processing 1 onion, garlic and tomatoes to a puree.

Drain liquid from pig’s feet; pour sauce over and reheat.