We love Mexican soup recipes for the same reason we love all Mexican food; all the flavorful ingredients. Although I enjoy this type of food all through the year, these highly seasoned soups are really appreciated during the cold winter months. Hot spicy soup recipes seem to work miracles if you have one of those congested head colds. No matter what time of the year, if sick or not, the flavors of these delicious soups are always appreciated. 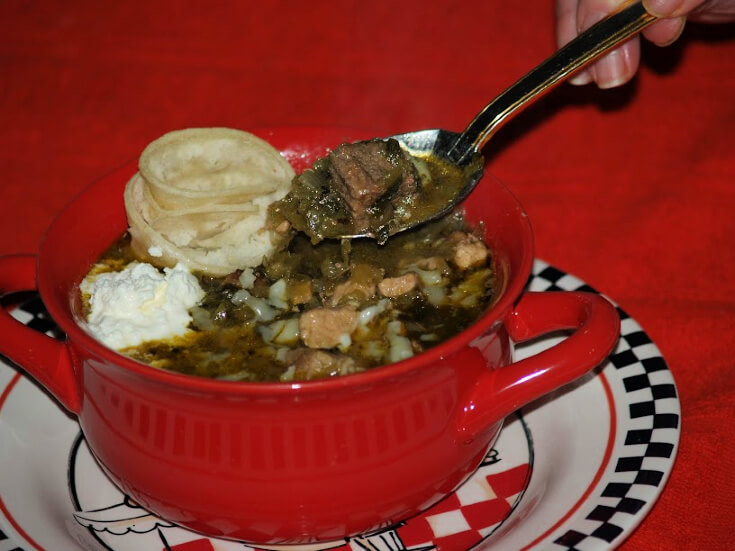 Most of my Mexican soup recipes contain onions, celery, green bell peppers and lots of fresh garlic. Depending on the type of soup other ingredients are added. Of course, if meat is needed in the recipe it is done at the appropriate time, usually at the beginning unless you are simply adding cooked meat. The most important ingredients for these soups to set them apart from other soups are the herbs and spices. I love fresh chopped cilantro, fresh or dried oregano, cumin, chili powder blends, cinnamon, nutmeg and even dried garlic or numerous other seasonings. Toward the end of cooking I adjust the spiciness with different kinds of hot pepper. Some of my favorites which I always keep on hand are jalapeno peppers, various dried hot peppers, red pepper flakes, cayenne pepper, homemade hot pepper oil and a good quality hot pepper sauce.

Some thick Mexican soup recipes start by cooking meat. You can add various other ingredients to the meat making like stews. Creamy thick soups can be either with meat or without and are creamed with milk, creams, sour cream, various cheeses or combinations for delicious flavor. Other Mexican soup recipes need a rich tasting broth for the base. You can make this with vegetables or different types of meats. Even when I make a beef or pork soup which needs a broth, I prefer a basic rich chicken broth. Of course, when I make it I like to add vegetables and great herbs for flavor.  For extra richness, I always add enough condensed chicken base or bouillon to achieve the flavor I want. 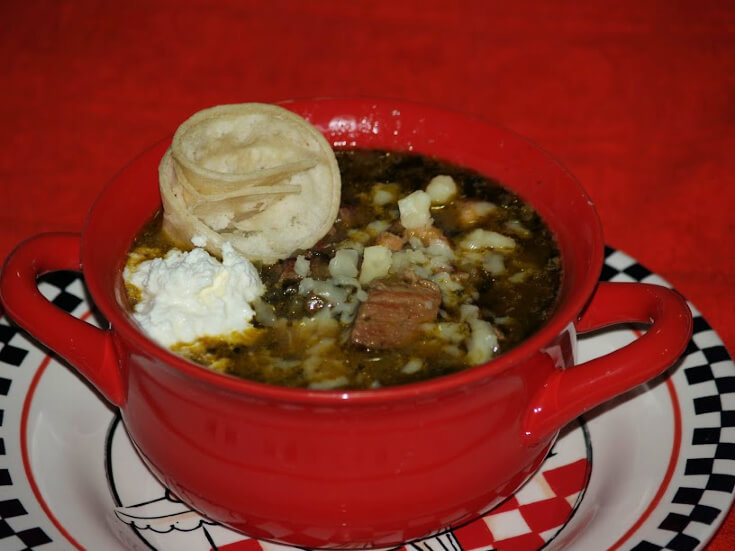 Make Mexican soup recipes with a selection of meats.

Cook and stir meats with oil in a large Dutch oven over medium until browned.

Drain meats well and spoon into a large soup pot; set aside.

Cook and stir the onion, minced garlic and cilantro until onion is tender.

Add onion mixture to the meat in soup pot.

Add the chicken broth and next 12 ingredients to the soup pot.

Bring soup to a boil; REDUCE HEAT and simmer uncovered for 30 minutes. 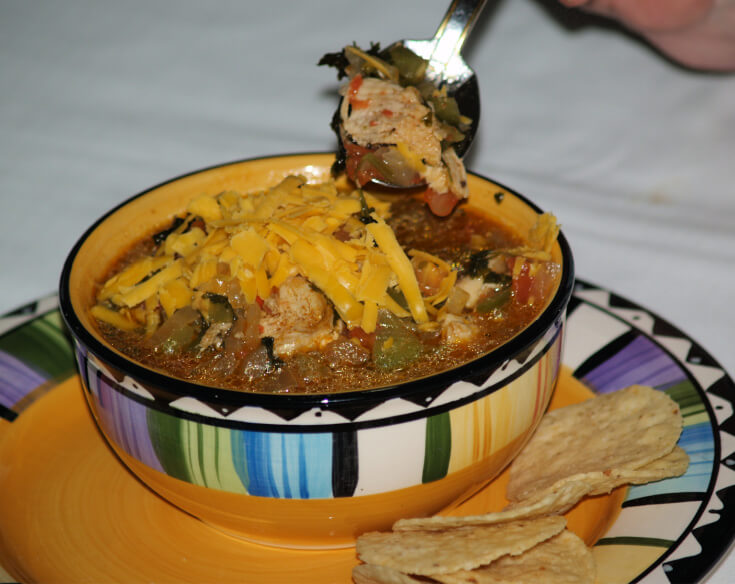 Combine first 11 ingredients in a large Dutch oven; bring to a boil.

Remove the bay leaf; stir in diced chicken and cook until thoroughly heated.

Add the bay leaves, coriander and peppercorns to the pot.

Cover with fresh water allowing for the amount of broth you want.

NOTE: If you want an extremely large amount of broth you might want to cook 2 chickens or add commercial broth to it. I usually add the water and after cooking I add chicken soup base if I need a richer flavor.

Slowly bring the pot to a boil skimming off the foam which appears on the top.

Reduce the heat, cover with a lid and simmer 30 minutes until chicken is tender.

Add the oregano; add the chicken soup base to adjust the flavor.

Simmer for about 15 minutes longer or until chicken is done.

Remove chicken to a plate; remove meat from bones and save for other use.

Set pot off to cool; strain broth and place in refrigerator overnight.

Before using skim solid fat from the top.

Stir in cumin, oregano and tomato paste; cook and stir for 2 minutes.

Puree in food processor chicken broth and 1 CAN of the beans with juice.

Add pureed bean mixture to the pot; stir in 1 CAN beans with juice mixing well.

Bring to a boil over high heat; REDUCE HEAT and simmer about 10 minutes stirring frequently.

Stir in sherry; season to taste.

Mexican soup recipes and other Mexican recipes often include jicama. This crisp white tuber is very popular in Central America and adds crunch to the dish.

Place tray under broiler 5 inches from the heat source.

Leave door partially ajar; broil 5 minutes on each side until blistered.

Peel the pepper, remove and discard seeds; set aside.

Place tomatillos in saucepan and cover with water.

Bring water to a boil and REDUCE HEAT; simmer 6 minutes until tender.

Drain tomatillos and set aside to cool.

Add to processor the garlic and next 5 ingredients; process until smooth.

Pour the cream into a serving bowl; stir the tomatillo sauce into the cream.

NOTE: It is IMPORTANT to stir sauce into cream (Not cream into sauce) to prevent curdling.

Sprinkle soup with the jicama and serve immediately; makes 3 cups.

Mexican soup recipes from Northern Mexico sometimes contain pumpkin but curry and the other ingredients are popular all over Mexico.

Add the broth and pumpkin to the casserole; stir to blend.

Cover dish and microwave on high for 10 minutes; stir in the milk.

In 2 batches (4 Cups each) pour soup into processor and puree.

Make Mexican soup recipes with flavorful chorizo sausage and some of my favorite seasonings.

Drain, crush and set aside.

Over medium heat brown sausage; drain well and set aside.

Broil 5 inches from heat about 5 minutes on each side until blistered.

Cook and stir over medium heat until vegetables are tender.

Stir in the flour; gradually stir in the water and chicken broth.

Bring mixture to a boil; REDUCE HEAT to a simmer and cook 30 minutes.

Add the bay leaves and ham to Dutch oven; bring to a boil.

Combine onion, carrot, garlic and oil in a large skillet; cook until tender.

Add skillet mixture to the lentils; add potato and next 5 ingredients.

Stir in the parsley; remove bay leaves from soup and discard.

Combine onion, pepper, garlic and oil in a large saucepan; sauté until tender.

Add remaining ingredients and mix well; bring to a boil.

Cilantro is one of my favorite herbs in Mexican soup recipes.

In food processor puree spinach with 2 CUPS of the chicken broth.

Add cilantro and process until cilantro is coarsely chopped.

In a large saucepan melt the butter; sauté the onion, garlic and serranos.

Add pureed mixture to the saucepan and 4 CUPS of the broth; simmer for 12 minutes.