How to Make Monkey Bread Recipe

Have you ever learned how to make a monkey bread recipe? It has become very popular over the years because of the delicious flavor baked throughout the loaf. You might hear it also referred to as bubble bread, golden crown, bubble loaf, bubble cake or a coffee cake. Although the most famous is like sticky buns made with cinnamon and sugar throughout the loaf, many recipes are not sweet. Some are flavored with butter, spices and Parmesan cheese.

When learning how to make a monkey bread recipe, you will find it is truly an American idea although I have no idea who started it. I am going to “guess” that it originated with one of the frozen bread companies. I say this because some of the oldest recipes I have were on scraps of paper which appear to have been cut from one of these frozen loaves.

It seems that no one in the other countries have any idea how to make a monkey bread recipe or what it is like. The sweet sticky version is traced back to the 1950’s which seems to be the beginning. Pieces of yeast dough were dipped in butter, cinnamon and sugar and then layered in a tube pan for baking; sometimes nuts were also added. After baking the pieces could be pulled apart for eating. It is very delicious!

Later, it seems the non sweet versions originated. The ones made with Italian spices, butter and Parmesan cheese makes a great accompaniment to pasta dinners. As I said because of the technique of rolling the pieces of dough in the seasonings is what makes it so flavorful and delicious. If you have not tried it, now is the time. Remember the frozen bread is a quick and easy way of making it. 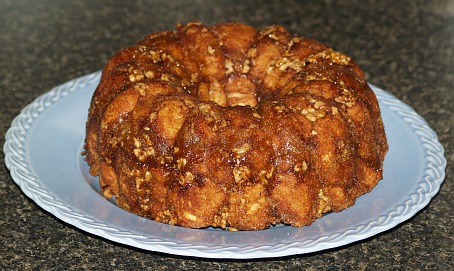 How to Make Monkey Bread Recipes

Combine scalded milk, oil, salt and sugar in a large mixing bowl and stir to blend; cool to lukewarm. Add the eggs and mix well. Combine yeast and 2 cups of the flour and add to the milk mixture in mixing bowl. Add just enough of the remaining flour to make soft dough and mix well. Turn out onto a floured board and knead until smooth and elastic, about 10 minutes. Place in a greased bowl, cover with a clean cloth and let it rise until it doubles in bulk. Punch down and let set for 10 minutes.


Melt the butter. In a bowl combine and mix the nuts, sugar and cinnamon. Make small balls out of the dough. Roll the balls in the butter and then in the sugar mixture. Place balls in a greased tube pan in staggered rows until all the dough is use. Let dough rise until it doubles in bulk.


Preheat oven to 350F degrees. Bake for 45 minutes. Remove the monkey bread from the oven and turn out onto a large plate.

Combine brown sugar, sugar, butter and orange juice in a large bowl.
Add quartered biscuits and mix to coat all pieces.
Spoon ½ of biscuits into Bundt pan; sprinkle with pecans.
Layer remaining biscuits on top; bake at 350F degrees for about 35 minutes.

Grease with shortening Bundt pan.
In large bowl dissolve yeast from roll mix in warm water; stir in cheese, herbs and egg.
Add roll mix and blend well; knead dough on floured surface until no longer sticky.
Roll out dough to 12 inch square; brush with 2 tablespoons melted butter.
Cut into 25 squares; overlap each square in greased pan with buttered side down.
Brush dough with remaining butter; sprinkle with poppy seeds.
Cover and let rise in warm place until light and doubled in size; about 60 minutes.
Preheat oven to 375F degrees; bake 20 to 25 minutes until golden brown.
Immediately remove from pan.

Combine yeast to water and stir to blend; set aside.

Combine sugar and salt in a mixing bowl; set aside.

Add ½ cup of the butter to the hot milk stirring until melted; pour into sugar mixture and let cool to lukewarm (About 112F degrees).

Place dough in a greased bowl turning to coat; cover and set in warm place to rise until doubled about 1 hour.

Turn dough out onto a lightly floured surface; roll out about ¼ inch thickness.

Cut dough into diamond shapes about 2 ½ inches across.

Melt remaining ¼ cup of butter; dip diamond pieces of dough in butter and layer in a 9 inch Bundt pan.

Let dough stand in warm place to rise again until double in bulk about 45 minutes.

Bake about 30 minutes or until golden brown.

Combine in a large mixing bowl 1 ½ cups of the flour, yeast, sugar and salt; set aside.

Place dough in a greased bowl turning to coat; cover and let rise until doubled about 30 minutes.

Turn dough out onto a lightly floured surface; knead lightly until smooth; divide dough in half.

Roll each half of dough to 12X18 inch rectangle; cut in ¾ inch strips and then crosswise in 3 inch pieces.

Dip each piece in melted butter; then toss into tube pan (In DISORDERLY fashion).

Cover and let rise in warm place about 1 ½ hours until double in bulk.

PREHEAT OVEN TO 425F degrees; bake about 30 minutes until golden brown and turn out on rack to cool.

NOTE: If you use a 2-piece tube pan; set on tray in oven so butter does not run in oven.