How to Make a Peach Pie Recipe

Thinking about learning how to make a peach pie recipe brings back many good memories from years ago. When I was a child, every summer I would go with Mom and Dad to the peach orchards. We would get the most delicious sweet peaches. Of course, I could not stand to touch them because of the peach fuzz. Dad would bite right through the fuzz to taste them and make sure they were worth buying. Chills ran up and down my spine watching him eat the peach with the fuzz. 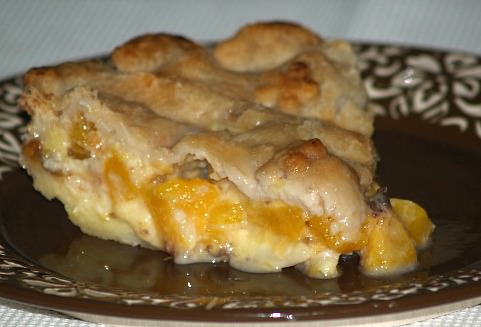 Now, the peach pie recipe was totally a different story. When Mom learned how to make a peach pie recipe the peach peel never bothered her. After we got home from buying peaches Mom would mix up a bunch of pie dough. Then she started peeling that “awful fuzz” from a bunch of the fruit. When she finished peeling, she stuffed the pies full of the delicious juicy peaches. When they started baking in the oven, I no longer thought about the fuzz but only about how soon would the pies be done. As soon as they were taken from the oven, we were all waiting for a piece. We couldn’t wait for them to cool at all. We all got a piece piping hot from the oven. How delicious!

When I learned how to make a peach pie recipe I found peaches are classified in two groups: freestones and clingstones. The freestones are the ones where the "flesh separate" quite easily from the pit “or seed”. The clingstones are where the flesh clings tightly to the pit.  Although the states of California, South Carolina and Georgia are known to be “peach states” here in the United States, it seems we always had fresh peaches to pick in Ohio.

Tempt your senses with your favorite peach pie recipe! Every summer produce stands begin to appear along the highways selling wonderful fresh peaches. If you are learning how to make a peach pie recipe, this is the best time to make all those delicious peach desserts.

For your convenience I am adding a pastry dough recipe to make if you are learning how to make a peach pie. You might already have a favorite you want to use or you can purchase many already made from your grocery.

Sift together flour and salt; cut in shortening until crumbly.

Sprinkle in ice water and toss until dough ball forms until all is moistened; shape into 2 balls.

NOTE: I mix the dough and then place the balls in the refrigerator until I mix up the peach mixture.

For single crust roll half of dough to 1/8 inch thickness and fit into plate.

For a double crust after fitting plate, roll remaining ball to cover top.

Trim dough around ¼ inch larger than plate and crimp as desired. 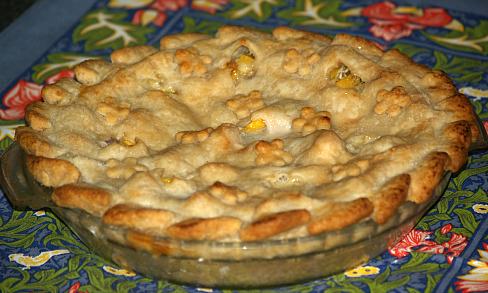 Learn how to make a peach pie recipe like the Georgia people make them.

Prepare pie plate with a bottom crust; set aside but DO NOT BAKE.

Peel peaches and cut into small pieces; add to egg mixture and stir until well coated.

Trim around pie plate and crimp as you desire; brush top with 2 tablespoons melted butter and sprinkle with sugar.

Bake for about 40 minutes; COVER RIM OF CRUST with foil and continue baking 15 to 20 minutes longer.

Center will be bubbly and crust golden brown; cool to room temperature before serving. 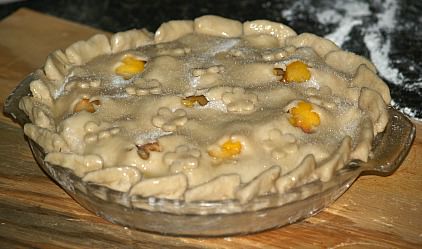 Preheat oven to 375F degrees.
Line pie pan with half of pastry dough; reserve other half for top.
For filling melt butter in large saucepan; add peaches and whipping cream, cinnamon and nutmeg.
Cook and stir over medium high heat until mixture comes to a boil.
Add brown sugar, reduce heat and simmer 15 minutes; add schnapps.
Combine bourbon and cornstarch; stir into peach mixture.
Cook and stir until mixture comes to a boil and thickens.
Remove peaches from sauce with slotted spoon and place in unbaked pie shell; discard excess sauce.
Moisten pastry edge with water; roll top dough and place over peach filling.
Trim dough and crimp around rim; cut slits to let steam escape.
Bake 35 to 40 minutes until filling in center is bubbly and crust golden brown.

Combine the 1 cup sugar, salt and cornstarch in a saucepan. Stir in the water and peaches. Bring to a boil; boil 1 minute. Add the lemon juice and cool. Put peaches into the pie shell.

For the crumb topping, mix together with your fingers the flour, butter and ½ cup of sugar until they are fine crumbs. Spread evenly over the peach filling. Bake 10 minutes at 425F degrees then reduce to 350F degrees and bake 30 minutes longer.

This is always a favorite peach pie recipe.

This pie has a cake like crust. For the crust combine the flour, baking powder, salt, pudding, butter, egg and milk. Beat with a mixer for a few minutes to blend. Pour into a greased 9 inch pie plate. Set aside.

Place the drained peaches over the crust. Combine the cream cheese, ½ cup sugar and lemon juice. Blend until smooth and pour to within one inch of the rim of pie dish.

Mix the 1 tablespoon sugar with the cinnamon and sprinkle over the top of pie. Bake for 35 to 40 minutes. Let set until pie cools and then refrigerate until cold before serving.

HOW TO MAKE PECAN PIE WITH PEACHES

This peach pie recipe is very popular in the Southern United States.

Brush top with milk; bake about 50 minutes until middle is bubbly and crust is golden brown.

NOTE: If crust begins to get too brown cover rim with foil; cool to room temperature before serving.