When you learn how to make a pecan pumpkin pie recipe you will probably find a recipe in any southern cookbook you pick up. Both the pumpkin and the pecan tree are native to North America. Many uses for the pumpkin were learned by our first settlers in the original colonies as soon as they arrived. The Indians showed the colonists the pumpkins and how to cook them.

There is some evidence that the idea of Pumpkins being used as a pie filler came to the United States along with more early settlers. When I learned how to make a pecan pumpkin pie recipe I found that it was not a traditional Thanksgiving recipe unlike a basic pumpkin pie was. As our country grew, the production of pumpkins did also; now being grown in most parts of the country. I do not know as fact, but I would say the first pecan pumpkin pie came later.

Although both the pumpkin and pecans are native to the United States, I can find no documentation to show the two being put together in a pie until the twentieth century. There were wild pecans growing when the first pilgrims arrived in the New England colonies but they were sparse and considered a delicacy.

In the late eighteen hundreds is when the commercial growing of the pecans began. Today, the United States produces almost all of the world’s pecans.  This is done in many of the southern states; Georgia being number one; some other states being Texas, South Carolina and Arkansas. As I was learning how to make the pecan pumpkin pie recipe, I assumed that the abundance of pecans produced here is what brought about this recipe.

There is evidence that the French immigrants that settled in Louisiana developed the first pecan pies in the eighteen hundreds. I can find no documentation of pecan pumpkin pie recipes before the nineteenth century. After that, they are recorded in almost every cookbook you read. If you pick up a Southern cookbook, especially one from the state of Georgia or Louisiana, it is guaranteed to include a pecan pumpkin pie recipe. 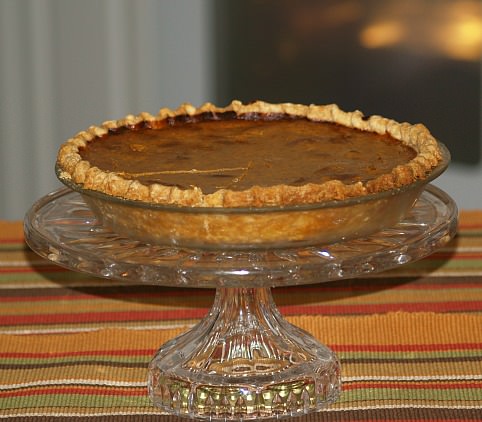 Spread evenly over bottoms of pie shells and press down.

Bake for 10 minutes; remove and cool.

Turn heat down to 350F degrees.

Combine milk and water in a saucepan.

Bake for 50 minutes; Custard will set as it cools. 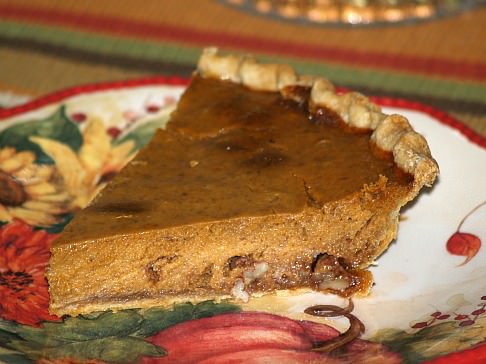 The following pumpkin pie recipe has coconut added to the pumpkin and pecans for additional flavor.

Combine and mix together the pumpkin, eggs and milk; add to the dry ingredients and blend thoroughly.

Pour mixture into prepared pie shell and bake for 10 minutes.

Leave in oven and bake an additional 30 minutes until custard is set.

Remove from oven and cool before serving.

Stir in chopped pecans and spread over filling; bake 45 to 55 minutes until knife inserted in center comes out clean.

Cool to room temperature; garnish with whipped cream and pecan halves to serve.