How to Make Pickle Recipes

When I first learned how to make pickle recipes, I thought they were all made with cucumbers.  To some people pickles are anything, especially vegetables like peppers that have been canned in pickle brine. I always though they were only cucumbers; they could be small or large, sliced or in chunks. I quickly learned that pickles could be made sour, dill, sweet or hot and spicy but I still thought they were all made with cucumbers.

One important point to remember when making pickles is to follow the recipe closely. You never want to cook pickles longer than the recipe instructs you to. Overcooking will make them too soft. 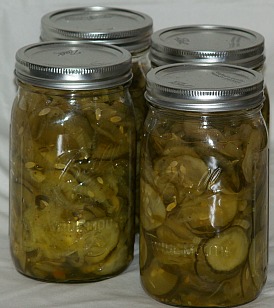 When you learn how to make pickle recipes, the cucumbers need to be sound and firm not in the least bit overripe. To preserve the crispness when the recipe calls for slicing, use a knife for the slicing, do not use an electric slicer of any kind.

Although it takes longer for the flavor to be absorbed in the pickles, I do like to pickle whole cucumbers for dill pickles. The bread butter pickles below are one of my favorites. This recipe came from my sister Gloria. They are the best; nothing like what is commercially prepared! I actually like to eat these as a side salad with a meal.

All the gherkin pickles that I have eaten are also way too sweet; however this is not why they got their name. They are actually supposed to be made from the small “gherkin” cucumber. To obtain the desired flavor, the cucumbers should not be over 1 ½ inches long.

These traditional brine pickles were naturally fermented in brine which makes them grow sour. Mom or Dad would put the cucumbers in those big old time crocks; then they made this solution (without vinegar) and poured over the cucumbers. The cucumbers were weighted down with a board and heavy stones. After several days“gross” foam appeared on the top which they would remove. Anyway to shorten the story, eventually our local grocery began to get in those big barrels of dill pickle recipes. I am sure you have seen them. Those pickles I love! 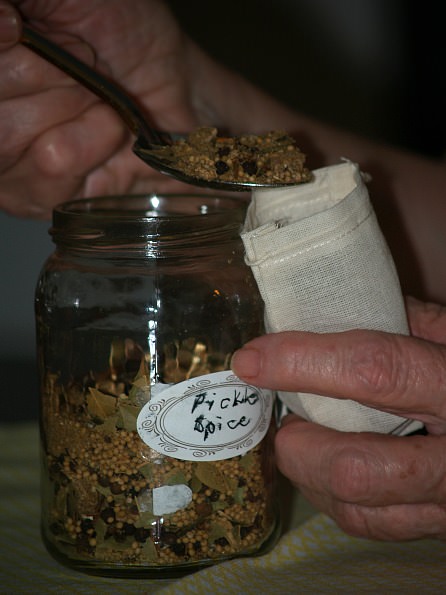 Combine and blend all ingredients; store in an airtight container. 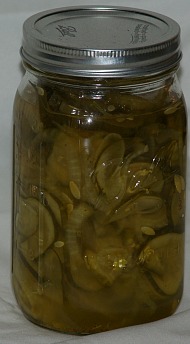 NEXT DAY; Drain liquid from cucumbers and reheat. Pour over cucumbers again and let set 24 hours.

NEXT DAY: Drain liquid from cucumbers and bring to a boil. Pack cucumbers in hot sterile jars. Pour boiling liquid over cucumbers and seal jars tightly.

The grape leaves in the following recipe are optional, but they will add to the crispness of this pickle recipe.

Wash cucumbers and pack in 7 hot sterilized quart jars. To each jar add a little garlic, a little red pepper, a little alum and a little dill.


Combine in a kettle the vinegar, salt and water; bring to a boil and boil for ten minutes. Pour over cucumbers in the jars, add a grape leaf on the top and seal jars tightly.

Some of the sweet pickle recipes are canned in chunks or whole pickles. These are good eaten as a snack or I like to cut them up and use in many of my salad recipes.

Wash cucumbers and dry; place in a stone crock or stainless steel container.

Add salt and vinegar to 2 quarts water; bring to a boil and cool.

Pour over cucumbers and cover with a plate or glass pie plate; place weight on plate to hold cucumbers under brine.

Let cucumbers stand in a cool place for 2 weeks; if scum forms remove it each day.

Tie spices in cheesecloth and add to remaining ingredients; bring to a boil and pour over cucumbers; let stand 24 hours.

This is one of the pickle recipes which is a little different with the distinct flavor of the additional mustard. Like mustard relish, this is a big hit to many people who love the flavor of mustard.

Add mixture to vinegar and cucumber mixture; bring to a boil stirring until pickles are heated thoroughly.

Can in hot sterile jars and seal immediately; makes about 9 pints.