How to Make Potato Bread Recipe

I just could not wait to learn how to make a potato bread recipe. I love this type of bread and I have not tasted any bad ones. They can be made in the form of a loaf bread, rolls, biscuits, scones or donuts. It doesn’t matter what kind of recipe, the potatoes always add moistness and flavor.

When I learned how to make potato bread recipes I was not at all surprised at the wonderful flavor and texture. I have even found the recipes of cakes, candy and cookies with potatoes in the ingredients are also very tasty. The addition of potatoes in these recipes can be in the form of dehydrated ones like the instant potatoes, they can be grated but I find most of the time they are mashed before adding; some recipes are for sweet potatoes. 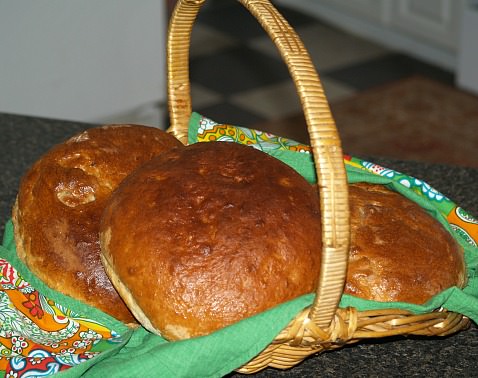 How to Make Potato Bread Recipe

In trying to track who was the first at learning how to make potato bread recipes, I found they came about as a necessity. As with many of our old recipes, they were developed out of the available supply of ingredients or shortages. With the beginning of the potato bread recipes, many countries like Ireland, Scotland and Poland were growing large crops of potatoes. Where ever large crops are grown, the people will find a way to use it; even some might seem strange.

In the beginning of the potato bread recipe, the potatoes became a substitute for a portion of the flour. At that time there was a shortage in wheat making it necessary to stretch the wheat flour any way they could. Whatever the truth of the story is, I am pleased with the outcome. I can’t say I would have thought to put potatoes in these breads before I tasted them. These potato bread recipes are delicious!

HOW TO MAKE POTATO BREAD RECIPE
or REFRIGERATOR ROLLS 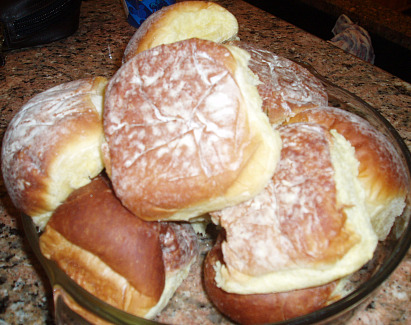 Dissolve yeast in the warm water.

Scald the milk, set off of heat and then add the shortening to melt. Let cool to warm. Add beaten eggs, sugar, salt, instant potatoes and yeast mixture. Stir in 4 cups of the sifted flour. Put remaining flour on board or table and dump dough onto the floured board. Knead in enough flour until dough is smooth and elastic. Place dough in a large greased bowl and cover with a clean wet cloth. Place in the refrigerator for 24 hours. It will rise a little.

Shape the potato bread into rolls. (allow for rising) Place in a warm place and let rise. Bake until rolls are light brown. 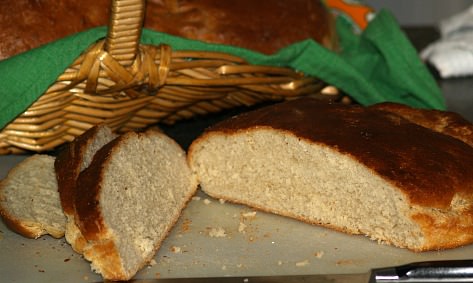 Whip potatoes with butter (nothing else).

Sift 6 cups of flour with salt into bowl; cut mashed potatoes into flour mixture and salt.

Knead until blended and smooth adding enough of the remaining flour as needed.

Place dough into greased bowl turning to coat; cover and let rise until double about 1 hour in a warm place.

Punch dough down; divide in half and shaped into 2 round loaves.

PREHEAT OVEN TO 375 F DEGREES; bake about 45 minutes or until light brown.

Makes 2 loaves but sometimes I double the recipe. 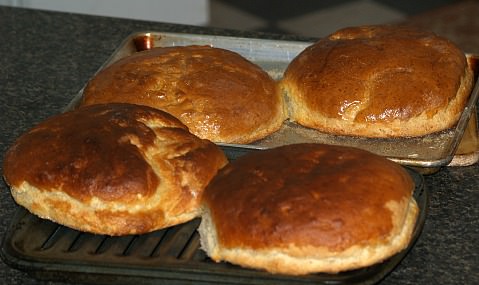 Scald milk; dissolve yeast in warm water.
Add 1 tablespoon sugar to water and yeast; let stand for 5 minutes.
When milk has cooled to lukewarm pour in large bowl and beat in 2 cups flour to smooth batter.
Add yeast and let rise in warm place for 20 minutes.
Add eggs to warm mashed potatoes; add melted shortening and whip until very smooth.
(Potato mixture must be warm); add to batter and mix well.
Add cinnamon and salt to remaining flour; add to batter mixture.
Mix and knead to a smooth dough; let rise and knead down.
Roll out to ½ inch thickness and cut with donut cutter.
Cover and let rise; drop into hot oil 350F degrees and fry 3 to 4 minutes until golden brown.
Drain on paper towels; sprinkle with remaining sugar.

Stir in nuts and raisins; pour into 2 prepared pans.

Bake 50 to 60 minutes or until pick comes out clean; cool 5 minutes and remove from pans.

In a saucepan bring water and potato to a boil; cook until potato is tender.

Set saucepan off to cool to a temperature about 110F degrees.

Add to saucepan honey, butter, salt and yeast; stir and let stand about 5 to 10 minutes until foamy.

Sift flour in a large bowl and stir in cornmeal; make a well in the center.

Add potato mixture to the bowl in the well; stir flour mixture into the yeast mixture.

Turn dough out on floured surface and knead until smooth and elastic about 15 minutes.

Place dough in a greased bowl turning to coat ball; cover with plastic wrap and towel.

Set bowl in a warm place and let rise until doubled in bulk about 1 hour.

NOTE: If my kitchen is cold, I turn the oven on and let the bowl set on top or near the stove to rise.

Punch down dough and knead 3 to 4 minutes; divide dough in half and place in 2 greased loaf pans.

Let dough rise again in warm place about 50 minutes until about 1 inch above rim of pans.

Remove loaves from pans and brush each with extra butter; cool before slicing.

Combine in a large bowl 2 cups of potatoes, flour, butter (or bacon grease) and salt.

Divide dough into 8 parts and cover; heat griddle or skillet over high heat until drop of water bubbles.

Cook about 1 minute on each side (will have brown flecks on surface).

Serve immediately spread with butter; if not using immediately, wrap each in plastic wrap.