How to Make Potato Salad Recipes

When you learn how to make a potato salad recipe, you will see that it can be made with any kind of a potato; it just depends on your taste. There are basically seven types of potatoes; these are russet, red, white, yellow, purple, fingerling and petite. The sweet potato is only a very distant relative so I am not including those.

My mom use to say, “Give me a bunch of potatoes and I will make a meal”; many times she did just that.  Very often we would eat a large bowl of potato salad for a meal; it was so filling; who needs anything else. Some of these recipes have ham, bacon, a variety of vegetables and other ingredients which make up for a whole meal.

The RUSSET POTATO is large and dark; ideal for baking but is also good for mashing, frying or anything. This is the type which I always keep on hand for everything. They are white and fleshy making great baked stuffed potatoes but I find them excellent to make a creamy mashed recipe. This is frequently called Irish after its creator or Idaho after the state here in the US where it was created.

RED POTATOES can also be used in potato salads. Years ago where I was working, we would soak this type in Italian dressing overnight before turning them into salad. What flavor!  The most common of this type has a smooth skin and firm white flesh with edible skin. They are often known as “new potatoes” and are especially good steamed and served with butter and parsley.  Quite often I like to oven brown them drizzled with butter and parsley.

WHITE POTATOES are known to be a good mashing potato but also great for your to learn how to make a potato salad recipe or for grilling. They have thin skins and a great texture for mashing but many people claim they bring out a delicious flavor when cooked over hot coals.

If I was going to eliminate a variety, when I learned how to make my potato salad recipes, it would be the YELLOW POTATO. There are claims of this type being one of the healthiest with higher antioxidants and fewer carbohydrates but it is my least favorite. They have a sweeter taste which really turns me off as potatoes.

I cannot imagine using the PURPLE POTATO in a potato salad recipe, mashed potatoes or anything like that. I have never used these but I can only imagine them in a potato dessert; maybe like a pretty purple cake. These are a very popular staple in South America and supposedly are good any way that you would cook other varieties; roasted, boiled, baked or fried; or in salads.

PETITE POTATOES have the same flesh and skin color, texture and shape as their larger relatives but are much smaller like “marbles”.  They are great for potato salad recipes, roasting or fried having a more concentrated flavor. . Their small size allows for the absorption of other delicious flavors in the recipe.

My potato salad recipe always tasted like the potato salad that my sister Gloria made. Neither of us ever used a recipe and we had no idea why ours tasted the same and was different from other potato salad. One day as I watched her prepare her salad, we decided it was because we both used hot potatoes to make it. The potatoes would crumble as we mixed the salad so the flavor would blend quite well. If you use cold potatoes, they usually hold together and are sometimes even hard.

HOW TO MAKE POTATO SALAD RECIPE 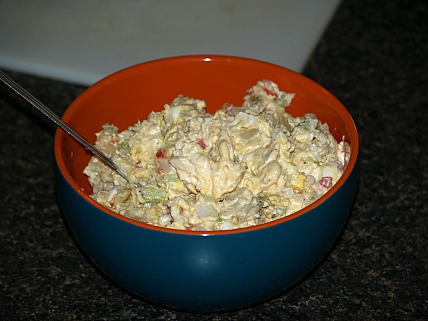 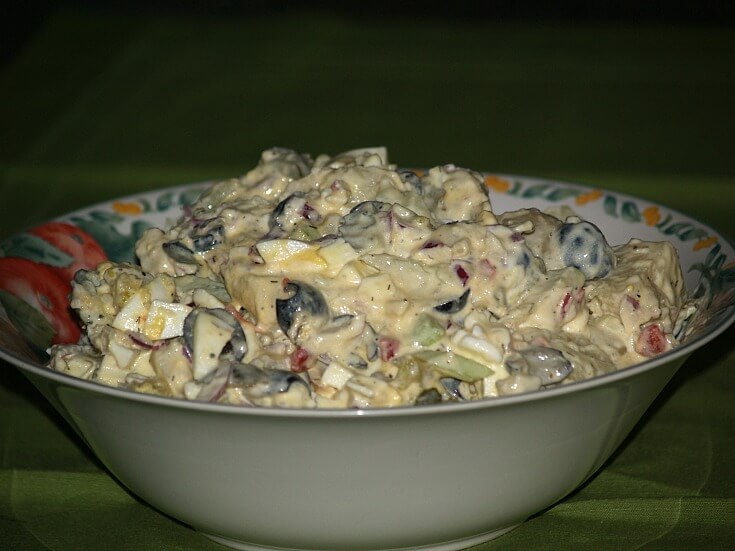 Refrigerate until ready to serve; serves about 12.

This recipe is a good one for picnics. Since it has no mayonnaise or cream, you do not need to worry so much about it spoiling in the heat.

Fry bacon until crisp in a large heavy Dutch oven. Remove bacon from grease; add the onion and sauté until tender. Add the flour, sugar, celery seed, salt and pepper to the grease and onion mixture, stirring to blend. Add water and vinegar and cook for about a minute. Add the bacon and potatoes into the grease mixture and toss lightly to coat. Serve warm.

Combine the oil and vinegar; marinate the cooked potatoes in the oil mixture for 1 hour. Add the eggs, celery, pimento, onion and mayonnaise; mix well.

Slice potatoes in a large bowl.

Combine the vinegar, sugar, paprika, salt and pepper; pour over potatoes, stir and marinate for 45 minutes.

Add sour cream and mayonnaise and mix to blend; cover and chill overnight. 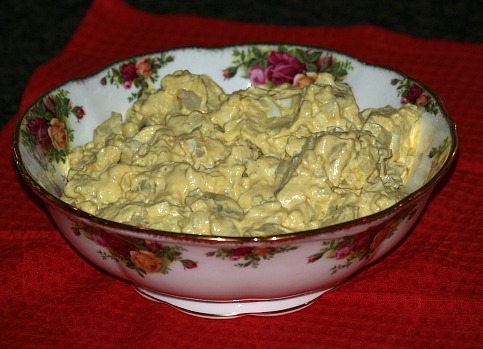