How to Make Potato Soup Recipe

I learned how to make potato soup recipe when I was young. It has always been a part of my life unlike many of the other soups like cheese. My mom would say since I was a child, if she had potatoes, she could make a meal. You may think that sounds like an “exaggeration of words”, but she meant every word; it could be a skillet of fried potatoes and onions, baked potatoes or a variety of soups.

Mom also learned how to make potato soup recipe when she was young.  Quite often Mom would make a large pot of potato soup and that would be all we ate for the meal. Believe me, it was very filling with the heavy cream, butter, potatoes, celery, onion and sometimes with a variety of other ingredients. Potatoes by themselves make a satisfying meal due to all the starches they contain. Throughout the decades they have been used as an economical filler food in meals; more important is that they taste so good.

Soups have been around since ancient times so it seems natural as countries started producing potatoes that they would also be used to make soup. Cooks of these countries learned how to make potato soup recipes even though they may be called by other names but still include potatoes. These recipes like vegetable and others would not taste the same without the heartiness of the potato.

Underground vegetables, roots and tubers, as are potatoes, bring to you rich solid nourishment long after the green leaves are gone. After harvesting the potato is cured by drying for long term storage. They are usually left in the fields for the skins to toughen making them easy to ship and store and readily available to us through the winter months.

I cannot say I have a favorite potato soup recipe; I have never eaten any which I would not consider good.  Sometimes I enjoy a simple bowl of basic potato soup. This doesn’t mean tasteless; it always should be seasoned well. Seasoning can be done with salt, pepper and spices as well as by adding canned soup like cream of chicken. When serving it alone as a lunch meal, I usually add grated cheese and crisp bacon pieces. You can adjust a potato soup recipe to please all your taste buds.

NOTE: An old time tip when making potato soup is for cutting the potatoes. For releasing the most starch into potato stews and soups insert the knife into the potato and work it like a wedge prying off pieces of the potato. This leaves more edges exposed where the starch can escape when cooked. Starch makes the soup creamier and thicker.

HOW TO MAKE POTATO SOUP RECIPE with CREAM 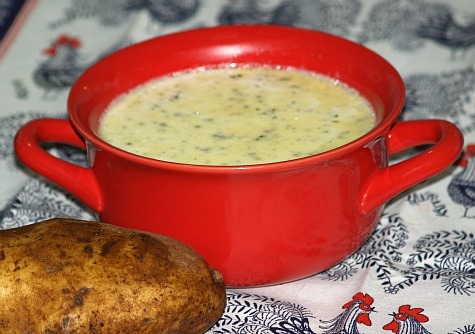 How to Make Potato Soup Recipe with Cream

Melt butter in a heavy cooking pan. Add the onion, celery, parsley and chives. Cook on medium for 5 minutes. Add the potatoes and water. Cover with a lid and simmer until the potatoes are very tender. With a pastry cutter or masher, break the potatoes into very small pieces. Add the cream and stir. Heat just to boiling point (do not cover). Salt and pepper to taste. To serve top with paprika and grated cheese.

In a large kettle cook potatoes, carrots, celery and onion covered with water until tender.

Combine the cheese mixture with the hot vegetables and heat thoroughly; serve immediately.

The following potato soup is a Swiss version where they also grow a lot of potatoes.

Add potatoes and chicken broth and bring to a boil; lower heat and simmer uncovered for 40 minutes.

Pour a little of the mixture at a time into a blender and blend until smooth.

When all has been blended pour back into Dutch oven; add cheese and heat until cheese has melted. DO NOT BOIL.

This potato soup recipe is like a steak entree in a soup.

Melt butter in saucepan; brown meat.
Add onion and cook until transparent; stir in remaining ingredients except for flour and milk.
Cover and cook over low heat until vegetables are tender about 20 to 25 minutes.
Combine flour with 1 cup milk until smooth; stir into soup mixture and boil a minute or so.
Add remaining milk; heat and stir frequently. DO NOT BOIL.

Cook salt pork in skillet over low heat for 5 minutes; add onions and cook 3 minutes longer.
Drain removing as much fat as possible; add water and potatoes.
Season with salt and pepper; cook until potatoes are tender.
Cut corn off the cob; add corn and half and half to potato mixture.
Heat to boiling; remove from heat and sprinkle with parsley.

This is an elegant potato soup recipe.

Sauté leeks and onion in butter in saucepan until tender
Add potatoes, bouillon cubes and boiling water to saucepan; boil for 1 ½ hours.
Press mixture through a fine sieve; allow puree to cool and blend in 1 cup cream.
Sprinkle with a little nutmeg; cover  and refrigerated mixture overnight.
Before serving beat refrigerated mixture with beaters for 1 to 2 minutes.
Strain mixture; combine and blend other 1 cup of cream with mixture.
Serve in chilled bowls sprinkled with chives.