How to Make Pumpkin Cake Recipes

I just had to learn how to make pumpkin cake recipes once I tried this cake. I received a telephone call early one morning last week. It was my brother up in Ohio. Our niece, Diane had just called him. She is Sister Dorothy’s daughter and a few years older than me. (This does happen when you come from a large family.) Dorothy was one of my older sisters and Diane is her oldest child; I was the youngest of my siblings so Diane was a few years old when I was born.

Anyway back to learning how to make pumpkin cake recipes and the story. It seems everyone is in the mood for making Fall cakes; Halloween cakes or Thanksgiving cakes or just something for the season. Diane was searching for my Sister Gloria’s (her Aunt Gloria’s) pumpkin orange cake recipe which she made more than fifty years ago. My brother called to see if I knew anything about her recipe. He went on to describe this cake as Diane remembered it; contained orange juice and frosted with buttercream frosting recipe and so delicious.

I certainly did not remember this! My sister Shirley learned how to make pumpkin cake recipes like sister Gloria’s but it does not have orange in it. Beside that as I told my brother, most pumpkin cake recipes are made with oil so I wouldn’t think our sister would add orange juice; it would make it too runny. Most everyone puts cream cheese frosting on these cakes, but thinking back past fifty years, we never used cream cheese. It was too expensive!

I was really beginning to think that Diane was dreaming about this cake recipe but with my curiosity when it comes to recipes always gets the best of me. I reminded my brother that I had all of Gloria’s recipes, notes and everything pertaining to food. She made sure I took them before she passed away. These are my treasures! Anyway, I said I would begin a search and if she made it, I would have it! Sure enough, in all the hand written notes, there it was! I couldn’t wait to try it!

Also among my treasures were all kinds of decorations to use when baking. It seemed so appropriate to use her decorations on this cake made from her recipe.

HOW TO MAKE PUMPKIN CAKE RECIPE 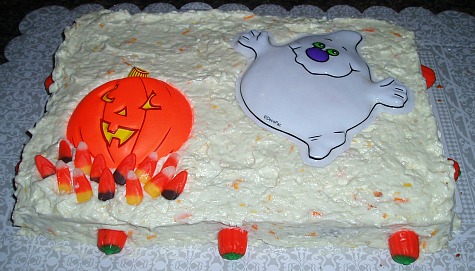 How to Make Pumpkin Cake Recipe

Grease and flour 9 X 13 inch cake baking pan. (If you are going to remove cake from pan before frosting, line with wax paper.)

Cream together butter and sugar; add eggs beating after each.

Pour batter into prepared pan and bake 35 minutes or until pick inserted in center comes out clean.

Remove cake from oven and cool completely before frosting (If removing from pan, do so after 10 minutes out of oven.)

Combine salt and flour in saucepan; gradually add milk while stirring to blend.

Cook mixture until thick; then cool.

Combine and cream the butter and sugar in a mixing bowl; add vanilla, grated orange peel and cooled mixture.

Beat mixture until light and fluffy; fold in coconut and frost cake.

NOTE: This cake is nice when decorated for Halloween or Thanksgiving. 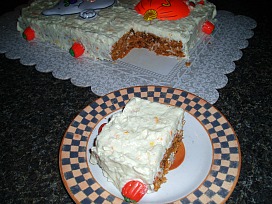 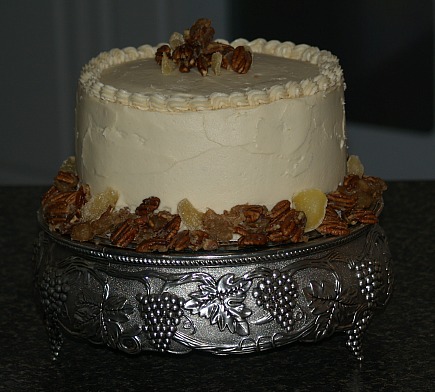 This is one of the pumpkin cake recipes in my collection which is large and delicious but also makes a special presentation for an important occasion.

Cook clarified butter in a saucepan over medium heat until it turns slightly brown; set off heat.

Cream together butter and both sugars; add eggs one at a time beating after each.

Bake 30 to 35 minutes or until pick comes out clean.

This frosting goes well with many pumpkin cake recipes.

Cook butter over medium heat until it begins to turn slightly brown; set off to cool.

Cream butter and cream cheese; beat in brown sugar.
Beat in enough powdered sugar for consistency in spreading.
Spread between layers and on top; garnish with prepared pecans.

NOTE: This frosting is soft because of all the butter and cream cheese; the flavor is delicious.

This topping can be used for any pumpkin cake recipes as a pretty and tasty garnish. I sometimes add slices of crystallized ginger also.

Melt butter in a heavy skillet; stir in sugar until melted.
Stir in pecans and ginger and toss until coated.
Turn out on buttered tray and cool; arrange on top of cake.

NOTE: I make these pecans the day before and refrigerate until I am ready to use. 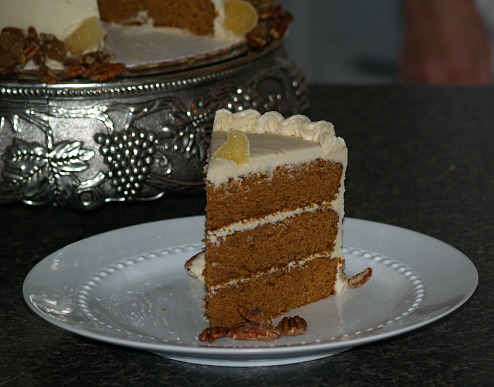 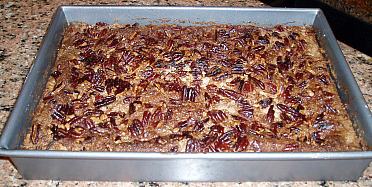 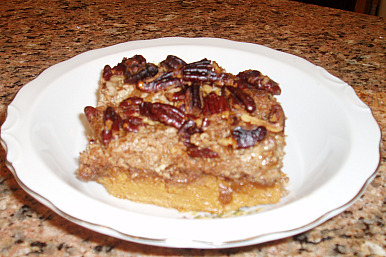 Spread the dry cake mix over the top of the pumpkin mixture. Top this with as many nuts as you like. (I used 3 cups broken pecans). Drizzle the melted butter over the top. Bake for 1 hour.