How to Make Pumpkin Soup Recipe

When you learn how to make pumpkin soup recipe you will know that it can be made from any of the large variety of pumpkins. They vary greatly in shape and size. They might be big and round or they could be more oblong. The colors also vary greatly from the more familiar bright orange to different shades of orange, different shades of green, yellow, brown, Red, grey or white. They might be as small as a few pounds or some of the extreme ones have weighed in around 40 to 50 pounds; there are still unique ones recorded over a thousand pounds.

There are so many different types of pumpkins but all are not always found in the same areas. I have found different ones grown in Ohio than what are grown throughout the south. Many other varieties are grown throughout Central and South America. Also, sometimes I find it difficult to distinguish between the pumpkins and other winter squash. When you get away from “the orange pumpkin” into the many other colors they all look alike and they all belong to the same family. The following are just a few:

If you are learning how to make pumpkin soup recipe with canned pumpkin then it is likely you will be using the sugar pumpkins; most are grown and canned in Illinois here in the United States. I like different types for the desserts than I do for recipes like soup; that is just my preference. Ones like the sugar pumpkin or candy roasters are sweeter and delicious to make desserts like pumpkin pie. Some of the other ones are not sweet at all and taste more like the squash which are from the same family.

When I learned how to make pumpkin soup recipes I learned that I preferred the ones which are served hot over the ones served cold; again that is a matter of personal preference. I am use to having pumpkins in the fall of the year which is harvest time. This is usually when the temperatures are turning cold and a hot bowl of pumpkin soup is so warming on a chilly day. Many different herbs and spices blend so well with the mild delicious flavor of pumpkin which enables us to vary the basic pumpkin recipes.

HOW TO MAKE PUMPKIN SOUP

This pumpkin soup is delightfully flavored with all the spices which go so well with pumpkin; cinnamon, allspice and nutmeg.

Blend all ingredients thoroughly in a heavy saucepan. Heat soup on medium heat until hot but do not boil. Ladle into bowls, sprinkle with a little nutmeg and serve immediately.

This is one of the pumpkin soup recipes which is typically served cold. Although it has a good flavor when serving cold, I still prefer it hot but that is up to you.

Sauté onion and leek in butter until yellow; add potato, ham and broth and bring to a boil.

Reduce heat, cover and simmer until potato is tender about 15 to 20 minutes.

Remove from heat and add salt, pepper and sugar; process through blender and return to pot.

Add cream and canned pumpkin; return to heat stirring to blend. (Heat until hot but do not boil- this will enhance flavor)

Remove from heat and chill until cold. Serve cold. (Some like it hot) 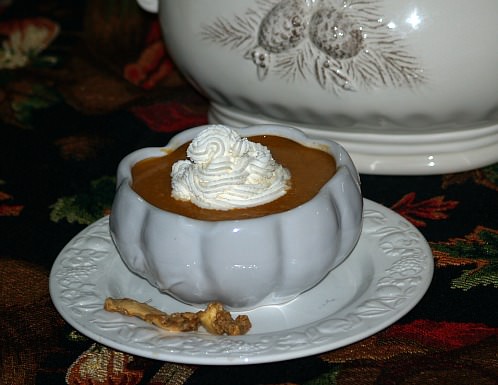 This pumpkin soup recipe is a blend of pumpkin and corn soup delectably flavored with ginger and lime. What a blend!

Combine corn and water in saucepan and bring to a boil; simmer 10 minutes.
Pour into processor or blender and process until smooth; strain and discard pulp.
Combine corn, garlic, salt, pepper and chicken broth in Dutch over; bring to a boil.
Reduce heat to low and stir in pumpkin; simmer 10 minutes stirring constantly and set off heat.
Combine lime juice and ginger in small saucepan; cook over medium heat 2 minutes.
Remove from heat and pour through a wire strainer into small bowl; discard pulp.
Add grated lime peel and whipping cream to juice mixture; beat on medium speed with mixer until soft peaks form.
Spoon soup into serving bowls; top with spoon of ginger lime mixture.

This pumpkin soup recipe has a thicker texture with the added corn.

Bring mixture to a boil; reduce heat and simmer 5 minutes.

Stir in half and half; when ready TO SERVE heat below boiling and SERVE IMMEDIATELY.

Cut top off pumpkin; scrape out and discard the seeds and stringy part.

Sauté onions in melted butter in a large pot until tender but not brown.

Puree the mixture in a food processor; return to the pot.

Add the milk and season to taste.

BEFORE SERVING heat just below boiling and add basil; ladle into bowls.