How to Make Seafood Chowder Recipes

When I learned how to make a seafood chowder recipe I found it can be made up with a broth and a range of ingredients from a few to very many. These ingredients combine to give the soup its characteristic flavor; this is why almost no two recipes will taste the same. These pots of soups are bulky nourishing recipes which can be served as main course dishes.

I learned how to make a hearty seafood chowder recipe which can be made with only one, such as clams, or combinations of seafood and also fish depending on our taste. It is often seasoned with salt pork, bacon or chicken. Another common ingredient found in chowders is the potato. Depending on what area of the United States you are in, or even in other countries, you will find different ingredients added to this kind of soup. There might be onions, leeks, garlic or even a variety of other vegetables added to the recipes.

When you learn how to make a seafood chowder recipe, remember that different ingredients all cook in different time periods. Any type of soup which includes different seafood, different meats or different vegetables you must consider the cooking time for each. For this reason they may need to be cooked in stages or some must be precooked.

When I first tried to make a seafood chowder recipe, I started with a simple basic one. Each time I made it, I would try different ingredients in the pot to see how I liked the taste. Finally I got my recipe down to the one which I generally make; it is usually for Thanksgiving.

HOW TO MAKE SEAFOOD CHOWDER RECIPE 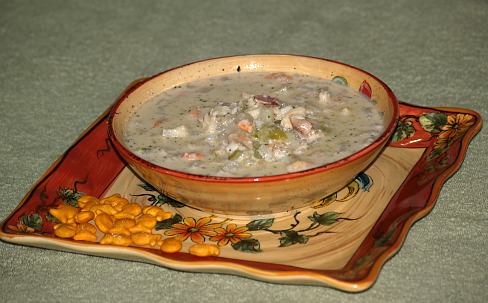 How to Make Seafood Chowder Recipes

To convert this recipe to a tomato base substitute the cream with 2 cups tomato juice. You can also sauté’ ½ cup chopped green pepper with the vegetables. For more flavor add ¼ teaspoon thyme and a dash of cayenne pepper.

The following recipe is made easy using several canned items it is one of the easier seafood chowder recipes.

Remove skin and bones from salmon.

Sauté onion and celery in the butter until tender.

Add remaining ingredients and heat just to a boil; DO NOT BOIL.

When it comes to seafood chowder recipe, the most common question I am asked is how to make clam chowder. This seems to be the most popular recipe but for some reason many are afraid to try to make it. It really is easy and the best way to learn is to “dive in and just do it”.

Put sliced potatoes in bowl of cold water; fry diced salt pork in skillet until crisp.
Drain potatoes and add to skillet; fry until tender but not brown.
Arrange a layer of scallops and cod in heavy saucepan; add a layer of potatoes, onions and salt pork.
Season with salt and pepper; continue to layer until all are used.
Pour the 1 ½ cups cold water over the top.
Bring to boil, cover and simmer 10 minutes or until potatoes are tender.
In another skillet melt butter; blend in flour.
Stir in milk; cook and stir until mixture boils.
Add to chowder stirring constantly; check the seasoning and serve hot.