How to Make Best Soup Recipes

When I learn how to make my best soup recipes and stews, I found that some of these are the oldest forms of cooking. Many centuries ago European peasants were living on one dish meals of meat and vegetables cooked together.

Fishermen’s wives made chowder and bouillabaisse from their share of the catch spared for home consumption. Gypsy cooks threw into a pot whatever the countryside had to offer. It is one way of cooking that most of us would not want to do without. Some of these wives learned how to make the best soup recipes out of the wild game or fish and with the addition of wild rice. Some of these recipes are still recorded and popular today in our history.


If you are learning how to make soup recipes today you will find they are valued for their taste and aroma but also for the vitamins and minerals that they contain. Homemade soup rates high among the most nourishing, delicious and economical of all foods. It makes an excellent appetizer or served with crusty bread, an ideal lunch or supper. Nothing taste so good and makes you feel so much better than a bowl of chicken noodle soup when you have a cold. Nothing warms you up so quickly on a cold day like a bowl of hot soup recipes.

Thin, light, savory clear soups give an edge to the appetite. They were designed to precede elaborate formal dinners. Their purpose is different and thin soups can never replace the hardy chowders, stews and other soups of substance.

Very popular homemade soup recipes today are the cream soups, made with milk or heavy creams with the addition of vegetables or fish. These are seasoned and always thickened. Bisques are generally made from shell fish, milk and seasonings and served with diced fish; made similar to purees.

SOUP TERMS: The following are some soup terms to help in the making of your homemade soup recipes. 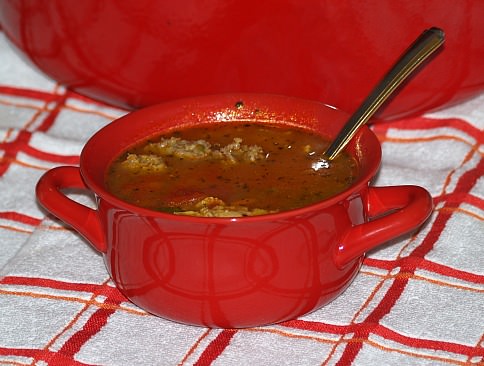 How to Make Best Soup Recipes like this Beef, Sausage and Barley Soup Recipe

Add the can of tomatoes; when mixture begins to boil add the barley.

Reduce heat, cover and simmer about 45 to 50 minutes.

Season with salt and pepper as desired; serve hot.

This homemade soup recipe comes from the Tamil people of East India. The word meaning “pepper water” is deliciously seasoned with many spices besides the pepper; turmeric, ginger, garlic, ginger, coriander and cumin.

Combine 4 teaspoons chopped onion, turmeric, cayenne pepper, ginger, garlic, coriander, cumin.
Pound ingredients together to make a curry seasoning paste and set aside.
Brown onion slices and chicken pieces in large saucepan in 4 tablespoons melted butter.
Stir in the curry seasoning paste, yogurt and a little salt.
Cook until juices turn to a brownish crust on bottom of pan; watch so it does not burn.
Pour in water and let cook over low heat.
Melt remaining butter in a small pan with whole cloves for a couple minutes.
Crush the cloves with a wooden spoon; pour in the lemon juice and mix well.
Pour this mixture into the large pan with the chicken.
Cover and stew the chicken soup for 1 hour or until the meat is very tender.
Remove meat from bones and return meat to pan; discard bones.
Adjust the seasoning to taste; serve with a bowl of hot cooked rice and bowl of chopped apples.