How to Make Spinach Salad Recipes

I learned how to make a spinach salad recipe only in the last half of my life making it a part of my diet. Dad did not grow spinach in our garden; I guess it didn’t grow in our soil as well as the different lettuces. Because Dad had so many of us to feed, he always grew a lot of each vegetable that adapted to our soil well; corn, green beans, tomatoes, cucumbers, lettuces, etc. We had to have lots of these because Mom and Dad would can them to last all year.

The extent of spinach in my diet came from cans in the school lunchroom; they did not know how to make spinach salad recipes. This leafy green is a good source for vitamins and minerals like Vitamins A, C, E, K, magnesium, foliate, iron and others. Although this dark green vegetable is obviously very healthy, for years in commercials it has been over exaggerated by “Popeye the Sailor Man”.

For this reason, canned spinach became a regular ingredient in the school lunchrooms. Believe me, it tasted nothing like our delicious flavorful fresh spinach as when I learned how to make spinach salad recipes. The small bowls were more like bland tasting mushy weeds; a far cry even from my delicious cooked spinach.

I looked through my old German recipes and found a few with the title of “spinach salads” but none are fresh spinach. Instead they use fresh spinach but wilt it in a pan usually with hot bacon drippings. This is how Mom always did the leaf lettuce which Dad grew in the garden. She called it “wilted lettuce”; the dressing had beaten eggs, milk, bacon and bacon drippings in it. It was so good!  If had grown spinach, I know this is how Mom would have prepared it.

About thirty years ago, I started mixing fresh spinach in my salad bowls to add color to the mix. I did this to add to the presentation not realizing how great a salad could be when using only spinach in the bowl. I ordered  a spinach salad recipe in one of the restaurants with hot bacon dressing and thought that was the best salad I ever ate; I began making my own at home. The love for this salad spread rapidly across the United States; almost every restaurant created their unique spinach salads. 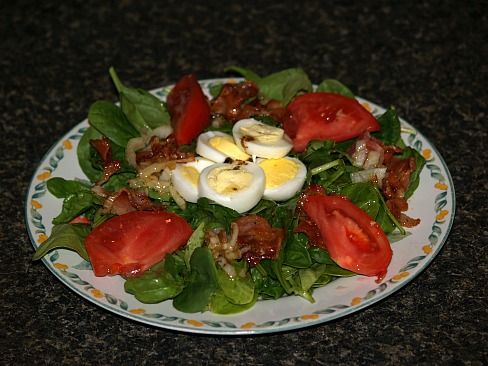 How to Make Spinach Salad Recipe with Hot Bacon Dressing


Line six chilled salad bowls with part of the spinach.

Divide shrimp and Top each salad.

Remove pit from avocado and add slice to each salad.

Combine all ingredients in a jar with a screw on lid; Shake well to blend and store in refrigerator.

Mix all ingredients and blend well.


Blend together the mayonnaise, chili sauce, horseradish and onion. Fold in the crabmeat and serve over spinach salad. 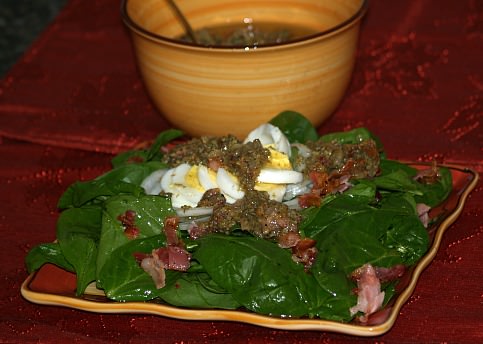