The “true” sponge cake recipe has no chemical leavening agent such as baking powder, baking soda or yeast in the ingredients. It also does not have any shortening in the cake. They do contain eggs, both the yolks and whites and usually a lot of eggs. The lift given to these cakes comes from the beating of the eggs which is very precise. The whites must be separated from the yolks when cold and heated to room temperature before beating. First it is easier to separate the eggs while cold. This helps to prevent the fat of the yolk from getting into the whites.

As you know, a drop of yolk in egg whites will prevent beating to reach the full volume. This is really important when no leavening is being added to the recipe as in making sponge cakes. Although it is important to thoroughly beat the yolks adding lots of air to them, It is the beating whites which really gives the cake a lift and both the yolks and whites beat to a fuller volume when a little warmer.  After gently combining the beaten whites into the yolks and other ingredients, the hot oven will cause the cake to expand sometimes as much as three times its volume.

When baking a sponge cake recipe follow the instructions on your recipe. My old recipes instruct baking in ungreased cake pans and inverting after baking until cold. The contents can cling to the sides of the pan holding the air in the cake (Preventing collapse) until cold. I have noticed newer recipes instructing the baker to grease and flour the pan. I have also notices that many of these recipes include a chemical leavening in the ingredients which is not a true sponge cake recipe. This is why you must follow your recipe closely.

Today, a lot of people consider a sponge cake recipe to be plain and without flavor. Usually they are not real sweet but a dusting of powder sugar or frosting can change that quite easily. Also by adding a little lemon, orange or other flavoring makes a delicious cake. Because of the simplicity of these cake recipes, they are perfect for making elaborate dessert recipes like cake rolls (Log cakes), trifles, Bavarian cream desserts, gateau and others. You may be familiar with the very common dessert sponge cakes called lady fingers. I use lady fingers in many recipes but usually cannot purchase them any longer in bakeries so I end up making a lot of these.

NOTE: To loosen cold cakes from pan run a long thin knife around the edge to loosen.

HOW TO MAKE SPONGE CAKE RECIPE 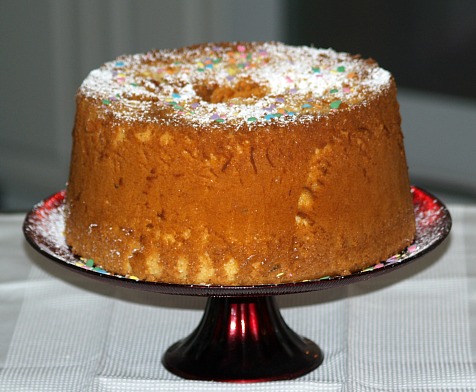 How to make Sponge Cake Recipe

Beat the yolks in a separate bowl; add the honey, lemon rind, vanilla, and remaining sugar.

Beat mixture until thick and light in color.

Gently fold yolk mixture into the whites; fold in the flour.

Turn into an ungreased tube cake pan and bake for 65 minutes (or until pick comes out clean) on bottom shelf.

Remove from oven and invert cake on the neck of a glass bottle to cool completely.

When cold remove cake from pan. 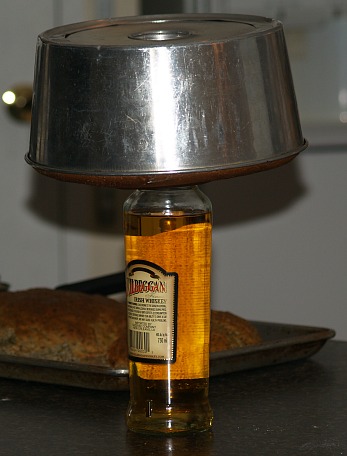 Cake Cooling Upside Down on a Glass Bottle 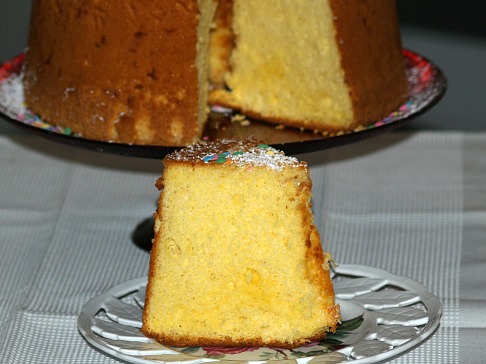 Like the sponge cake the chiffon cake has many eggs.

Beat the egg whites in a large mixing bowl until foamy. Add the cream of tartar and beat until stiff peaks form. In another bowl sift together the flour, sugar, baking powder and salt. Make a well in the center and add the oil, egg yolks, water, milk, vanilla and lemon rind. Beat until smooth and well blended. Pour egg yolk mixture gradually over the whites and gently fold in until blended. Pour into an ungreased tube pan. Bake for 1 hour and 20 minutes. Remove from oven and invert cake pan to cool.

Notice how this recipe is written; it is typical of many old time recipes.

Sift flour and salt together 4-6 times.

With clean beaters beat the egg whites until foamy.

Fold the egg yolk mixture into the beaten whites.

Sift ONE FOURTH of flour mixture at a time over egg mixture; fold in

The sponge cake is thought to be the oldest of the non yeast cakes made. If looking through old cook books, you can find them dating back to the sixteen hundreds. This is one of my very old recipes and you could make any size you want.

Sugar: Use the weight of the eggs in sugar.

Flour: Use half the weight of eggs in flour.

Vinegar: (According to the quantity- about 1 tablespoon to 8 eggs)

Beat yolks thoroughly then slowly put in the sugar; beat until thick.

Beat egg whites stiff; fold into the yolks and sugar.

Fold in lightly the flour and a little vinegar.

Beat the egg whites, cream of tartar, and salt on high until soft peaks form.

Beat the yolks in a separate bowl until well blended.

Beat mixture until thick and light in color.

Gently fold yolk mixture into the whites; fold in the flour.

Bake for 65 minutes (or until pick comes out clean) on bottom shelf.

Remove from oven and invert cake on the neck of a glass bottle.

Beat yolks and sugar until thick and pale color.

Bake for 45 minutes; invert in pan and cool completely.

Beat the egg yolks with sugar and vanilla until thick and pale.

Add the sifted flours and fold in.

Fold about ONE FOURTH beaten whites into yolk mixture.

Add remaining whites and fold in; turn into prepared pan.

Bake 50 to 60 minutes until top springs back when lightly touched.

Cool in pan 10 minutes; remove to rack to cool.

FOR CAKE place the egg YOLKS in a large mixing bowl.

Beat on medium speed of mixer gradually adding ½ CUP of the sugar.

Continue beating until thicken and pale in color: beat in lemon peel.

Sift together in another bowl the flour and salt; gradually fold into yolk mixture.

In a clean bowl with clean beaters beat the egg WHITES until foamy.

NOTE: The top should be golden brown and spring back when gently touches.

Allow the cake to cool in the pan; cut into 4 equal parts making 4 layers.

NOTE: To remove parts from the pan gently slide a lift, spatula, etc. under the cake parts.

FOR FILLING melt butter in a saucepan; blend in cornstarch, sugar and salt.

Gradually stir in the milk; bring to a boil over medium heat.

Stir in the vanilla and cool slightly; divide mixture in half.

Stir chocolate into ONE HALF of warm custard; let both halves of custard cool.

TO ASSEMBLE place 1 cake layer on a serving plate; sprinkle with rum.

Spread the layer with the chocolate custard; top with another layer of sponge cake.

Place a layer of sliced fruit over the cake layer; sprinkle with rum.

Add another cake layer and sprinkle with rum; spread with vanilla custard.

Top with the last cake layer and sprinkle with rum.

TO SERVE frost cake with whipped cream and garnish if desired.

Sift the flour and salt together; set aside.

Beat on medium speed until thick and lemon color.

Fold the flour mixture into the beaten yolks.

In a clean bowl with clean beaters beat WHITES until stiff.

Fold egg whites and vanilla into the batter.

Spoon batter into a pastry bag fitted with a large plain round tip.

Dust lightly with powdered sugar; bake about 15 minutes until set.

Sift flour and salt together; set aside.

Beat egg YOLKS in large bowl until thick and pale in color.

Gradually beat in the sugar and extracts; fold in flour mixture.

In a clean bowl with clean beaters beat egg WHITES until foamy;

Fold the yolk mixture into the beaten whites; divide evenly in prepared pans.

Bake 25 to 30 minutes until pick comes out clean.

Cool in pans 10 minutes; remove from pans to rack.

If desired dust with sifted powdered sugar or add a glaze.

Beat the egg YOLKS in a large mixing bowl on high speed of mixer.

Gradually beat in the sugar; continue beating until thick and pale color.

Gradually stir in 3 TABLESPOONS of the cocoa powder and vanilla.

Bake 12 to 15 minutes until pick comes out clean.

Loosen hot cake around the edges with a knife; turn out onto cocoa covered towel.

Peel off paper liner; starting at short end roll cake and towel up together.

Place roll seam side down on wire rack to cool.

Place seam side down on a serving tray and freeze.

To serve set at room temperature 30 minutes; dust with powdered sugar and slice.