How to Cook a St Patricks Day Menu

Many of you want to learn how to cook a St Patricks Day menu in preparation for dinners and parties for the upcoming fun day. Although I am not Irish, I had a very close neighbor woman at one time who gave me many tips of Irish cooking. She pointed out that much of it is similar to my German background, using many of the same ingredients such as potatoes.

When you learn how to cook a St Patricks Day menu, you will find that none is special without Irish potatoes recipes. The versatility of potatoes is evident in Ireland. You might have a colcannon recipe made with mashed potatoes and onions and other ingredients like kale or cabbage and maybe even sausage, thick and creamy potato soups, lamb stew, potato cakes, pancakes and even potato candy; the options are endless for Irish potatoes.

According to history the potato was taken to Ireland from the New World in the 17th century. Because of the cool moist climate there, combined with the fertile soil, the potato thrived and quickly became known as a nutritious important crop of Ireland. The people recognized the potato as a cheap filler food for families which also was very delicious. Everyone planted them and it became a staple of the country.

When I learned how to cook a St Patricks Day menu, I found that it could include entrees of many Irish stew recipes, corned beef and cabbage or bacon and cabbage, roast beef; all cuts of lamb, beef and pork are used as well as the organ meats. Most of the locally grown animal meat is available for cooking. In past years venison was very popular and large outdoor pits were built to cook the meat. Various types of poultry are included in the Irish cuisine. The exception is the poor; they usually depend on milk, eggs, butter and cheese to fill their diets. For this St Patricks Day, I am making lamb chops using local ingredients like butter, heavy cream and Irish whiskey.

Unlike our traditional tossed lettuce salad recipe that we have with every meal, the traditional Irish salad recipe is not tossed or mixed in any way. I am adding this to my St Patricks Day menu. A head of lettuce (Bibb or iceberg) is washed and cored. It is then opened from the middle and placed in a salad bowl just as the leaves are on the head. On top of the lettuce leaves (which would be the center of the head only opened) arrange some watercress, thin slices of beets, cucumbers, small tomatoes and pieces of boiled eggs. Serve this salad with the salad dressing recipe below.

The creamy seafood cocktail sauce recipe makes this a favorite Irish appetizer recipe; especially for those located near the coast where seafood is readily available.

Cleaned and cooked shrimp or other shellfish

Blend together until smooth; serve over any shellfish. Makes 2 ¼ cups.

No St Patricks Day Menu can be complete without Irish bread recipes and Irish soda bread is the most famous. There are hundreds of recipes for this bread, some with dried fruit like raisins or currants and many without. However you choose to make it, it is a delicious bread; crusty on the outside and the buttermilk gives it a great texture on the inside. Serves 6 to 8 people.

Turn dough out onto a well floured surface and knead until smooth and elastic about 5 minutes.

Place on a greased baking sheet; shape dough into a 1 ½ inch thick circle. (About 12 inch round loaf)

Bake at 325F degrees for 1 hour or until bread sound hollow when tapped.

Remove to a rack to cool for about 5 minutes before cutting into wedges.

This salad dressing recipe is for serving over the traditional Irish lettuce salad for the St Patricks Day menu.

In a bowl or glass pitcher add vinegar to cream and stir in; blend in sugar, mustard and mayonnaise until smooth.

Run yolks through sieve and blend in the dressing. 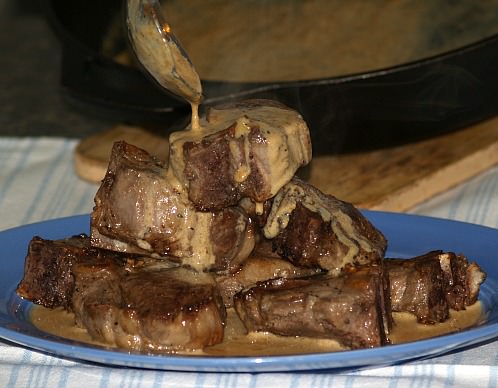 I am using this Gaelic lamb chop recipe as the main recipe for my St Patricks Day menu. Not only is it delicious but it shows the historical rivalry between the Irish and the Scots. The “Gaelic” refers to the dialect of some of the Scots and is still in existence in the highland region. The Irish whiskey used in this recipe displays the competition which still exists between the Irish and Scottish distilleries. The cream sauce in this lamb chop recipe made with the Irish whiskey offers a subtle flavor when spooned over the chops. Makes 4 servings-adjust recipe for more guests.

Sprinkle chops lightly with salt and pepper; brown chops on both side in melted butter.

Remove chops to a heated serving platter and keep warm.

Heat mixture gently (DO NOT BOIL) stirring up bits in the skillet.

Served 4 to 8; lamb chops are small so each may want two chops.

Then add a layer of thinly sliced onions; salt and pepper and dot with butter.

Continue layering until all potatoes and onions have been used.

Place in oven at 350F degrees until browned and potatoes are tender. (About 45 to 50 minutes)

If potatoes get too brown before they are tender lay piece of foil loosely on top. Serves 6 to 8 depending on vegetable size.

NOTE: Make sure pan is deep enough that cream does not boil over.

I am adding more of the local Irish vegetables to my St Patricks Day menu in the form of this congealed salad recipe. These congealed recipes are very popular in many of the other countries, more so than here in the United States. They are very light and tasty. This recipe uses the local carrots, cabbage and spring spinach; and is green with lime gelatin.

Fold carrots into one portion and pour mixture into 9 X 5 X 3 inch loaf pan; chill until set but not firm.

Fold cabbage into second portion of gelatin; pour into pan on top of carrots; chill until set but not firm.

Fold spinach and chives into third portion of gelatin; pour into pan on top; chill until firm.

To serve unmold on platter lined with lettuce leaves; slice in 8 to 10 servings.

I am rounding up my St Patricks Day menu with this delicious dessert; grasshopper pie recipe. I am not sure of its origin but it is GREEN and very delicious. Plus, I know a lot of Irish people love crème de menthe as I do. You won’t be disappointed with this one!

Refrigerate at least 4 hours before serving.