How to Make Sweet Pepper Recipes

Learn how to make Sweet pepper recipes. They might be made with peppers of many colors; green, red, yellow, orange and even purple and other colors. These peppers include the bells peppers and some varieties of the long slender ones. As the name suggest, these are the ones which are mild flavored unlike the “hot” varieties. 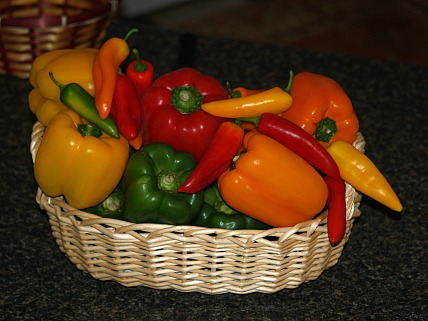 How to Make Sweet Pepper Recipes

Some recipes will call for roasted peppers as an ingredient. This video demonstrates how you roast them.

I grew up only exposed to the sweet green bell peppers (and hot ones) from our garden, however we did not call them bell peppers or sweet peppers. In Ohio we called them “mangoes”!  Where that came from I do not know! When I moved to Florida, I was shocked to be “introduced” to the real mango; a fruit.

I learned how to stuff peppers as a young adult and this has become my favorite way of cooking them. A variety of fillings can change the taste completely. I usually use a meat filling but Mom also learned how to make sweet pepper recipes by stuffing the peppers with a kraut or cabbage filling. 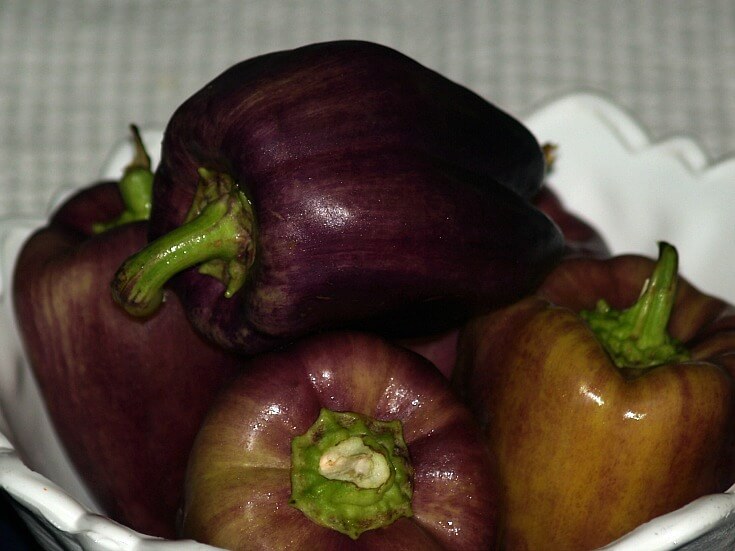 Preheat oven to 375F degrees.
Sauté onions, mushrooms and garlic in melted butter until soft.
Brown beef and sausage in a separate skillet; drain off excess fat.
Combine rice, eggs and cheese in a large bowl; add meat mixture and vegetable mixture and mix well.
Stuff peppers with mixture and place upright in a flat baking pan.
Cover and bake for 1 hour.
NOTE: These can be made ahead, wrapped individually and placed in the freezer for baking later. I prefer to go ahead and bake them and then freeze some for later use. Once baked it does not take as long to heat up for a fast meal.

Unlike the sweet mango flavor, these green bell peppers have a strong grassy flavor and should be very crunchy in texture.  I just happened to come across the pretty red, yellow and orange bell peppers while shopping at Costco many years ago. Before I knew what they tasted like I could not resist learning how to make sweet pepper recipes with all the beautiful colors. 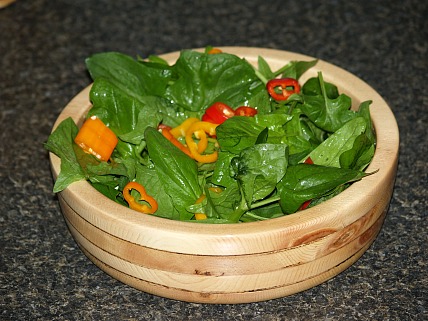 In recent years, I came across the purple bell pepper. They are less sweet than the red, yellow and orange peppers but sweeter than the green bell peppers. All these beautiful colors and various tastes add a lot to flavoring fresh salads and the presentation. The following goat cheese appetizer recipe is a favorite of mine.  This easy appetizer is simple to make and a favorite of mine also as a lunch with chips or crackers. 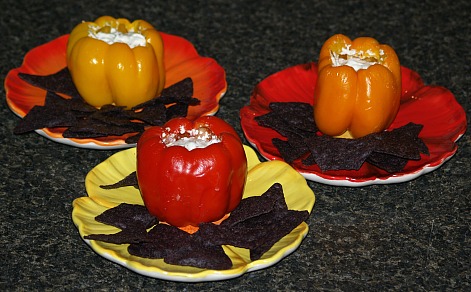 Preheat oven to 375F degrees.
Cut stems from bell peppers and remove seeds.
Crumble goat cheese in a bowl; sprinkle with salt, pepper and garlic powder.
If desired sprinkle with red pepper flakes; mix together with a fork.
Fill prepared bell peppers with cheese mixture; place in a flat baking pan.
Bake about 25 to 30 minutes or until cheese is melted and peppers are hot.

Although the red bell peppers have a slightly stronger flavor than the orange and yellow ones, to me the taste is pretty much the same. I find these to have a milder flavor than the green ones which I grew up with. When I was young, I did not even like these peppers because of the strong taste. After I got older, I learned to love the taste. Many sweet pepper recipes like pizza, spaghetti sauce and chili just would not be the same without these peppers.

Sweet pepper recipes using pimentos are best when the pepper is roasted first.  This one has a high sugar content and the roasting process brings out the wonderful flavor.  There is also a sweet cherry tomato. This one can be a little spicy making you wonder if it truly is a sweet pepper or one of the hotter varieties; anyway it still is very tasty.

Sweet pepper recipes are just as popular in other countries as they are here in the United States. This Yugoslavian recipe can be used as a salad or a delicious appetizer served with small pieces of toast.

Preheat oven to 400F degrees.
Pierce eggplant with a fork in several places; place on baking sheet.
Bake uncovered until tender 40 to 45 minutes; let stand until cool enough to handle.
Cut eggplant into quarters and scoop out and dice pulp discarding the skin.
Place eggplant in a medium size bowl and set aside.
Heat oil in a medium size frying pan over medium heat.
Add the bell pepper and garlic; cook stirring until almost tender 3 to 4 minutes.
Add bell pepper mixture with the oil to the eggplant; mix in lemon juice and parsley.
Season with salt and pepper to taste; cover and refrigerate at least 1 hour to blend flavors.
Serve on lettuce leaves and garnish with onions; 4 to 6 servings.

Preheat oven to 350F degrees.
Cut off tops of peppers and remove seed; simmer peppers in hot water about 5 minutes and drain.
Brown meat and onions in hot fat in a large skillet; add tomatoes, bread crumbs and seasonings.
Blend mixture and stuff the peppers; stand upright in a flat greased baking pan.
Cover and bake peppers for 25 minutes; remove cover from peppers.
Top peppers with grated cheese and bake another 5 to 10 minutes uncovered. Serves 8

This makes a delicious sweet pepper recipe for an entree.

Prepare cornbread according to package directions; cool on wire rack and crumble.

In a large skillet sauté onion, celery, yellow pepper and ham in hot olive oil until vegetables are tender.

Remove from heat and stir in eggs, pecans, ¼ teaspoon salt and ¼ teaspoon pepper.

Place shrimp on a pan and place under broiler until done; about 5 minutes basting with remaining sauce.