How to Make Tuna Salad Recipes

I learned how to make tuna salad recipes when I was young; It was popular around my house when growing up. Tuna came in cans and was very convenient to purchase at the grocery. It was about the only fish that we had access to; occasionally Mom would buy a few fresh perch fillets from the market. Back then canned tuna was very good; much better than it is today.

Tuna is a saltwater fish and since Ohio was so far inland getting fresh tuna just was not a consideration. Years ago we did not have a large selection to choose from but like I said, it was very good. Today, the only kind I purchase is the white albacore canned tuna; albacore is the only tuna which can be legally labeled “white tuna”.  Recently, I picked up a few cans of the “light tuna” by mistake. I felt it was not worth eating; I gave it away for cat food.

When I learned how to make tuna salad recipes I found that the white albacore makes the best. I use to use a mixture of the white and light in casseroles and it was good. Supposedly the “dark lateral blood meat” is separated from the fish to can as pet food but the light that I had recently tasted like that is what it was. I do not know that to be a fact but it did not taste good at all so I now stick with albacore if I cannot get fresh tuna.

If you have access to fresh tuna, this makes the best when learning how to make tuna salad recipes. Unlike the canned fish, tuna steaks are firmer after cooking. Most varieties can be cut into chunks and when other ingredients are added, it can make very delicious salads. The yellowfin is one of these often being marketed in restaurants as the Hawaiian ahi tuna. After grilling and cooling, this has a great taste when mixing with other salad ingredients.

HOW TO MAKE TUNA SALAD RECIPE 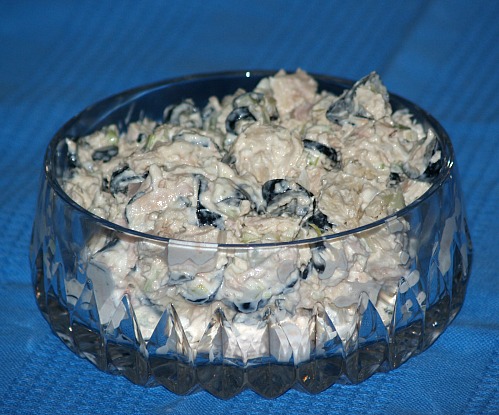 How to Make Tuna Salad Recipe

Drain off any liquid on tuna and break tuna up into small pieces. Combine the tuna with the celery, onion, olives, dressing mix and sour cream. Toss to blend.

The next tuna salad recipe can feed 90 to 100 people if you are cooking for a crowd. This recipe can be served on lettuce leaves as a salad or made into sandwiches using bread or buns. The same ingredients can be used in a small size recipe. Use 1 small can tuna, 1 Stalk chopped celery, 4 sliced olives, 1 boiled chopped egg,3 Tablespoons chopped onion, 1 Tablespoon relish 1 Teaspoon prepared mustard and enough mayonnaise to spread.

TUNA SALAD (Cooking for a crowd)

Have all ingredients chilled. Combine the tuna, celery, onion, olives, eggs, relish and mustard. Mix well to blend. Start adding mayonnaise and stirring to blend until you have desired consistency. Serves about 50. 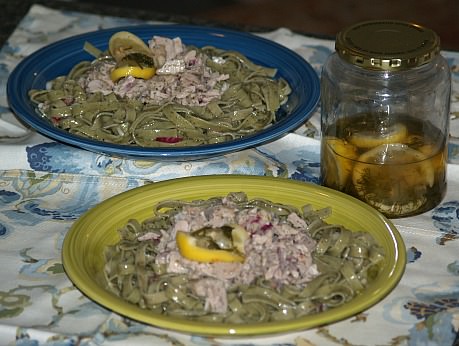 To make sauce whisk together the mustard and 1/2 cup lemon dill vinegar in a small bowl. Dribble in the oil and continue to whisk; add salt and pepper to taste. Set aside.

Arrange fresh tuna in a shallow baking pan and add enough water to half cover fish.

Add 1/4 cup lemon dill vinegar and season with salt and pepper. Bake about 12 minutes or just until done; remove from oven and allow to cool to room temperature.

Cook fettuccine as directed on package.

Drain in a colander and rinse with cold running water; shake off all water and transfer to a bowl.

Add ½ cup of onion and ¼ cup of dill; pour half of lemon dill sauce over the pasta and season with salt and pepper and toss to blend.

Arrange pasta on large serving platter and spoon tuna mixture in the center to serve.

NOTE: If you know how to make herb vinegar the lemon dill vinegar is easy to make. Try the recipe below if you do not have any for this recipe.


Place lemon, dill and salt in a glass bowl. Heat vinegar to very hot but not boiling; pour over the lemon and dill. Let set to cool; strain and pour into a glass jar. Add fresh dill and cover with a lid.

This is always a favorite tuna salad recipe for parties everyone love the pasta.

Place bell pepper under broiler and cook until skins begin to blacken; place in plastic bag and set aside.
Cook pasta and asparagus; remove skins from blackened bell pepper and slice in strips.
Add all ingredients for dressing together in a large bowl; blend well.
Add pasta, tuna, bell pepper, asparagus, onion and tomatoes to dressing in bowl.
Toss ingredients gently to coat with dressing; garnish with basil sprigs to serve.

This is a very hearty tuna salad recipe with lots of flavor!

Mixed tuna with mayonnaise; add potatoes, carrots, peas, half of pimiento, chopped egg and vinegar.
Mix all ingredients until well blended; scoop mixture into a mold or shape in dome on plate.
Chill for several hours.
Turn out on a bed of greens and garnish.