Various types of cheese are known to be the only man made food known and loved around the world with the exception of butter. There have been one or more distinctive varieties of cheese produced in every country. When I was young, we did not have the choices in cheese selection like we do now. Only special stores offered a good selection and still nothing like we have to choose from today. 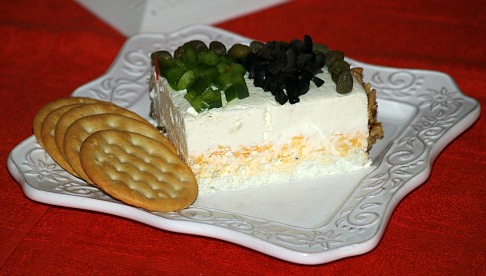 Being the melting pot that the United States is, we are now able to learn and enjoy these different cheeses from around the world. Many of these which were only produced in foreign lands are now produced in this country. Americans are now the world’s largest consumers of all types of cheese.

Although the types of cheese are known by hundreds of different names, there are actually few distinct cheese families. Members of each of these cheese families are basically the same with slight variations due to local customs and preferences. The following are the most popular cheese used and produced in the United States.

AMERICAN CHEESE OR CHEDDAR CHEESE is the most widely used in the United States. Cheddar range from very mild to very sharp in flavor; they can be very soft in texture to very crumbly and range in color from pale cream to deep yellow.

BRICK got its name because it is “brick shaped” and also bricks are used to weigh down the cheese press when making. This cheese has a range from mild to sharp in flavor and is characterized by tiny holes when the cheese is finished.

BRIE is soft and creamy. It is yellow in color with a sharp taste. It has a distinctive odor and a thick moldy crust that is removed before eating.

CAMEMBRET has a thin edible crust with a very creamy (almost fluid) interior. It is made in small rounds or in individual servings.

CHANTELLE comes in red coated disks weighing 5 to 6 pounds. This cheese is semi soft, mellow in flavor and a creamy yellow in color.

CHESHIRE is similar to Cheddar cheese but sharper in the flavor.

COTTAGE is soft uncured cheese made by heating sour milk and draining off the whey leaving the curds.

We are all familiar with CREAM CHEESE when thinking about delicious cheesecake. This is a soft creamy uncured cheese with perfect freshness and delicate flavor.

EDAM AND GOUDA are similar to Cheddar cheese both having a bright red rind, a mild flavor and a rather hard texture. Edam comes in a round ball and Gouda in a disk shape.

ITALIAN TYPES OF CHEESE include a variety of hard cheese like Parmesan cheese, Gorgonzola, Caciocavallo, Provalona, Romano and Reggiano and a soft cheese like Bel Paese. The hard cheeses are usually grated and served on soups and entrees.

LIEDERKRANZ CHEESE is a Native American cheese although it sounds like a foreign name. It is a soft cheese with a sharp flavor and an edible rind.

Of all the types of cheese, LINDBURGER CHEESE stands out in my mind the most. The flavor is mellow and pungent but the odor is something you won’t forget.

MUENSTER CHEESE has a hard and chewy consistency with a sharp flavor. It is often spiced with caraway or anise seeds.

ROQUEFORT CHEESE originated in France but many Roquefort type cheeses are made in the United States. These semi hard cheeses have distinctive blue green veins developed by the mold. The sharpness and character of the flavor is unique in its own.

The state of Wisconsin in the United States is known for their little Switzerland where SWISS types of cheese are produced on a mass scale; Gruyere, Emmenthaler and SAP SAGO. Emmenthaler type Swiss cheese has typical large holes, Gruyere is a processed Swiss cheese and Sap Sago is a Swiss type cheese that often is called green cheese due to the addition of leaves from a clover like plant.

Many SPECIAL CHEESES are produced like smoked and potted cheeses. Brandy and wine cured cheeses also add variety to our choices.

One can find also in supermarkets and specialty markets here in the United States a large selection of soft and creamy CHEESE SPREADS. Some of these are Roquefort, pimento, Old English and Limburger which are good to make sandwiches or to serve with crackers.

Many PASTEURIZED PROCESS cheeses are produced scientifically to offer uniform flavor, texture and perfect cooking quality. These types of cheese will slice perfectly without crumbling and when using to cook with they have smooth melting qualities.

SERVING CHEESE WITH FRUIT OR NUTS

Here is a sample of some great ways to serve various cheeses.

Brie ….French cheese with mild to pungent flavor……Serve with pears 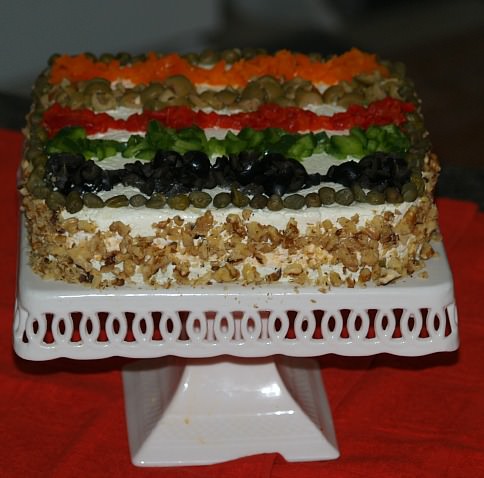 Several types of cheese are used in the following recipe. I am sure you will find it a hit at your holiday or special gatherings.

Carefully layer cheese mixtures in pan in the order that you mix them; refrigerate until set.

To serve loosen with a thin knife the cheese from the sides of the pan.


Invert cheese on a serving plate and remove wax paper.

Thoroughly drain caviars, olives, pimientos and capers. (After draining I place on paper towels to remove all liquid).

Cover each pie shape with 1 of the 8 toppings given (in the order given).

Refrigerate until ready to serve; will serve 40.

NOTE: This time I decided to make this in a square pan; I used chopped walnuts on the sides, black olives, green and orange bell peppers, red pimientos, green olives and capers around the edge.

Combine all ingredients and beat with electric mixer until smooth.
Refrigerate to give added firmness; garnish with parsley
Serve with assorted crackers.