Switzerland has over 400 varieties of cheese. EMMENTAL CHEESE OR EMMENTALER CHEESE is a cheese from Switzerland. Because it was not protected, it is being produced in other parts of the world. We can buy Ementhaler cheese here in the United States as one of the types of Swiss cheese produced here. France and Finland are also known to produce Emmentaler cheese. 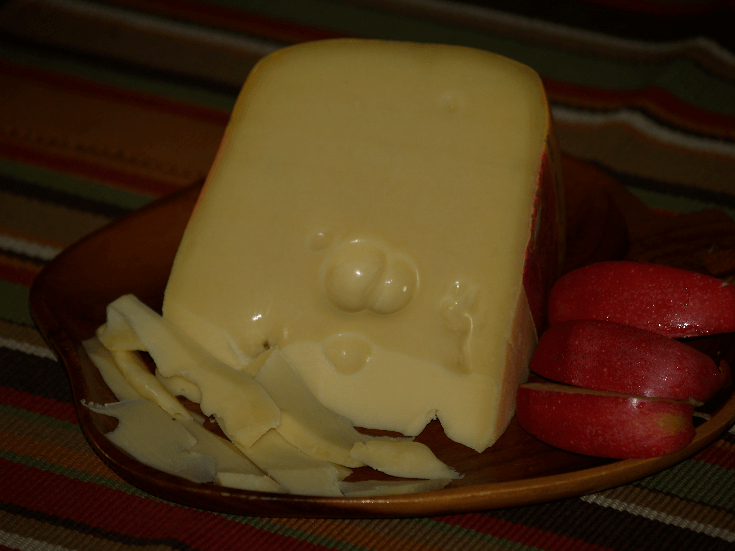 Emmental cheese/ Emmentaler cheese is a yellow semi hard, very sharp tasting cheese. The large holes in this cheese, the easy recognizable characteristic of this cheese was originally caused by a failure to remove bubbles during the processing. These types of Swiss cheese are aged from 4 months to 14 months varying the sharpness in taste.

Of all the Swiss cheeses GRUYERE CHEESE is one of the best cheeses for baking and cooking because it has good melting qualities. Although gruyere cheese is produced in other countries like France and the United States, Switzerland is very famous for it. Le Gruyere Switzerland must be produced under very stringent rules; the cellars to mature the cheese must have a climate close to a natural cave with a humidity of 94 to 98 percent. The temperature for this hard cheese must be consistent from 55 to 57 F degrees.

FRIED CHEESE RECIPE made with several types of Swiss Cheese

Cut cheese into slices about ½ inch by 3 inches.

Sift flour into bowl; season with salt and pepper.

Make a well in center of flour; break egg open in well.

Work egg into flour and gradually stir in half of wine.

Beat well and blend in remaining wine; fold in the egg whites.

From the types of Swiss cheese produced high in the Swiss Alps comes SBRINZ CHEESE. This is a hard and grainy cheese somewhat like Parmigiano Reggiano cheese. It is made with whole raw milk and in Switzerland is considered the father of the hard cheeses. The long aging process produces a very distinctive aroma and will keep for a long time. It is made in huge wheels and has a smooth, deep nutty flavor. It is best when cut in very thin slices to serve.

The APPENZELLER CHEESE comes from the northeast region of Switzerland; Appenzell region. The history of this brownish colored cheese goes back to the fourteenth century. This cheese has unique flavors derived from herbal brine, wines and liqueurs. The curds are pressed into large wheels which are soaked in the brine before aging. This hard cheese is made from cow’s milk and the varying strengths of flavor comes from the different lengths of aging.

The Swiss VACHERIN CHEESE is one of the types of Swiss cheese which can either be in a soft form or a firmer cheese. Vacherin Mont d’Or is the soft form of cheese and is generally made with pasteurized cow’s milk. This is a soft rich seasonal cheese. The firmer cheese, Vacherin Fribourgeois is originally from Fribourg canton Switzerland. This is a stronger more potent cheese, depending on the aging.

One of the types of Swiss cheese which requires developing an acquired taste is SAPSAGO CHEESE; made with a mixture of whey, skim milk and buttermilk. This cheese is flavored with powdered blue fenugreek or called melilot, a sweet clover used like herbs; this makes the cheese a pale green in color and makes for a unique flavor. Sabsago cheese is the traditional cheese of Canton of Glarus in Switzerland. This is a hard cheese with a strong aroma and flavor. It is usually served with other foods grated. Grated Sapsago cheese diluted with softened butter makes good bread spread especially when making sandwiches.

In speaking about the types of Swiss cheese, I have been asked what is Raclette. This subject deserves a whole page for itself and that is what I will do, but for now Raclette is a Swiss cheese. There is also a Raclette grill, Raclette parties and a special Raclette recipe made with Raclette potatoes; all of these interlinked.

What is RACLETTE CHEESE? For this cheese page we will focus only on Raclette cheese. This is a semi firm cheese originating in the Alps in Switzerland but is also made in France. It is made from cow’s milk. This delicate tasting mild creamy cheese has a slightly nutty flavor and is famous for its melting qualities. This cheese became popular for heating on fire (modern day Raclette grill) and then scraping the melted cheese from the large chunk or “wheel” of cheese. Then it would be spread on potatoes, onions, pickles or dried meat to eat.

Sprinkle flour on cheese; toss until cheese is coated.

In fondue pot, heat garlic and wine over low heat until bubbles rise to surface (Do not let boil).

Add cheese mixture, ½ cup at a time stirring until cheese is melted; stir in sherry and seasonings.

Transfer pot to a heat source at the table; ad just heat just until bubbling.

Spear dippers and swirl in fondue with a figure 8 motion; stir fondue occasionally.

NOTE: If fondue becomes too thick, stir in about ½ cup of warm white wine.

Line bottom and sides with overlapping slices of Swiss cheese to form a “crust”.

Pour remaining cream over the eggs; salt and pepper to taste.

Sprinkle the top with paprika; bake 15 to 20 minutes or until eggs are cooked to your preference.