How to Make a Valentine Cupcake Recipe

I learned how to make a Valentine cupcake recipe when I was very young; after the cookies. When I think about making any cupcakes, I think of my sister Gloria. Gloria was a real character! None of my siblings had a birth certificate until the mid 1950’s. Back then we did not need one for anything; not until my brother decided to join the Navy about 1955. Many of my family were in the military at the time but suddenly they decided that everyone needed a birth certificate to join. 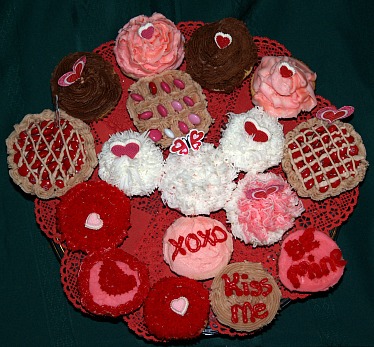 How to Make a Valentine Cupcake Recipe

The reason I learned how to make a Valentine cupcake recipe is because  it reminds me of Gloria. She always celebrated her birthday on Valentine’s Day. Then when Dad ordered our birth certificates and they arrived, several of us (including me) were shocked to find that we were not actually born on the day we thought. Remember back then we were all born at home and we had such a large family; things could have gotten confusing.

Sister Gloria was also one who found her birthday had changed; no longer on Valentine’s Day. Gloria learned how to make a Valentine cupcake recipe which she always baked for her birthday. Would this mean we would no longer get any of her cupcakes? No way! She said she knew they could not be right about HER birthday; she knew SHE was born on Valentines Day.

Gloria continued to celebrate her birthday on Valentines Day until she passed. Red was always her favorite color so Valentines Day was made for her. She loved to bake and everything was decorated in red; even her house had a lot of red throughout.  I could tell you story after story about my sister. She truly was a “trip” but also a great sister.

HOW TO MAKE A VALENTINE CUPCAKE RECIPE like these STRAWBERRY CUPCAKES 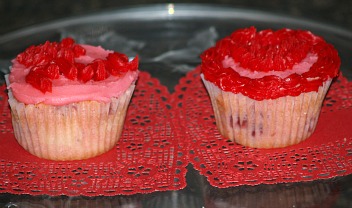 These strawberry cupcakes make a great Valentine cupcake recipe. The pink color is very pretty and the strawberry flavor is great. I like to frost them in a pink frosting.

Red velvet cupcakes are a natural for a Valentine cupcake recipe with the beautiful red color. I love these decorated with white frosting and red heart decorations. 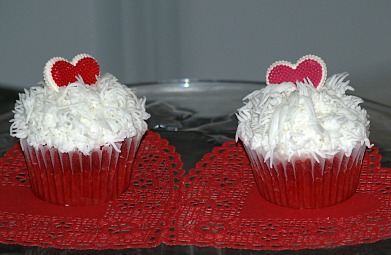 Preheat oven to 350F degrees.
Cream together sugar and shortening; add eggs one at a time beating well after each.
Add cocoa, food coloring, salt, flour, vanilla and buttermilk; blend in well.
Stir in vinegar and baking soda and mix well.
Measure about ¼ cup batter into each paper lined cupcake tin.
Bake about 12 to 15 or until pick comes out clean; cool completely, frost and decorate

Combine flour and milk in saucepan; cook over medium heat and stir until thickened and cool slightly.
Cream sugar and shortening in mixing bowl until light and fluffy; stir in vanilla and cooled sauce.
Beat until frosting becomes stiff and whipped; frost cupcakes and decorate. 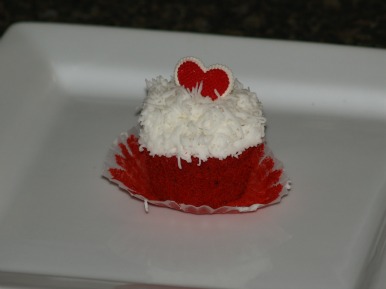 Who doesn’t love Twinkies? This Valentine cupcake recipe is from a Twinkie recipe and is a luscious easy dessert recipe. I love these individual servings for a brunch or buffet table.

Mix cake according to package directions.
Measure about ¼ cup batter into each paper lined cupcake tin.
Bake about 12 to 15 minutes or until tester comes out clean.
Combine and mix together cream of coconut and canned milk.
With fork punch holes in tops of cupcakes; divide milk mixture over each warm cupcake.
Allow milk to soak in cupcakes; refrigerate for a couple hours until cold.
Using thawed Cool Whip or home whipped cream in pastry bag frost top of cupcakes.
Decorate with chocolate curls or red hearts for the special occasion. 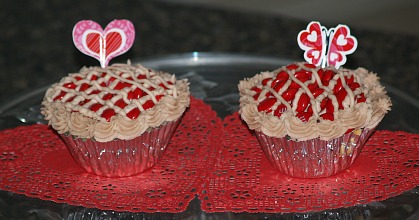 This is a basic white cake recipe to make Valentine cupcake recipes as well as for any time of the year. Vary the recipe by stirring in a few nuts (black walnuts are good), a few well drained chopped maraschino cherries, finely chopped fresh strawberries or a few miniature chocolate chips. Decorate them for any occasion.

Cream shortening and sugar until light and fluffy on medium speed.
Combine flour, baking powder and salt; add to creamed mixture alternately with milk while mixing.
Beat egg whites until stiff peaks form; gently fold into batter.
Fill paper lined cupcake tins 2/3 full with batter.
Bake in preheated oven at 350F degrees for about 15 to 20 minutes or until pick comes out clean.