What is buckwheat? Despite its name, buckwheat is not a wheat variety, nor does it belong to any family of cereals or grasses. The quick growing flowers produce seeds called achene, which look and feel similar to a sunflower seed. They are encased in a hard outer shell which is rarely used to make buckwheat. The interior of the seeds are white, which gives the buckwheat its color, but darker forms of the flour do exist, and these simply use some of the seed coating and darker hull. There is little or no difference in the cooking properties of different colored buckwheat flour.

A simple answer to what is buckwheat good for is that it still gives the same sticking properties as regular flour due to its complex carbohydrate structure which makes it useful for those who want to eat bread and cakes but can’t tolerant gluten. The only differences you may notice is that everything will come out looking slightly darker, and both bread and cakes will have a lighter feel and texture as buckwheat is more reactive than wheat flour.

Buckwheat Around The World

If you’re interested in learning about cooking with grains you’ll do well to look at how other countries use them. The popularity of buckwheat around the world comes from its quick growing properties. Each buckwheat plant takes only 3 months to grow, and is season resistant, meaning that you can get 4 harvests each year. You can get an idea of what is buckwheat used for by looking at buckwheat recipes from:

What is Buckwheat? It can be used in a simple Buckwheat Pancake Recipe 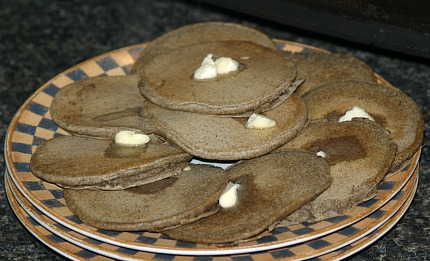 What is Buckwheat Pancakes?

If you’ve never tried it, learning how to cook buckwheat is surprisingly easy and doesn’t differ greatly from using regular flour. By trying this simple pancake recipe, you’ll get a better understanding of what is buckwheat good for in your kitchen.

Combine and beat together the egg yolks, milk and oil.

Gradually add the yolk and milk mixture to the flour mixture while mixing on medium speed,until smooth..

Scoop 1/4 cup of batter for each pancake onto hot oiled griddle or skillet.

When browned and set on bottom side turn pancake over and cook other side.

Sautee almonds in olive oil until golden brown; remove to platter and set aside.
Add garlic, onion and green pepper to pan and sauté until golden brown.
Add groats and chicken stock and blend well; pour mixture into greased casserole dish.
Bake at 325F degrees for 30 minutes; stir in almonds and bake another 15 minutes.
Check to see that groats are soft and plump and all liquid is absorbed.

Combine groats with sour cream; season with salt and pepper.

Spoon half of mixture in bottom of well buttered casserole dish.

Blend egg yolks with cheese; spread the cheese mixture over the groats in casserole dish.

Cover cheese mixture with remaining half of groats; cover and bake 50 to 60 minutes.

NOTE: Text by sticking a sharp knife in center. Knife should be moist but clean.