What is saffron? Saffron has the distinction of being the most expensive spice in the world. Composed of the dried stigmas of the crocus sativus flower, this spice has an acrid taste and a sharp odor. Saffron is sold in two forms: the threads and as a powder.

What makes saffron so valuable is the fact that only three stigmas form in each flower and more than 75,000 flowers are necessary to yield one pound of saffron threads.

What is Saffron in History?

While originating in Asia Minor, the growing belt for saffron stretches from southern European countries into the Middle East and near Far East. In ancient Rome and Egypt saffron was used as a spice, dye, perfume, and medicine. Purportedly, Cleopatra used the spice to add color to her face and ladies of the English court tinted their hair with it. 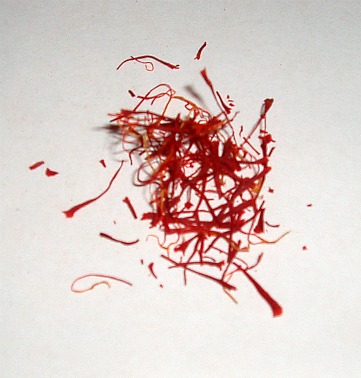 Monks have used it in religious ceremonies and, allegedly, saffron grew in King Solomon’s gardens. Returning Crusaders brought saffron to Europe where it was not only used in cooking but also used as incense.

What is Saffron in Cooking

Saffron can be ground or crushed to impart its spicy tang to several types of foods. An appropriate spice to use with seafood such as bouillabaisse, it is also used in a marinade for fish along with garlic, thyme and vinegar. The spice can also be used in tomato-based sauces, soups, rice dishes, and beef stew. Saffron is also incorporated in some baked breads and pastries. Besides its intense flavor, this spice also lends a yellowish-orange hue to the dishes it graces.

Saffron can impart a rich, warm pungent flavor to vegetable dishes. Traditionally it was used in rich Indian curries and Mediterranean stews and soups. Soak saffron threads in 1 tablespoon water; add the liquid to a cornbread recipe (reduce the liquid in the recipe by 1 tablespoon) and see what a delicious flavor it adds. This can also be applied to cakes, desserts such as flan and biscuits.

What is saffron in sauce? It has a unique spicy tang flavor. The following recipe will provide a lively meal.

Remove the crust from the French bread and moisten it in water.

Mix the pork and veal with one tablespoon of parsley, one of the garlic cloves, egg, bread, salt, and pepper.

Shape into balls and sauté in oil.

Remove when done and set them aside.

Next add onion to the oil with paprika, chicken broth, and wine.

Add the meatballs to the oil and simmer.

Add the remaining parsley, garlic, and saffron. Simmer and season to taste.

What is saffron to dough? It gives it a unique warm spice flavor.

Stir yeast in water and set aside.

In saucepan warm half and half with the butter; when butter melts add saffron and set off to COOL TO WARM.

Combine milk mixture with yeast mixture in a large bowl; Stir in egg, sugar and half of the flour.

Cover the bowl with plastic wrap; let dough rise in a warm place until doubled in bulk about 1 hour.

Turn dough out onto a lightly floured board until smooth and elastic about 10 minutes.

Roll and press dough into a 27 inch cylinder; cut off a 3 inch piece and reserve it for the center of the wreath.

On an oiled baking sheet, fashion the cylinder into a large ring by joining the ends and pinching them firmly together.

With scissors, cut the ring at ½ inch intervals cutting about 2/3 of the way through the cylinder.

Turn the slices alternately to the left and to the right; pat the ring into shape.

Flatten the ball slightly but be certain there is a CLEAR SPACE between the ring and the ball (both will expand during the rising and baking).

Brush the ring and the ball with egg and milk mixture; sprinkle with almond and sugar.

Place cherries at intervals around the ring.

Cover ring with wax paper; place in a warm place and let rise until doubled about 1 hour.

Bake for 45 minutes or until pick comes out clean; cool 15 minutes; carefully move to a wire rack to completely cool.

NOTE: Be careful to support wreath so it does not break.

When completely cooled move to a cake board or plate.

What is saffron to holiday foods? Saffron an expensive and rare spice is often used in special celebrations.

Punch dough down on a lightly floured surface and knead until smooth about 10 minutes.

Knead in raisins; place in a large greased bowl and turn to coat surface.

Cover bowl and let rise in a warm place until doubled about 1 hour; CHILL AT LEAST 45 MINUTES or overnight.

Turn dough out onto a lightly oiled work surface; divide into 3 parts.

Divide 1 part of dough into thirds; shape each piece into a long strand by rolling between palms and the oiled surface to 36 inches.

Combine the strands and braid together; trim off ends to make them even.

Place braid on lightly greased baking sheet and shape into a wreath about 7 inches in diameter; pinch ends together to seal.

Roll trimmings together to make a strand about 12 inches long;; shape in a bow and place over sealed part of the wreath.

Combine the egg and milk; brush over the wreath and bow.

Cover and let rise in a warm place until doubled about 45 minutes.

Transfer to rack and cool completely; press 4 red candles into wreath to use as centerpiece.

What is saffron in soups. Saffron is a favorite because of it unique spice flavor it can be used in a variety of dishes.

Cut ends from plantain and peel away the skin; cut plantain into 1 inch chunks.

In a large heavy pan, sauté onion in olive oil until slightly browned.

Bring to a boil; reduce heat, cover and simmer 25 minutes.

Puree soup in processor in batches adding a little more water if too thick.

Reheat soup before serving; garnish with sour cream and cashews.

What is Saffron in Medicine?

In Indian medicine, saffron’s diuretic properties were employed to treat urinary tract disorders and it was used as a treatment for liver problems. Its antibiotic properties were used to treat skin diseases, infections, and inflammations. In western medicine, saffron has been used to treat headaches and hangovers. As well as serving as a metabolic stimulant, saffron has also been used as an abortifacient. Saffron was also used to regulate a woman’s menstrual cycle. Current medical research indicates some ability of saffron to shrink tumors.

The answer to the question “what is saffron” has many parts. It is a pungent spice that also adds color to the foods in which it is an ingredient. It has been used as a cosmetic, incense, dye, and medicine.