Knowing what you eat can be important and knowing what is sorghum may change the way you look at food. Sorghum grows naturally in many countries of the world and at one time, every culture on earth ate some type of Sorghum grain or syrup. Sorghum grows like corn reaching eight feet tall with a heavy head of rust colored grain on the top. During harvest the stalks are stripped of the leaves; the butt and seed ends are cut off. A pastel green colored juice is then squeezed out of the stalks by pressing them between two heavy rollers. By boiling this juice, a honey like syrup is made which can be used in baking and cooking or simply eating on bread like jelly.

Today not many people eat this beneficial grain or use the syrup commonly known as Sorghum Molasses. Sadly only animals eat this amazing grain, except for the 15 or so percent that is used to produce ethanol. 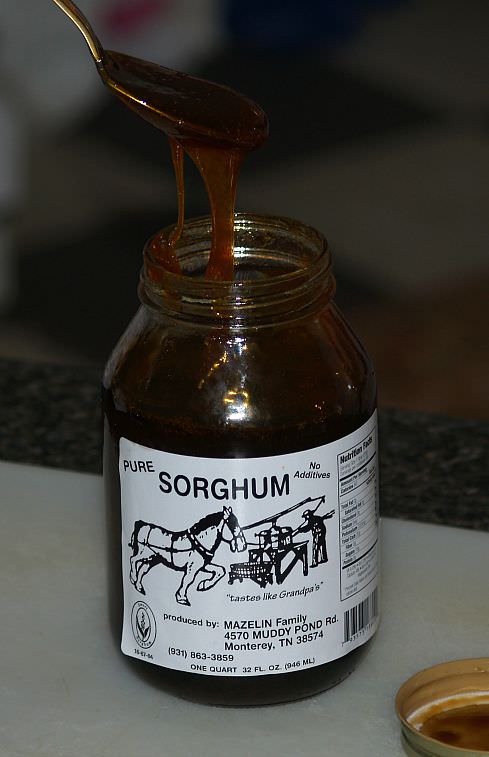 Exactly What is Sorghum?

It is a grain produced by the Sorghum bicolor plant which looks like a cross between Johnson grass and corn, with a Smooth Sumac seed head. The tight packed seed head contains thousands of small black seeds which can be crushed and cooked as a hot cereal, winnowed and ground into flour or sautéed and added to many dishes including salads, soups, and stews, and as a sprinkle for breads, crackers and other baked foods.

What is Sorghum Nutritionally?

Nutritionally Sorghum contains 651 calories in every six ounces of Sorghum, gluten free flour that contains six grams of fat, no cholesterol, 12 milligrams of sodium and 12 grams of fiber. Fiber is essential for proper digestive health and making pancakes using sorghum flour is an easy and nutritional way to improve your digestive health. Sorghum also contains 22 grams of protein, calcium and one six ounce serving of sorghum contains 47% of the recommended daily intake of iron. There are three B Vitamins in Sorghum, Niacin, Thiamine and Riboflavin plus Phosphorus and Potassium.

What is Sorghum Benefits?

Antioxidant health can be improved by learning what is Sorghum as it contains 125 milligrams of Omega 3 fatty acids and 2505 milligrams of Omega 6 fatty acids. Antioxidants including the phytochemicals found in Sorghum help remove toxins from the body, stabilize blood sugar levels, and improve cardiac health. Other phytochemicals found in Sorghum which may help reduce other medical conditions including cancer are policosanols, tannins, phytosterols and phonolic acids which affect a wide range of body systems. Phyto-tannins help improve weight gain naturally and strengthen muscles without stress which may help improve cardiovascular health.

Sorghum is naturally sweet and many people used to grow Sorghum bicolor and take it to a water or animal grist mill to be turned into Sorghum Molasses. Adding a tablespoon of Sorghum Molasses to your morning beverage not only sweetens but provides iron, calcium, B Vitamins and potassium. Eating a hot breakfast made from Sorghum with fresh fruit and milk could provide most of the daily nutritional trace elements and vitamins recommended by nutritionists.

Sorghum can also be sprouted providing a fresh addition to a salad or sandwich or eaten as a side dish when combined with rice. Sorghum is very important to people with a high melatonin count, as this plants molecular structure is more efficiently used by those whose skin tones contain high quantities of melatonin.

What is sorghum in this muesli recipe? Sorghum molasses adds flavor and sweetness to this recipe.

Combine and mix all ingredients EXCEPT the sorghum molasses in a large bowl.

Store in an airtight container; serve in bowls with milk and fresh fruit if desired.

What is sorghum in gingerbread? This adds wonderful flavor to gingerbread!

Cream butter and sugar in a large bowl; add egg and sorghum and stir to blend.

Spoon batter into prepared pan; bake 50 to 60 minutes or until pick comes out clean.

Cool 10 minutes and remove from pan; cut in squares and serve with whipped cream.

Preheat oven to 375F degrees; grease a large pan with cooking rack (or broiler pan) (Make sure you have a solid pan underneath to catch the drippings)

Arrange bacon in a single layer on rack.

Remove pan from oven and drain excess fat from pan.

Combine ginger, mustard, sugar and pepper in a small bowl; sprinkle over the bacon.

Bake bacon 5 minutes or until desired doneness is desired; brush lightly with syrup.