I love Appalachian Mountain Food and really everything about those mountains. Even though I did not grow up in the mountains, I always longed for the mountains. I always said I had mountains in my blood because my family’s roots were from the German mountain area. The first time my husband and I drove through the Appalachians, I beg him to stop and let me walk and enjoy them. Of course, he would not do it! His family’s roots were from these mountains but he did not like this area at all.

I am not much of a “movie watcher” but I do love the little video about the Appalachian area. This video, Christy is based on the book.  It is a true story about a teacher in 1912 who goes to Cutter’s Gap (in reality Morgan’s Gap) from Ashville North Carolina to educate the children of the cove. The nearest town is Alpino (in reality it is Del Rio Tennessee). It is a great story about the lifestyle and the Appalachian Mountain food. It shows how the people foraged for food and hunted for wild game. They would dry herbs, raise bees for honey and produce other items of food to make a little money.

The scarcity of food in the early nineteen hundreds was very apparent in the video “Christy”, often to almost starvation. I still see this today for many and for many different reasons. I have found the groceries are actually higher in price than many places I have been. I have never figured out why! There are never what I call “good sales” as can be found in Ohio, Florida and other places. I do find some good prices at local meat markets, bulk stores and local growers. Items are usually a little cheaper if you are visiting in neighboring cities.

I have found in this mountain area, like the rest of this country, the palate of most has expanded. Now they love the taste of Mexican, Chinese and other well seasoned food. However true this is, there still lingers a longing for the traditional Appalachian Mountain food. Most will say “I would like to have the recipe that Mom used to make”. Most of these old time recipes were cheap to make. They were made with local ingredients like fruits, vegetables and lard. Flour, cornmeal, lard, butter, eggs and milk including sour milk were staples in the home.

I have discovered from “old timers” that recipes for Appalachian Mountain food usually did not contain a lot of ingredients. They were simple but flavorful being seasoned with lard, butter, salt and pepper. Southern buttermilk biscuits and cornbread recipes are on the top of favorite traditional Appalachian Mountain food like Mom used to make. Many also missed persimmon recipes, fried chicken, home cooked grits and bread puddings. Of course, there are many stories about the food and life of growing up in these beautiful mountains.

Appalachian Mountain food includes many wild foods. Ramps, watercress, ground cress, mushrooms and so many other foods are plentiful. Old timers of this area will offer to you great tips for foraging and also the cooking of their favorite foods. Not only are these wild foods delicious but also very healthy. 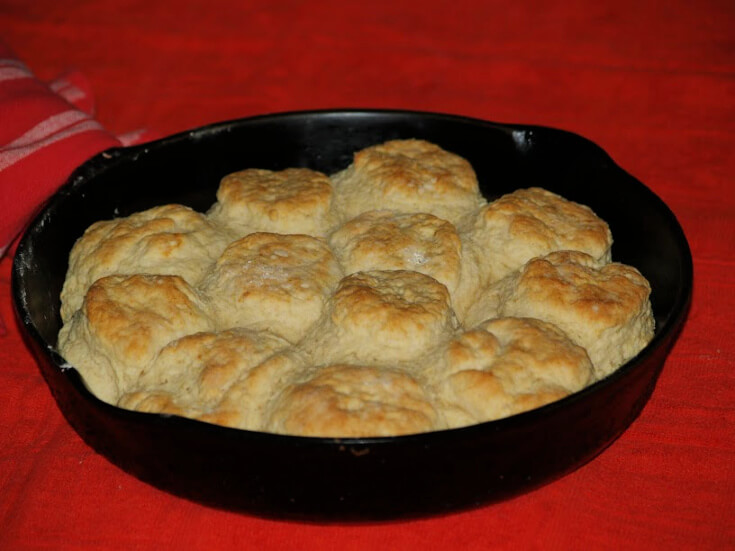 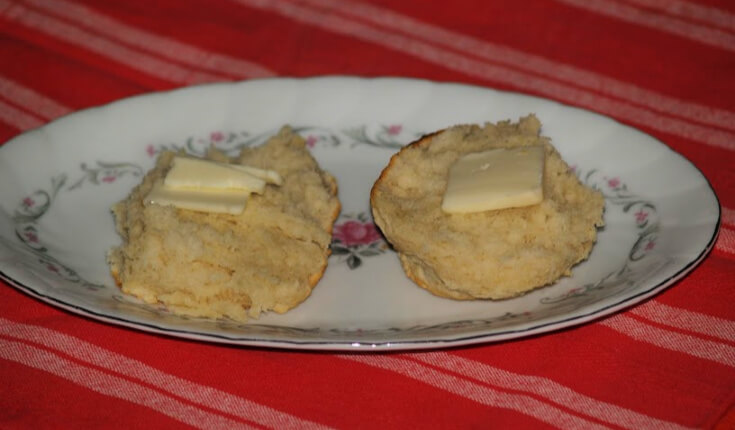 The Appalachian Mountain food as well as other areas (as we did) included lard for the shortening.

Cut butter and lard into the dry mixture until crumbly.

Turn the mixture out onto floured surface.

NOTE: Place biscuits on sheet barely touching each other. 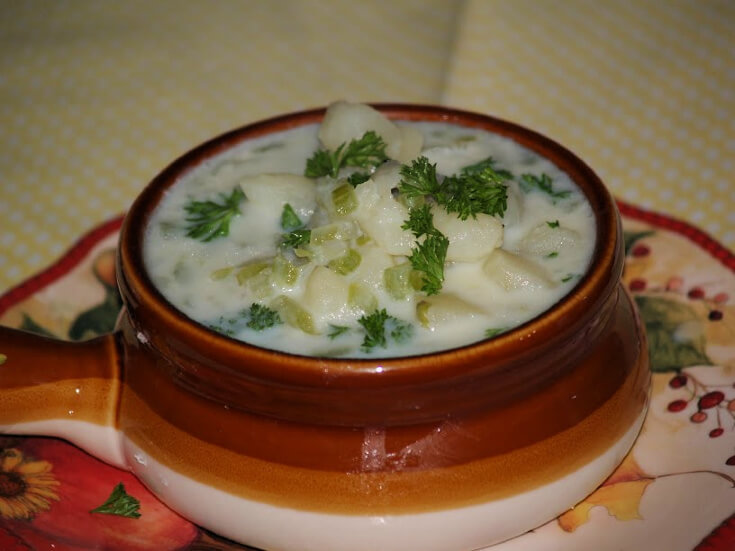 When you ask any local of the area they will tell you that Appalachian Mountain food must include a good basic “tater soup”.

Add butter to vegetables; season with salt and pepper.

Stir milk into the flour stirring to blend smoothly.

Continue cooking and stirring until thoroughly heated and done.

NOTE: Do not boil.

In a large bowl combine 1 ¼ CUPS cornmeal and flour.

Add to bowl the sugar, baking powder, salt and soda; stir to blend.

Mix the sour milk, sour cream and eggs into the cornmeal mush.

NOTE: Use a 9 or 10 inch iron skillet or heavy pan for baking.

Place butter pieces in the iron skillet and place in oven.

When skillet is hot and butter melts tilt skillet to cover bottom.

Pour excess butter over the cornbread batter and stir in.

Quickly pour the batter into the hot skillet smoothing the top.

Bake about 20 minutes until cornbread puffs away from the sides.

Turn out onto a wire rack to cool 5 minutes; serve hot.

I learned right away that the Appalachian Mountain food includes many recipes for cornbread salads. This is where I learned to love this salad.

In a large bowl combine HALF of the bacon with the next 6 ingredients.

Stir into the mixture ONE FOURTH of the cheese.

Add to mixture enough of the mayonnaise to moisten well.

Spoon into pan over the crumbled cornbread.

Of course the Appalachian Mountain food includes many recipes for persimmons and black walnuts. Both of these trees grow wild everywhere in this mountain region.

Cream together the butter, sugar, honey and eggs.

Blend in the persimmon pulp; set aside.

Sift together the flour, baking powder, soda, salt and cinnamon.

Combine the dry ingredients with the creamed mixture.

Stir in the walnuts; spoon into prepared baking dish.

NOTE: Batter will be stiff.

COMBINE in small saucepan; cook over low heat until thickened.

Bring water to boil; stir in grits and return to a boil.

Add a small amount of hot grits mixture to the egg mixture.

Bake for 30 minutes until set; serves 8.

Beans have always been a top selection of Appalachian Mountain foods. I have shared with many how I soak my dried beans overnight to make cooking much faster. Most still choose to cook them their old way requiring much longer cooking time.

Season with salt and pepper.

Many have told me that bread pudding is very much a part of the Appalachian Mountain food recipes.

Scald the milk and butter together; set off heat.

Mix the sugar and cinnamon into the milk mixture.

Stir the eggs, salt and vanilla into the milk mixture.

Stir in the raisins and pour over the bread stirring to mix.

Much of the Appalachian Mountain food was flavored with moonshine. This was one such recipe and has now been readjusted.

Combine and mix in top of double boiler flour and sugar; add milk and butter.

Cook over hot water until thick while stirring; set off heat.

Collard greens are part of the Appalachian Mountain food as well as all the southern states.

Cook bacon and onion in a large skillet.

Add enough water to cover vegetables; bring to a boil.

Reduce heat, cover and simmer until greens are tender.

Season with the salt, red pepper and seasoned salt.

I think we can say fried chicken is not only a favorite Appalachian Mountain food but all over this country.

NOTE: Cook until golden brown about 35 to 40 minutes turning as needed.

Pour the 1 cup water over the chicken; cover and simmer about 15 minutes.

Dip tomato slices in flour, then in buttermilk and then in cornmeal.

Fry in pan of hot oil until golden brown; season with salt and pepper.