How to Make Baked Ham Recipes

Do you know how to make baked ham recipes?  Either fully cooked hams or picnic hams are cooked according to a general timetable. A cooked before eating ham should be cooked to an internal temperature of 160F degrees or a picnic to 170F degrees.

What is the difference between a ham and a picnic ham? Hams are normally taken from the pig’s hind legs. Picnic hams are taken from the front legs and shoulder (often called pork shoulder) area where the meat is slightly tougher requiring more time to cook.  This is an American idea very popular for outdoor summer barbeques or “picnics”.


I learned how to make my baked ham recipes usually in an oven temperature of 325 F degree. For a whole ham of 10 to 14 hours plan about 3 to 4 ½ hours to bake; 5 to 7 pounds about 1 ¾ to 2 ½ hours. A 5 to 8 pounds of a shoulder picnic ham will take 2 ½ To 4 hours to reach an internal temperature of 170F degrees. Plan to have the meat finished baking about fifteen minutes before serving; this allows a time to set to make slicing easier.

I learned how to make my baked ham recipes by scoring the top of the ham in diamond pattern when a glaze is included. Begin brushing or glazing about 30 minutes before the end of baking. (Depending on what type of ham and what type of glaze I am using, but sometimes I baste the ham every 15 minutes during the entire baking time. This makes a nice glaze and a pretty presentation.) 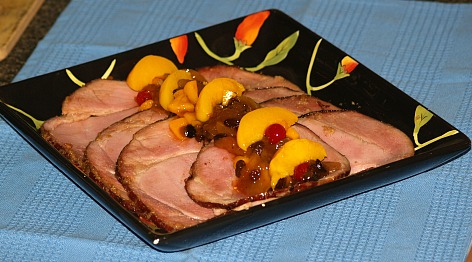 How to Bake a Ham with a Peach Cherry Chutney

Pour peach filling in a strainer over a bowl and let drain; reserve peaches AND sauce. 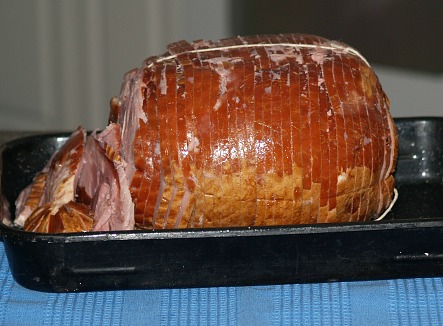 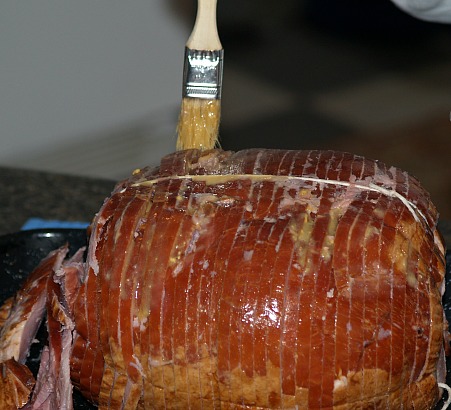 Place ham on lower oven rack and bake for 2 hours or until thermometer reaches 140F degrees.

Cook chopped peaches and the cherry pie filling in saucepan over low heat for 5 minutes.

The following is one of the ham recipes for a Virginia ham. Follow the directions on the ham or on COOKING HAM INSTRUCTIONS in preparing the Virginia ham prior to baking.

After simmering the ham and letting it cool, cut fat into a diamond pattern. Do not cut into the ham. Insert a clove into each diamond. Place ham on a rack in a shallow roasting pan. Baked uncovered for 2 ½ hours.


Combine the sugar, dry mustard, pineapple juice and vinegar. Spread mixture over the ham. Bake 15 minutes longer or until internal temperature is 155F degrees. (Test temperature with thermometer away from the bone.)

This is a great way to dress up  baked ham recipes.

Combine all ingredients until well blended.

Pat crust on ham 30 minutes before it has finished baking; return to oven last 30 minutes or until crusty.