How to Make a Cannoli Recipe

If you are learning how to make the cannoli recipe, you will find it is very familiar to all who love Italian foods. This is among the best Italian desserts. It is sold in almost every Italian and pizza restaurant in the United States.

If you want to learn how to make a cannoli recipe, you will need little metal cylinders called cannelli tubes. They can be purchased usually in gourmet shops or ordered online. You can make these tubes out of ¾ to 1 inch aluminum tubing from a hardware store; cut tube in 4 ½ long to cut tube in 5 ½ inch long. You can also use little wooden rods of the same size. 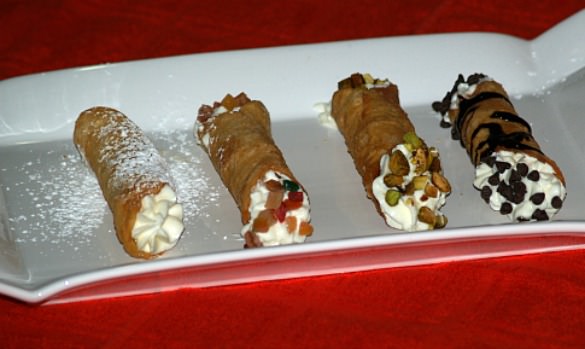 How to Make a Cannoli Recipe

The crisp cream filled cannoli recipe is a most tempting Sicilian treat originating from the Palermo area of Sicily. This luscious dessert was originally created as a snack for the carnival season but soon became a year round food. If you have tasted them, you will know why.

There are now many variants from the original recipe but the basic instructions are the same. A dough is blended together, rolled and cut into about 4 inches square. MAKE IT square or ovals about 3 ½ X 5 inches. After wrapping this dough on the cannolli tubes, the shells are deep fried or baked. They are then filled with a variety of mascarpone cheese, custard or ricotta cheese fillings. Ricotta cheese is the most common used in this Italian dessert today. A pastry bag with a large holed tip can be used to fill shells.

NOTE: A tip to good filling is to use very dry ricotta cheese; this is accomplished by lining a colander with cheesecloth and letting it drain until all the liquid is out.

NOTE: If you are learning how to make a cannoli recipe, another tip is do not fill the shells until ready to serve. I have eaten too many that were filled ahead of time and the shells became soggy; a total waste of a delicious dessert.

NOTE: If you do not have time to make the shells many good quality ones are available for purchase.

HOW TO MAKE A CANNOLI RECIPE 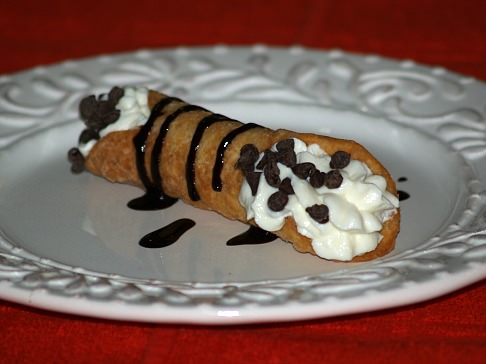 Filling made with mixture ricotta and whipped cream garnished with candied fruit and chocolate.

In a bowl mix the flour, sugar and salt. Make a well in center and add whole egg and butter. Mix with a fork to moisten flour. Add wine, a little at a time, until dough starts clinging together. Using hands shape dough into a ball. Cover and let stand for 1 hour.

Roll dough out on a floured board until about 1/8 inch thick. Cut dough into 3 ½ inch circles; roll circles into a slight oval. Wrap oval dough around cannoli tubes and seal edges with the egg white.

Heat 2 inches of oil in a deep pan to about 350F degrees on a deep fry thermometer. Put 2 to 3 cannoli tubes into hot oil and cook until golden brown. With tongs, remove from oil. Cool for a few seconds and carefully remove the shell from the tube. Cool completely. 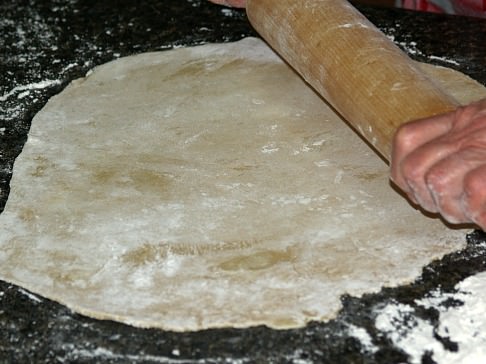 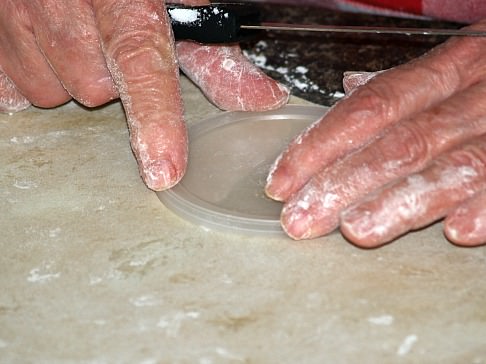 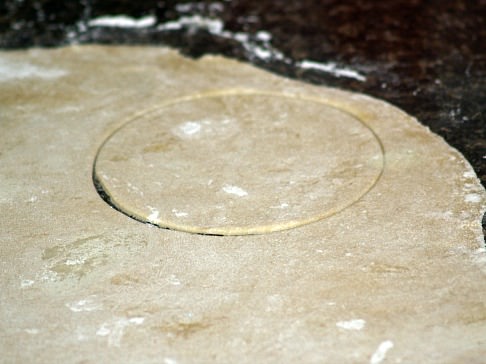 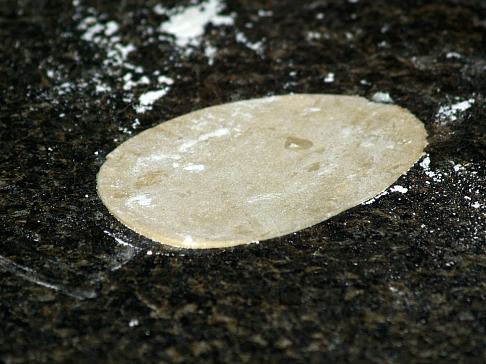 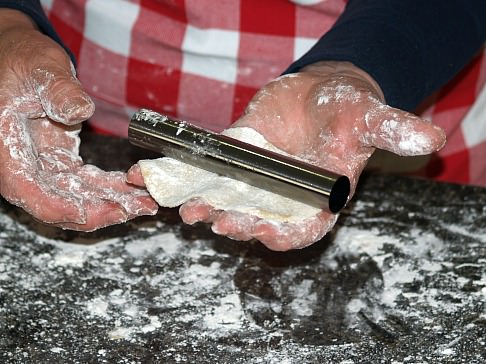 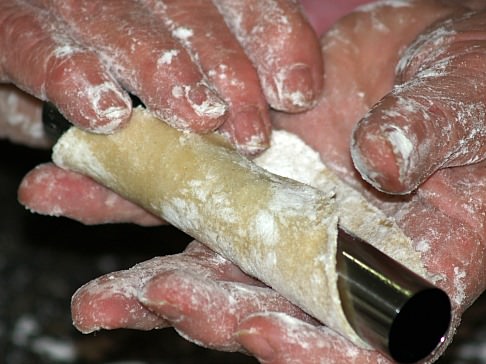 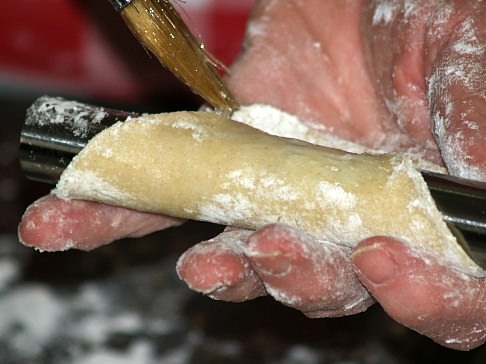 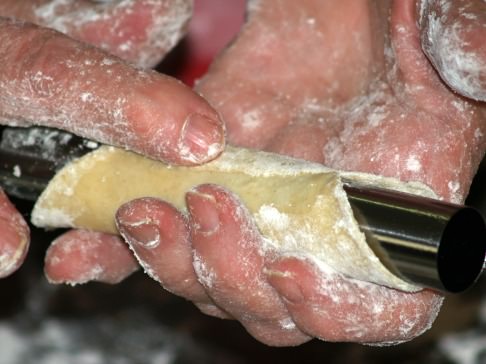 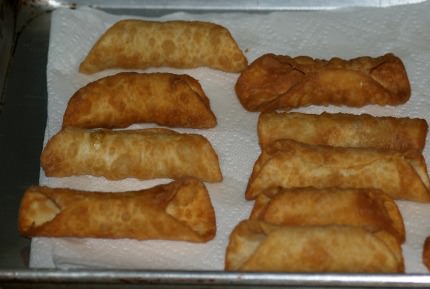 Whip cream until stiff and set aside. Mix ricotta cheese until very smooth and add the sugar and vanilla. Fold the whipped cream into the ricotta mixture. Chill for several hours.

Use a large pastry tube to force filling into shells. Garnish with citron, orange peel and chocolate.

HOW TO MAKE CANDIED FRUIT

Many Sicilian desserts like the cannoli recipe are flavored with candied fruit especially orange, citron and lemon peels. This can also be used in many sweet breads like panatone.

Cut rinds in thin strips; weigh rinds and weigh out an equal amount of sugar.

When syrup becomes foamy, remove from heat and add rinds.

Mix well until all pieces are thoroughly coated.

Lightly oil a baking tray; tip rinds and syrup onto tray and separate pieces with a fork.

Let cool completely and transfer to a jar for storage. 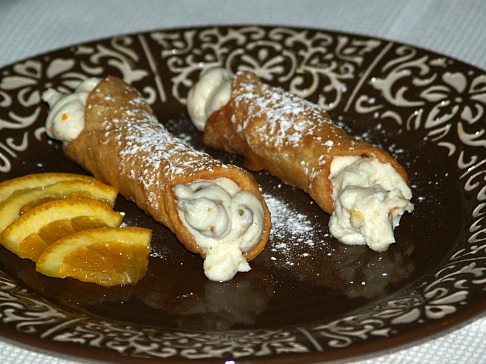 Cannoli with Candied Fruit and Pistachios

This cannoli recipe has a filling with citron, orange peel, cherries and pistachios; dusted with powdered sugar to serve.

Combine flour, 1/2 cup of sugar and salt on work surface.

Knead until you have fairly stiff dough; shape into a ball, wrap in plastic and refrigerate for 2 hours.

Roll dough out thinly and cut into 4 inch squares.

Fry tubes until golden brown on all sides; drain on paper towels.

Fold in chocolate chips and refrigerate; fill shells before serving and dip ends in chopped nuts.

NOTE: If you do not have cannoli tubes, wash and sanitize your broom handle; dry and lay across your table to use for shaping the shells.

Make pancakes with the dough on the cookie sheets; NO MORE THAN 4 TO EACH.

Spoon 1 tablespoon for each shell onto the tray.

With spoon spread out to 3 ½ to 4 inch thin circle making sure edges are not too thin or they will crumble.

Bake about 7 minutes until the center is firm.

With pancake turner remove shells from pan as quickly as possible.

Wrap around cannoli tube or broom handle with the edges overlapping on underneath side (Do not wrap too tightly or they won’t slide off).

Repeat with all shells; cool completely before removing from form.

This shell can be used with any cannoli recipe; it is also baked but made with brown sugar and ground pistachios which give a different flavor.

Mix in remaining flour; add butter and work in with fingertips until resembles coarse meal.

Drop yolk by teaspoons into flour mixture to form dough that just comes together.

Gather dough into a ball; divide into 8 pieces.

Roll one piece of dough out between 2 pieces of wax paper to 1/16 inch thickness.

Place cannoli mold on one long side of dough letting ½ inch of mold extended beyond dough.

Bring dough up and wrap around mold and press seam gently to seal.

Arrange seam side down on prepared tray.

Repeat with all dough pieces; freeze for 15 minutes.

Preheat oven to 350F degrees and bake until golden brown about 15 minutes.

Sprinkle gelatin over juice and let stand 15 minutes to soften.

Combine ricotta, butter and 3 tablespoons sugar in mixing bowl and beat until smooth about 3 minutes.

Whisk in the gelatin mixture; fold in the berries.

Refrigerate just until mixture begins to set about 1 hour.

Whip cream to stiff peaks and fold into ricotta mixture; cover and refrigerate at least 3 hours.

Melt chocolate over low heat stirring until smooth; dip both ends of each cannoli into chocolate ½ inch.

Cut strawberries into fans (slice almost to the stem end and fan out slices); garnish the cannoli recipe.

FOR SHELLS cut shortening into flour until crumbly; blend in cinnamon and sugar.

Gradually add the wine and egg until a dough forms; form into a ball, wrap in plastic wrap and refrigerate 2 hours.

Cut a piece of cardboard into an oval about 3 inches X 5 inches.

Divide dough into 4 parts; roll each part on a lightly floured surface about 1/8 inch thickness.

Deep fry in 2 inches of hot oil until lightly browned (About 400F degrees).

Drain on paper towels and let cool before removing from tubes.

Fill shells and sprinkle with chopped pistachio nuts or dust with powdered sugar.