How to Make Chocolate Cheesecake Recipe

Knowing how to make chocolate cheesecake recipe is knowing how to make one of the most demanded desserts around the world. It was a surprise to me when I first realized how popular this dessert is in all parts of the world; not just in Europe and here in the United States. I have always known that everyone loves chocolate; no matter what part of the world. This “food of the gods” has been the favorite ingredient all over for thousands of years so the chocolate part does not surprise me. 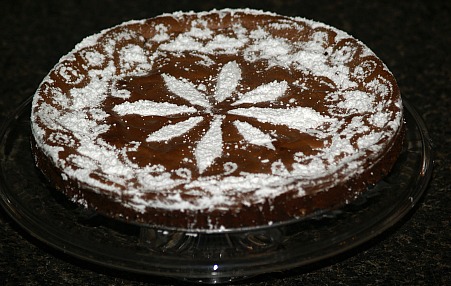 How to Make a Chocolate Cheesecake Recipe

Since I discovered cheesecake many years ago, I knew chocolate quickly became the favorite of Americans. If you know how to make chocolate cheesecake recipe you will be a favorite of all your family and friends.  I guess what has really has been amazing to me is how famous this creamy cheese dessert is in almost every country around the world. To combine the richness of chocolate with the delightful creaminess of cheese (no matter if it is ricotta, cream, cottage or other) has produced a wonderful dessert to satisfy any craving palate.

A lot of effort has been put into learning how to make chocolate cheesecake recipe to come up with variations. Some of this I attribute to the Cheesecake Factory, but much credit is given to individuals who simply love chocolate cheesecake. From all this imagination and work, we now have these luscious desserts like the turtle, black forest, chocolate mousse, crème de menthe, marble, red velvet, peanut butter, chocolate chip and many more. By changing the crust, the cheese filling and the toppings, the possibilities are endless.

HOW TO MAKE CHOCOLATE CHEESECAKE RECIPE

Mix the crumbs, 2 tablespoons sugar and melted butter; press evenly in the bottom of 9 inch ungreased spring form pan. Bake for 10 minutes and then cool.


In a large bowl beat the cream cheese; add the 1 cup of sugar and the cocoa beating until fluffy.

Add the vanilla and add the eggs one at a time beating well after each addition.


Pour mixture over the crumb crust.

Bake for 1 hour or until the center is set and firm.


Remove from oven and cool.

Place chocolate in top of double boiler over boiling water.

Reduce heat to low and stir until chocolate melts; remove from heat and cool.

Pour into chocolate crust; bake for 30 minutes or until outside edges are firm.

Cover lightly with paper doily and sift cocoa powder over the top to decorate; remove doily. 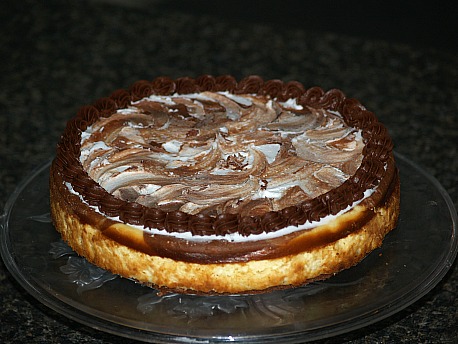 Make a chocolate cheesecake recipe that is marble.

Combine and blend cake mix and oil in large bowl; press into bottom of prepared pan. Bake for 22 minutes and remove chocolate cheesecake recipe from oven. Increase oven temperature to 450F degrees. Combine cream cheese, sugar and almond in mixing bowl; beat on medium speed until well blended. Add eggs one at a time and beat well after each addition. Remove and reserve 1 cup of the mixture; add the melted chocolate and blend. Spoon plain mixture into warm crust; drop spoonfuls of chocolate mixture over the plain mixture. Run a knife through the mixture to marble. Bake in hot oven for 7 minutes. Reduce oven temperature to 250F degrees. Continue baking for 30 minutes or until cheesecake is set; loosen cake edge from pan. Cool completely before removing from pan completely; chill before serving. 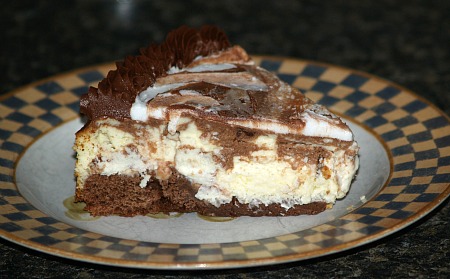 This chocolate cheesecake recipe finds the bit of chocolate in the crust and garnish. Like any other grasshopper pie recipe the crème de menthe lends the special flavor to the recipe only this one has the rich creamy flavor of cream cheese plus crème de cacao. What makes it even better is that it is an easy no bake cheesecake recipe. How delicious!

Combine and blend crumbs and butter.

Press firmly on bottom and up sides to rim of 9 inch pie plate; chill.

Stir in liqueurs and lemon juice; fold in whipped topping; chill at least 20 minutes before serving.

Prepare cake mix according to package directions; set aside.

In another bowl cream sugar and cheese together until smooth.

Add eggs one at a time beating after each.

Pour half of the cake batter into prepared pan; pour in all cheese mixture.

Top with remaining half of cake batter; bake for 70 to 75 minutes.

Cool completely on rack; top with can frosting.

Make a chocolate cheesecake recipe with a touch of almond flavor.

Pour mixture into chilled crust; bake for 40 minutes (Filling will not be set).

FOR TOPPING combine all ingredients; gently spread over the filling.

Cool on rack 10 minutes; run a knife around edge to loosen cake from pan.

TO MAKE CRUST combine crumbs, all sugar and butter in a bowl; blend well.

Press mixture on bottom and 2 inches up sides of 9 inch spring form pan; set aside.

Stir in sour cream; spoon over chocolate crust and set aside.

Let cheesecake in oven for 30 minutes.

OPEN DOOR A LITTLE; keep cheesecake in oven another 30 minutes.

Run knife around edge to loosen; remove sides of pan.

TO MAKE GLAZE combine chocolate and butter in top of double boiler.

Bring water to a simmer and REDUCE heat to low; stir until chocolate melts.

Remove from heat and stir in remaining ingredients until smooth.

Spread over cheesecake while glaze is still warm; refrigerate to firm chocolate.